Homelessness: Cheaper to Fix Than to Let Fester 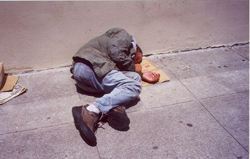 Many of the social, economic and political ills facing the United States will cost tens of billions to fix, from updating the power grid and building a high-speed rail network to dealing with climate change and revitalizing public education. Solving the problem of homelessness should be easy because it will cost billions less to fix the problem than to continue letting it fester.

“The thing we finally figured out is that it’s … cheaper to solve homelessness than it is to put a band-aid on it,” Housing and Urban Development Secretary Shaun Donovan told Jon Stewart when he appeared on The Daily Show in March. “It costs (government) about $40,000 a year for a homeless person to be on the streets.” That works out to roughly $110 a night, or more expensive than staying in a budget motel along the interstate.

President Obama is expected to send legislation to Capitol Hill soon that will launch a vast program to provide housing for homeless people. But since it doesn’t include a tax cut for the wealthy, it’s likely that Republicans will call the effort too expensive and block approval. Yet, like the Affordable Care Act, the new proposal will save federal, state and local governments an enormous amount of money.

Right now, agencies at all levels of government combined are spending as much “to maintain a cot in a gymnasium with 100 other cots as it would cost to rent an efficiency apartment,” says Dennis Culhane, who studies homelessness and housing policies at the University of Pennsylvania. “We are paying for a form of housing that is largely substandard, and we are paying as much, if not more, than standard conventional housing.”

A HUD study backs up Culhane’s assertion. It finds that the cost savings of moving people into permanent housing would be astounding.

For example, putting a family of four in a Houston shelter costs nearly $1,400 a month while the market rate for a two bedroom apartment in the city is only $743. In Greenville, North Carolina – a much smaller city – the price tag for a shelter is $2,269, while rent for a two bedroom flat is just under $600 per month.

It also costs less to put an individual in their own place than paying for them to be in a shelter. HUD determines that it costs government $968 to keep one person in a shelter for one month in Houston, against only $743 to rent a one bedroom unit for the same individual. In Jacksonville, Florida, the price drops to $643 for someone to live in their own apartment from $799 in a shelter.

A USC study in Los Angeles – home to 10% of the nation’s homeless – finds that placing just four chronically homeless people into permanent supportive housing saved the city more than $80,000 per year.

There are other costs associated with homelessness that drive up the total expenditure to obscene levels.

For example, the homeless are more likely to access the most costly health care services. According to a report in the New England Journal of Medicine, homeless people spent four days longer per hospital visit than do people who live in their own place, costing $2,414 per stay.

Moreover, a study of hospital admissions of homeless people in Hawaii revealed that 1,751 adults were responsible for 564 hospitalizations and $4-million in costs. Their rate of psychiatric hospitalization was more than 100 times higher than their non-homeless cohort. Researchers conducting the study estimate that the excess cost for treating the homeless was $3.5-million, or about $2,000 per person.

There’s a lot more than dollars at stake in fixing America’s homeless problem because people’s lives would be much better – and the benefit of that is incalculable.

“I’ve been living in a shelter for four months,” Jack Oppermann states. “I feel like a nobody. I’d rather be in a one room studio with no windows and cockroaches than live like this.”

Opperman works as a day laborer and at odd jobs. He became unemployed nearly a year ago when the company where he was working was bought out and his job was eliminated. He says being on the street is humiliating.

I get what he’s saying. During my own stretch of not having a place to live, there was a constant emotional toll of feeling that I don’t belong anywhere. There was the battle against poverty and hunger, and knowing that I wonuldn’t get anything to eat until tomorrow.

The days were bad but, often, the nights were worse.

That’s when shadows crept up from my unconscious, reminding me that I hadn’t slept in “my” bed in what seemed like forever. It happened when I would have one nightmare dream after another, usually where I was lost in a familiar place; other nights, I dreamt of when I actually had a life.

It’s said that prisoners doing a long stretch in the pen sometimes dream of running through open fields. I dreamt of days when my life was better.

It won’t take a fistful of dollars to bring the homeless in from the cold. The question is whether America has the political will to do something about a problem that costs more to let fester than it would cost to eliminate.

Author and journalist Charley James’ next book is about his experience becoming homeless. When published, Charley will donate a percentage of his advance and royalties to homeless organizations. This piece was earlier published at L.A. Progressive.