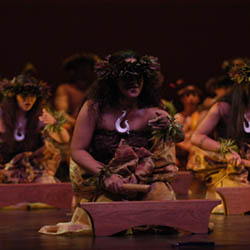 I love Hawaii, especially the Island of Kauai. Hopefully, I can sneak a trip back over there. Meantime, I’ll have to make do with the “Hit and Run Hula” dancers that will descend on San Francisco this weekend. According to their recent press release, “Dozens of hula dancers hit the streets of San Francisco for a day of guerilla performance. Armed with costumes, music, and a large bus, kumu hula Patrick Makuākane and company, Nā Lei Hulu I Ka Wēkiu, will surprise and inspire the unsuspecting crowds with spontaneous Hawaiian dancing. From downtown San Francisco to the Ferry Plaza, Dolores Park and the Castro, Golden Gate Park to the beach, “Hit and Run Hula” will be a unique dance event. Starting at 10am on Saturday, August 15, catch the first hit in and around the Ferry Building and Farmer’s Market. The self-described hula bus, filled with 35 dancers, will then make its way to a variety of high visibility locations and bus friendly stops throughout San Francisco with a final destination event at Ocean Beach.

The idea for Hit & Run Hula sprouted when Dancers’ Group approached Makuakāne to present dance outside of a typical theater setting. When asked how he might contribute to their efforts, he imagined hula, guerrilla style.

As different as this performance will be from Makuakāne’s annual performances, one thread ties them together: the element of surprise. Makuakāne likes surprising the audience—starting with something familiar and adding a twist. In the theater, it’s hula mua, his signature mashup of traditional hula movements with modern, non-Hawaiian music. In Hit & Run Hula, it’s Hawaiian dance out of context. “He likes to break people’s preconceptions of hula and shake things up—the package, the form, the way it’s experienced,” says dancer and hālau business manager Julie Mau.

Sure, some people who see the Hit & Run Hula performance will be those who knew about it and planned to be there, but the rest will be an “accidental audience” as Wayne Hazzard, executive director of Dancers’ Group, likes to call them. Passersby, tourists, people on errands, joggers, and others who don’t expect it will be hit with this energetic and pleasurable hula troup. “The accidentals will get this surprise, this gift, this treat,” says Hazzard. “How fun to see a group of dancers out of the blue, across the street or off in the distance on a hillside.” The dancers will be in for surprises, too. “It’ll be a big challenge for us to change costumes in the bus as it races across the city,” says Makuakāne. “But our hālau thrives on zany adventures.”

Patrick Makuakāne (Director, Kumu Hula) is a creative force in the hula world, and is well known for his innovative choreography. His work is grounded in the traditions and fundamentals of hula, and he labors to keep traditional dances intact as they have been for generations. He has also developed a unique style of hula (called hula mua) that uses modern music to provide a whole new dimension to the poetry of hula.

Born and raised in Honolulu, Hawai’i, Mr. Makuakāne began dancing at the age of 13 and went on to study with some of Hawai’i’s most recognized hula masters, including John Keola Lake and Robert Cazimero. In 2000, he began intensive traditional studies with hula master Mae Kamāmalu Klein in Hawai’i and, after three years, achieved the recognized status of kumu hula (hula master). This achievement culminated in a traditional ‘uniki ‘ailolo graduation ceremony and connects Mr. Makuakāne to a hula lineage stretching back for generations. His studies were made possible by funding from a prestigious two-year Irvine Fellowship in Dance.

Mr. Makuakāne has received numerous awards for his choreography, including several Isadora Duncan Dance Awards (“Izzies”). In 2006, he received a lifetime achievement award from the San Francisco Ethnic Dance Festival.

Founded in 1982, Dancers’ Group assists and supports the San Francisco Bay Area dance community by creating a nexus of resources, expertise and knowledge. Working to advocate for dance in the Bay Area and beyond, Dancers’ Group assists in the creation and production of engaging, original dance. Dancers’ Group serves artists at multiple stages in their careers, and assist dancers, choreographers, teachers, funders, dance companies, students, writers, critics and audiences in the passionate pursuit and enjoyment of art. Through the ONSITE Project, Dancers’ Group presents large-scale public projects that allow the organization to engage new audiences and to increase the visibility of local dance and dance artists.”

Have some fun this weekend and come out and see them.

E. “Doc” Smith is a musician and recording engineer who has worked with the likes of Brian Eno, Madonna, Warren Zevon, Mickey Hart, Jimmy Cliff, and Koko Taylor among others. He is also the inventor of the musical instrument, the Drummstick. He can be reached via http://edoctorsmith.com