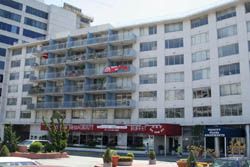 The historic deal brokered by Supervisor Chris Daly between the Trinity Plaza Tenants Association and Trinity owner Angelo Sangiacomo was finalized Wednesday night, ensuring the protection of all existing tenants and saving 360 units of rent-controlled housing. The agreement provides tenants with larger new units on higher floors in the new building at the same rent, a 1000 square foot meeting space, children’s play structure, and ample laundry facilities. The agreement ends a long and often bitter struggle by the working-class tenants of Trinity, and creates an unexpected and entirely unforeseen legacy for Sangiacomo as San Francisco’s first landlord to voluntarily place newly built housing under rent control.

The long-running battle to stop tenant evictions and save rent-controlled housing at Trinity Plaza included rallies, protests, and anti-demolition legislation that won seven votes at the Board only to be vetoed by Mayor Newsom. The veto was followed by a grassroots initiative signed by 20,000 voters that was removed from the November ballot by a Republican judge on highly questionable legal grounds.

Last December, Trinity owner Angelo Sangiacomo offered to avoid a future election contest by agreeing to both drop the evictions and maintain rent control on 360 newly-built units on the site. Since that offer the specific details have been subject to negotiation, as the Trinity Plaza Tenants Association took unprecedented action to ensure that all of the over 200 tenants had opportunity to give input on the proposed agreement.

Last week, Supervisor Daly and a tenant negotiating team met with Trinity representatives to resolve the remaining outstanding issues. Last night, the Tenant Association approved the agreement with only one dissenting vote.

Trinity owner Angelo Sangiacomo has long been known as the “Father of Rent Control” since his huge 1979 rent increases on middle-class tenants virtually forced Mayor Feinstein to demand that the Supervisors pass a rent control law. This landlord, long scorned by tenant advocates, has now set a new precedent for maintaining rent-controlled housing and enabling tenants to benefit from this new housing rather than face eviction.

And as someone intimately involved with this dispute from the outset, let me make this clear: it was Angelo Sangiacomo himself, not his staff, advisors, or family members, who made the decision to face the potential wrath of fellow landlords by agreeing to place a new building under rent control when such restrictions are prohibited under state law.

It sounds very romantic to be involved in a struggle like the International Hotel or Trinity Plaza, but the reality is that it puts a tremendous mental and emotional burden on the tenants whose lives are at stake. The Trinity Tenants faced an emotional roller-coaster, starting with the anti-demolition legislation that passed with a veto-proof eight votes on first reading only to have Supervisor Dufty switch his vote on second reading.

After the tenants psychologically recovered from Mayor Newsom’s veto—after the Mayor spent virtually no time trying to mediate this dispute—excitement was building about the November ballot initiative that would stop the demolition of Trinity. But the court then threw the initiative off the ballot, meaning a new signature drive and a special election slated for this June.

When Sangiacomo made his surprising offer last December, most Trinity tenants were distrustful. It sounded to good to be true, and they were tired of having hopes dashed.
Chris Daly promised the tenants that he would allow the negotiations to proceed at their pace, and that he would get them the best possible deal.

Last night, Daly’s promise was affirmed as one of the great deals for tenants facing eviction in the history of San Francisco was struck. In addition to the 360 rent controlled units, an estimated 160 below-market-rent units will be built, so that over 500 affordable units will be built at 8th and Market.

I got in trouble in a previous Trinity story by forgetting to credit certain groups for their contribution to this great victory. These groups know who they are, and no doubt agree that this is a time to toast the Trinity Tenants for their perseverance and commitment to the citywide priority of maintaining rent- controlled housing.

Nobody would have faulted Trinity tenants if they tried to cut a good financial deal for themselves and moved on. But none did. The tenants always put saving rent-controlled housing as a non-negotiable demand.

On Tuesday, June 14, at 3:00pm in the Board of Supervisors Chamber, the Trinity Plaza tenants will receive official commemoration and commendation for accomplishments benefiting the entire city. Everyone is urged to come down and join the Supervisors and tenants in the celebration.

The Trinity Plaza rebuild is now slated to include over 1700 units. Unlike nearly everything else built by private owners these days, the units will be occupied by tenants, meaning that Angelo Sangiacomo is creating the largest rental housing project in San Francisco history.

The next time the San Francisco Chronicle reports that Chris Daly cannot get along with people, ask yourself who else in this city has reached a win-win deal with Angelo Sangiacomo.