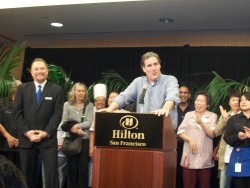 “When you come to a fork in the road, take it,” Yogi Berra quipped in one of his funnier comical observations. That’s exactly what San Francisco Hilton General Manager Michael Dunne did.

He broke from the pack of 59 other hotels still in a contract dispute with 8000 workers and signed a tentative agreement with UNITE-HERE Local 2 in San Francisco, ending an 18th month labor dispute that has rocked this city.

The contract settlement – which is subject to a ratification vote this Friday – was reached during negotiations last Thursday, and was finalized over the weekend. It is a four-year agreement, back to August 2009 and forward to August 2013. It provides for continued, fully-paid health benefits, pension improvements, two dollars in total hourly wage increases, and workload reductions.

A union leaflet congratulates “everyone whose efforts made this settlement possible, especially the STRIKERS at the Grand Hyatt, Palace, St. Francis, Hyatt Regency, and the Hilton (twice!!). These most militant actions and the countless picketlines, civil disobedience, marches, rallies and delegations are the fuel which power our BOYCOTT machine.”

The Hilton takes up a full square block of prime downtown real estate with two giant towers overlooking the bay waters and grand skyline. According to Local 2 president Mike Casey, the city’s largest hotel is also way ahead of others in stature as well: “It showed itself to be a real leader in San Francisco’s biggest industry.”

In fact, Hilton Worldwide also reached agreement with workers in Chicago and Honolulu.

Our friend Yogi Berra is of course best known for another of his brilliant catch phrases: “It ain’t over till it’s over.” This is also part of our story as it turns out.

“This is a big step forward for us,” said Guadalupe Chavez, a room cleaner at the Hilton and executive board member of Local 2. “I’m so glad the contract is settled but we’re going to keep on fighting for our brothers and sisters at other hotels.”

Mike Casey echoed this sentiment when speaking at a March 7 press conference announcing the tentative agreement. “This is a watershed moment but we are by no means over. We are going to refocus our energies and strengthen our boycotts and other actions until the other 55-plus hotels come to their senses.”

The list of remaining major adversaries includes the Starwood, the Intercontinental and the Marriot. Expected to be the most difficult is the notoriously anti-union Hyatt Corporation which is largely owned by the billionaire Pritzker family “who just recently cashed in another $800 million in stock options,” Casey told reporters huddled around him at the press conference.

“No hotel is going to gain a competitive advantage over the Hilton because of signing this breakthrough agreement. It just won’t happen,” Casey emphasized.

General Manager Dunne shook his head heartily in agreement and smiled broadly just as he had when he heard the good news that the union called off their boycott.

Carl Finamore is delegate to the San Francisco Labor Council, AFL-CIO. He can be reached at local1781@yahoo.com