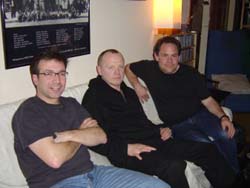 Improvisational music is alive and well at Market Street’s “Luggage Store Gallery”. The gallery’s long running experimental music series, hosted by Bay Area veteran improvisers/sound artists, Rent Romus and Matt Davignon, have brought some of the most critically acclaimed artists of the genre, from legendary guitarists like Henry Kaiser and Fred Frith, to the inimitable improv pianist, Cecil Taylor.

Last night’s performance, amid the beautiful green walls and a fantastic musical art installation, found the debut of electro-saxophonist Jaroba, as well the highly anticipated debut of the Bay Area’s “High Vulture”. Led by the incinderary guitarist of the famed group MX-80, Bruce Anderson and his improv cohorts, drummer John Moremen, and bassist Bill Raymond, High Vulture, screeched, swooped, soared, and even soothed most effectively under Anderson’s guidance and special effects. This music is not for the squeamish, however, if you are bold enough to take the journey with High Vulture, you may find them a trip well worth taking.

Their Thursday night performance began with Anderson, who seemed to find the most beautiful, yet dissonant harmonics, and then “loop” them, and build yet another soundscape, and yet another on top of that. Once Moremen and Raymond powered their way towards it, Anderson would shift yet again, and a wonderful sort of distorted game of hide-and-seek would begin again.

Anderson’s ability to shift his textures from the dark-buzz-saw-like colors one moment, to an almost pastoral distortion the next, and then blend them again, only to shred them apart, was nothing short of amazing. Somehow, almost inexplicably, High Vulture would then grind to a halt, so quietly, as if stopping on a lonely roadside at night. As High Vulture continued to their small, but appreciative audience, there were even a few moments during their set, when the trio actually reminded me of the original Tony William’s Lifetime, with John McLaughlin, Jack Bruce, and the late Larry Young. A friend sitting next to me said afterwards, “That was a workout…” High Vulture’s new CD, is entitled “17”, and can be found on the Curator label.

“Jaroba”, aka James Robert Barnes, is a “musician, photographer, interviewer, and actor”, all rolled into one. Newly relocated to Davis, Ca. from Nebraska, Jaroba has performed solo and improv collaborations with groups like, the Acme Improv Ensemble, (with Shane Schieder), the Liberation Surrealist Duo, the Micro-climate from New Zealand, and with the Lincoln, Nebraska based “Improve Ensemble Howloosanation”, where last year they performed at the John Cage “MusicCircus” festival, at the museum of Modern Art in Chicago.

Jaroba’s use of electronics, and his bass clarinet, allowed him to “loop” himself in real time, and create nice, and complex harmonies on the spot. Watching him conjured memories of another great improv saxophonist, Peter Broztman, of Bill Laswell’s legendary “Material”.

Improvisational music is often a rare commodity, even in many larger cities; Washington, D.C. once boasted the fabulous “D.C. Space” and the original “Madam’s Organ” was home to the groups like “The Muffin’s, and the “Bad Brains”, Seattle’s underground scene still thrives with groups like “Critter’s Buggin'”, and New York’s “Knitting Factory”, like it’s predecessor, the famed “NY Loft” series, still manage to blend both jazz and improv on a regular basis. With the advent of ensembles like the “Bad Plus”, and the face of Market Street evolving everyday, let’s hope The Luggage Store Gallery, and it’s forward thinking owners, Laurie Lazer and Darryl Smith, can continue this valuable outlet for the challenging and pioneering artists of San Francisco’s “free” musical realm.

E. “Doc” Smith is a musician and recording engineer who has worked with the likes of Brian Eno, Madonna, Warren Zevon, Mickey Hart, Jimmy Cliff, Paul McCandless, Jack DeJohnette, Sandip Burman and has performed with the improvisational band, “Feat of Clay”. He is also the inventor of the musical instrument, the Drummstick. He can be reached at edocsmith@comcast.net