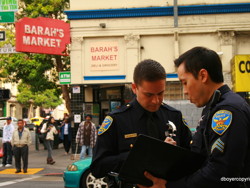 After nearly two years of diligent police work and follow-up at the municipal government level, City Attorney Dennis Herrera and Police Chief Greg Suhr announced on January 30 the filing of lawsuits against two problem businesses in the Tenderloin. The suit charges the businesses with providing safe havens for the local drug trade, fencing stolen goods, and other illegal activities. Both promised a continued commitment to investigating other violators of the law in the Tenderloin business community. Across the street from one of the violators, Barah’s Market (Turk & Leavenworth), Herrera announced the City is seeking a one-year shutdown of, and heavy financial penalties against, Barah’s and the Razan Deli, at the corner of Ellis and Jones. “We’re not going to tolerate businesses that are taking advantage of the population in this community,” he said.

Tenderloin District Captain Joe Garrity explained the operation his undercover officers had undertaken over a sustained period of time. The nearby Walgreen’s location, on Market Street, provided product to the department. Officers then posed as shoplifters and offered to sell the goods to every retail business in the neighborhood. To make the case, the officers had to explicitly indicate that the goods had been stolen, and the businesses had to purchase them and make them available for resale.

Garrity and Suhr both stressed that, in their words, “99.9% of the businesses” refused to take the bait. Barah’s and Razan, however, knowingly received stolen goods, and two other businesses have been issued warnings for unspecified reasons related to the undercover operation. Officers also made extensive recordings of drug traffic in and around Barah’s and Razan, described by Herrera at one point as “hours of video” of illegal activity.

“This has really been a coming together of public, private, and community interests,” said Suhr, who commended Garrity and his officers for intensive police work, the Drug Enforcement Administration for providing assets and resources, Walgreen’s for providing products, and the Tenderloin community for helping the city focus its efforts with numerous calls for service—a combined 192 referring to Barah’s and Razan, according to Herrera. “Any time you hit at the heart of a violator’s business, you make the neighborhood safer,” he added.

It does not appear, at this time, that any action will be undertaken with the state Alcoholic Beverage Commission to strip Barah’s of its off-sale liqour license. According to an insider close to the case, the city has had very limited success with the ABC in getting such licenses revoked in the past, despite having put together successful investigations. “Frankly, I don’t put a lot of stock in their enforcement,” said the insider, who added that all the city can do is build the strongest possible case and present it to the state for consideration.

“The Tenderloin is one of our most vibrant neighborhoods,” said Herrera, noting that it’s often a first stop for immigrant populations and young people arriving in the city, and a place for elderly San Franciscans to find affordable housing. “That’s why it’s so egregious when you a business taking advantage of the most vulnerable populations in this city.”

In addition to a one-year shutdown for both businesses, the city will be seeking $25,000 nuisance fines, $2,500 fines for each individual violation, and court costs under the California Drug Abatement Act, the Unfair Competition Law, and other state and local laws. Herrera also promised that additional filings would be coming soon, in an attempt to get some early actions taken against the businesses as the process plays out in court.

Randy Shaw, Director of the Tenderloin Housing Clinic (and editor of Beyond Chron), cheered the city attorney’s action. “These suits target two of the worst public nuisances in the entire neighborhood. In 1994, I joined with Neveo Mosser and over two dozen residents in suing the Barah Market for allowing illegal drug activities on their premises. After cleaning up its act, the problems resumed. Thanks to Captain Garrity, Chief Suhr, and City Attorney Dennis Herrera, a critical corner of the Tenderloin will soon be reclaimed.”

The owner of Barah’s declined to speak to the media, but a staffer on-site said that the business was unaware of the nature of the charges and denied responsibility for the presence of drug dealing around its premises. The staffer also complained that other problem businesses in the neighborhood were not being targeted.

“This is not a commentary on [all] businesses in the Tenderloin,” Suhr emphasized. Herrera said that the suit was being filed against “the most serious violators,” and affirmed that most businesses had not been found to be creating problems in the neighborhood.

He was clear, however, that investigations into Tenderloin business practices are ongoing, and that should any further violations be discovered, with regard to drugs, alcohol, fencing, or any other illegal activity, they will be dealt with in a similar fashion. “This is what we should be doing,” said Herrera. “We hope that this can help create an environment where the community, young and old, can thrive.”