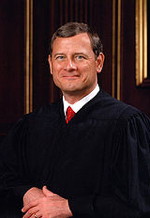 On March 27, 2012 I wrote, “Why Supreme Court Will Uphold Health Care Law.” I stated, “Chief Justice Roberts has a much broader agenda than voiding a moderate health care law that avoids single-payer and even a public option. Roberts seeks to roll back virtually every prior Supreme Court ruling that his conservative allies oppose, and affirming the health care law gives him the political space to accomplish this.” The oral arguments had me doubting my prediction, but Roberts ultimately fulfilled my expectation. The ruling’s biggest impact: instead of Republicans being able to argue that they supported health care reform but not Obama’s “unconstitutional” law, the GOP now has no cover for its opposition to providing basic medical care for millions of Americans.

We may have to reassess our view of President Obama as a weak leader who cannot escape bad luck.

Regardless of the motives, Obama’s support for gay marriage, legalization of DREAM Act immigrants, and steadfast insistence that the Supreme Court would uphold health care showed a strength missing during much of his first term.

And remember how the combination of rising gas prices, Europe’s economic crisis, and bad weather led many to see Obama as operating under a dark cloud? A court ruling throwing out his signature achievement seemed to be part of this larger patter.

Now, the Court’s ruling is joined by steeply falling gas prices, a revived home sale market and the avoidance of a European fiscal meltdown to put wind behind Obama’s back.

Why the GOP is Ballistic

Politics aside, the main reason the GOP is furious over the court ruling is that it has removed their excuse for opposing Obamacare.

Mitt Romney, national Republicans, and conservative activists all claimed to care deeply about ensuring health care but argued they could not support an unconstitutional law. Now that their own Chief Justice has upheld the law, opponents have nothing to hide behind.

Calling for “Full Repeal” is a joke. Particularly absent specific plans to replace it.

The GOP responded to the Court ruling as it did to Barack Obama’s election: as an illegitimate power grab. Their problem is explaining why Justice Roberts is part of this great Socialist conspiracy, a contradiction even FOX News will have difficulty unraveling.