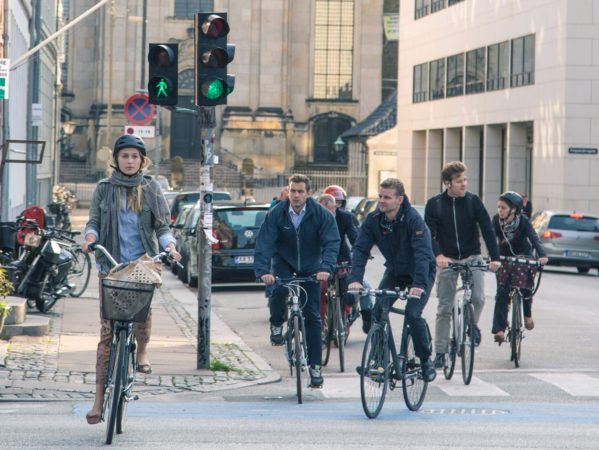 A massive new study of commuters in the United Kingdom reveals that people who bike to work tend to live longer and are at lower risk of heart disease and cancer. While the study establishes correlation but doesn’t prove causation, the size of the sample and the magnitude of the effects strongly suggest that biking to work can yield major health benefits.

People who bike to work have a mortality rate 41 percent lower than people who take transit or drive, and are also significantly less likely to develop heart disease and cancer, according to the study published last week in the British Medical Journal.

The study tracked 263,450 adults from England, Scotland, and Wales over five years. It controlled for a wide variety of factors, including the risk of traffic crashes, to compare the incidence of heart disease, cancer, and death.

Two of the researchers break it down in a post at The Conversation:

We adjusted for other health influences including sex, age, deprivation, ethnicity, smoking, body mass index, other types of physical activity, time spent sitting down and diet. […]

Results were less spectacular, though still robust, for people who combined cycling with a “non-active” commute, like driving or taking transit. This group had a 24 percent lower risk of death, including a 36 percent reduction in the risk of dying from cancer.

People who walked to work also saw some health benefits, primarily due to a reduced risk of developing and dying from heart disease, but the study found they did not see a reduced risk of all types of mortality. The benefits for people who walked to work were not as large as those for people who biked, the researchers say, possibly because the physical activity was not as intense as cycling, or because commutes on foot don’t typically cover as much distance as commutes by bicycle.

The study is notable because it concerns a large population in a region where bicycling is not already a dominant form of transportation. (Only 3 percent of UK commuters bike to work.) Investments in bike-share, bike lanes, and other forms of cycling infrastructure, the authors write, “present major opportunities for the improvement of public health.”