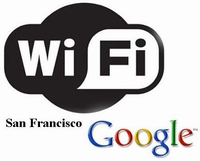 These are the public relations shibboleths driving the latest installment of Mayor Newsom’s failed effort to bring a Google/Earthlink citywide WiFi network to San Francisco: Prop J on November’s ballot. Earthlink’s serious financial problems with its municipal WiFi networks across the country compelled it to withdraw from negotiations with the City in August. These negotiations, largely conducted over the past two years behind closed doors and without meaningful input from the Board of Supervisors, have served to obscure a number of crucial issues. These issues deserve careful public scrutiny before San Francisco logs on to another round of this PR-motivated fiasco.

1. WiFi networks are less reliable than wired networks. Like cellular phones, WiFi uses microwave radiation to transmit and receive its signals. Radio signals from WiFi can be blocked by buildings, trees and other objects, and transmission quality is even subject to atmospheric conditions. Since WiFi operates at the same unlicensed carrier frequency as cordless phones, microwave ovens, and other consumer devices, it is more subject to interference problems than a licensed wireless cellular network. WiFi network speeds are also significantly slower than its wired counterparts. Fiber-optic cable, for example, is as much as 1,000 times faster than WiFi.

2. Serious privacy issues are not considered by Prop J. As written, Prop J only addresses the sharing of network user information with third parties. It does not prevent WiFi providers themselves from compiling and retaining information about users’ web searches (one major reason Google signed on to the Earthlink deal). The American Civil Liberties Union, Electronic Frontier Foundation and other privacy groups have consistently raised these issues with the City throughout its negotiations with Google and Earthlink. Prop J addresses none of these concerns.

3. Wireless networks are more difficult and expensive to secure than wired networks and are therefore vulnerable to identity theft and unauthorized surveillance of users. Unlike wired networks, wireless networks can be subject to attack wherever a signal is present. The Chronicle recently reported on a San Francisco resident arrested for using an antenna to intercept credit card information being transmitted over a wireless network. Although encryption makes such attacks more difficult, encryption methods do not eliminate this problem.

4. WiFi raises serious health and environmental issues. Citywide WiFi would require at least 2,200 microwave transmitters to be placed on light and utility poles, in addition to the more than 2,500 antennas for cellular phones already installed throughout the City. Meanwhile, no scientific studies have been conducted to date specifically on the health effects of WiFi exposures. Studies have been done on exposures to low-intensity microwave radiation of people living near cellular phone base station antennas in Spain, Germany, Israel, the Netherlands, Egypt and Austria. All seven studies document significant adverse health effects. In the German and Israeli studies, these effects include increased rates of cancer. In September, the European Environment Agency issued a statement urging caution before proceeding with WiFi. Yet Mayor Newsom has placed Prop J on the ballot without informing the public of the potential health and environmental impacts of WiFi as required by the City’s Precautionary Principle ordinance.

5. Prop J completely ignores a comprehensive study of the alternative of a fiber optic broadband network which the City commissioned and was published this past January (available on the Department of Telecommunications and Information Services website.)

With Earthlink now out of the picture, the City has an opportunity to begin a new public dialogue on how best to address the question of providing Internet service to disadvantaged and low-income individuals and communities. To be truly meaningful, any such dialogue would have to fully consider the issues discussed above. Unfortunately, Prop J is another attempt to foreclose this dialogue and commit the City to a ‘free’ technological solution that may not be worth the price.