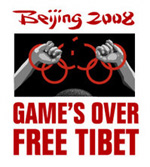 On April 9th, San Francisco will be the only city in North America to host the 2008 Olympic Torch relay for the Beijing 2008 Summer Olympics. San Francisco is home to North America’s largest overseas Chinese population. Thirty percent of the City’s population was either born in China, or is of Chinese ancestry. Events in China are covered here with more scrutiny, whether in the English or Chinese language daily press.

Protests started March 10th in over twenty-five places across Tibet, and in four neighboring provinces with large Tibetan minority populations. The date echoes earlier Tibetan protests. These recent events have initiated a fierce local debate and caused House Speaker Nancy Pelosi to speak out against human rights violations by the Chinese government.

Pelosi left Washington with her husband, Paul, to visit the exiled Dalai Lama in Dharamsala, India on March 21st. The Dalai Lama has lived there since the Chinese People’s Liberation Army crushed large scale protests in Lhasa on March 10th, 1959. According to published sources, 86,000 Tibetans died as a result of those protests. China has asserted since 1949 that Tibet is part of China. Most of Tibet has been occupied by the People’s Liberation Army since October 1950. In March 1989 there were also large scale protests in Tibet against Chinese occupation. As a result, China imposed military rule on the province.

The latest protests have resulted in 140 deaths, according to Tibetan sources. The Chinese government counters that 22 people died, and 13 of those were caused by fires set by Tibetan protestors. China’s continued occupation, suppression of religious freedoms, and its repopulation program involving the settlement of Han Chinese in Tibet are at the root of the present conflict.

The world’s attention is focused on China because of the upcoming 2008 Beijing Olympics. Pelosi said the Tibetan protests represent “a challenge to the conscience of the world.” Additionally, Pelosi said, “If freedom-loving people throughout the world do not speak out against China’s oppression in China and Tibet, we have lost all moral authority to speak on behalf of human rights anywhere in the world.”

In San Francisco, reaction to these events is focused on the April 9th Olympic Torch event. Mayor Gavin Newsom and his Board of Supervisors allies Carmen Chu and Sean Elsbernd have resisted local calls to protest China’s Tibet crackdown. Supervisor Chris Daly is now sponsoring a resolution concerning what the Mayor actually does when the Olympic Torch is received here on April 9th. Daly asks that the Mayor note that the Olympic torch is “received with alarm and protest.”

In a March 20th Board of Supervisors committee hearing, Chu moved to strike language critical of China’s human rights record. On a 2-1 vote Elsbernd joined Chu in striking the language, with Supervisor Jake McGoldrick dissenting. That day McGoldrick was lobbied by a representative of the local Chinese consulate, but dissented anyway. Daly has vowed to reintroduce the critical language before the entire Board of Supervisors at its April 1st meeting.

To maximize its clout in local elections, elected officials who make up the San Francisco Democratic establishment like Mayor Newsom, Speaker Pelosi, Senator Dianne Feinstein, former Mayor Willie Brown and former State Senate President Pro Tempore John Burton act as a bloc, and make their individual endorsements in contests accordingly. This is the essence of the “machine” that local progressives have railed against with mixed success since the 1970s.

However, in this case Pelosi is at odds with a local Democratic establishment that prefers not to offend Beijing. Pelosi has a history of criticizing Beijing’s human rights record. But the visit to Dharamsala, and issuing statements critical towards China about the Olympics in the run up to the Board of Supervisors vote on April 2nd suggests local political factors also are in play.

While Pelosi has never had a strong local challenge since winning her Congressional seat in 1987, she has a political antenna for what motivates her constituents. Among left-liberal voters there is enormous discontent over the Iraq war and some frustration over the fact that Congress has not shut down funding for it. On February 5th, Barack Obama carried Pelosi’s Congressional district against Hillary Clinton, who voted to authorize the Iraq invasion, by over 18,000 votes.

On March 16th over 500 people attended the Unitarian Church on Franklin to listen to antiwar activist Cindy Sheehan speak. Sheehan is now running against Pelosi as an Independent, and is traveling the country to raise funds to do it. Pelosi’s district includes all of the City’s most progressive and left leaning neighborhoods. While Pelosi’s stand on war funding, or her support of the USA Patriot Act in 2001 might not poll well, Pelosi’s willingness as House Speaker to challenge Beijing over Tibet is political capital she can bank.

This piece will also appear in the West of Twin Peaks Observer.