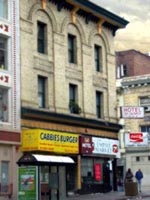 The most vulnerable people in our country are under a deluge of attacks. George Bush has introduced his 2007 budget aimed at cutting 141 social service programs which include completely eliminating some and drastically slashing services to others, particularly for seniors. More than 10,000 trailer homes sit empty and deteriorating in Hope, Arkansas while a federal judge has ordered that FEMA no longer needs to directly pay for hotel rooms for the predominantly African-American victims of Hurricane Katrina. And in San Francisco, we have a surplus of market-rate housing, more than 1,200 units and thousands in the pipeline. But what’s needed the most is not getting done; we’re short more than 5,000 affordable rental units, and Mayor Gavin Newsom now plans his next Republican-style assault on the most vulnerable San Franciscans: “I’ve come to the intense desire to shut down our shelters.”

Last year, A Man’s Place in the Rincon Hill Redevelopment Area was closed while Kate White of the Housing Action Coalition proclaimed with a forked tongue that no one would be displaced from the area, and 100 vulnerable San Francisco men, mostly seniors, disabled, and immigrants, found themselves without a place to sleep. Another 35 shelter beds were lost at Dolores Street Community Services.

Shelly Roder, Executive Director of the St. Boniface Neighborhood Center, reports that on March 31 another 80-100 shelter beds will be lost at the St. Boniface Shelter, and there’s no way to stop the closure at this point. Additionally, because of lack of adequate space and/or funding, other shelters will be closed or limited in the number of vulnerable San Franciscans they will be able to help.

On Monday, housing justice activists expressed their concerns and in one unified, militant voice demanded that The City’s shelters be saved from the Mayor’s Republican-style attack on the most vulnerable. Encouraged and led by Supervisor Chris Daly, concerned San Franciscans packed the Government Audit & Oversight Committee meeting for a two-and-a-half-hour hearing to address the history of shelter bed closures, the traumatic effects of closures on homeless men, women, and children, and whether the Mayor’s Care Not Cash program has been helpful or detrimental for The City’s homeless.

Speaker after speaker offered either their personal story or demanded that the Board of Supervisors save our shelters. If you could not attend the hearing, it’s worth your time to watch the replay on cable channel 26 or 78. If you have high-speed Internet, the hearing is available for viewing at http://www.sfgov.org/site/sfgtv_index.asp?id=31857; click “Government Audits and Oversight Committee,” then click the link for the 02/13/06 hearing.

Additionally, the February edition of Street Sheet (a $1 donation) goes into great detail how the Mayor’s Care Not Cash program has been more detrimental than helpful regarding the homeless people of our city. In a lengthy analysis entitled “The Real State of Homelessness in San Francisco,” the article details how “No Care, No Cash” basically robs the homeless of General Assistance checks by forcing participants to pay for a shelter bed whether or not individuals actually get to sleep in a bed. Furthermore, even if participants are willing to accept a shelter bed, there are either not enough beds for everyone or the shelters are far from the center of The City and nearly impossible to access. In addition, participating homeless people are most often treated with a lack of respect; the people are blamed for being the victims of a throw-away society where people like Gavin Newsom, practicing Republican-style politics, would rather rob from the poor and give tax breaks to the rich.

Last year Sup. Gerardo Sandoval attempted to cut the funding grant to the superwealthy by slashing the budget of the San Francisco Convention & Visitors Bureau. This year, with Sup. Chris Daly chairing the Budget & Finance Committee, the most vulnerable San Franciscans are represented by the stalwart defender of the disenfranchised, and one of Sup. Daly’s actions should be to eliminate the funding for the Convention & Visitors Bureau; this budget item amounts to a corporate giveaway to an agency that should be getting its funding from the billionaire and multibillionaire hotel owners in The City who should be paying for their own advertising, not robbing from the poor to line the pockets of the superwealthy with gold.

Members of the San Francisco Redevelopment Agency claim the Agency only wants to help. We have the opportunity to force SFRA to put up or shut up. Last year, SFRA raked in $117-million just for staff salaries. The commissioners can keep their jobs, but one of the most arrogant employees, Project Manager Mike Grisso, should be terminated, along with the other project managers. Second, the most notorious liar of SFRA should also be terminated, and that’s Executive Director Marcia Rosen. Third, PLANNING should be left to PLANNERS at the PLANNING DEPARTMENT, not PLANNERS at the Redevelopment Agency; terminate all planners at SFRA and let PLANNING be conducted where it should be.

By slashing the funding of SFRA staff salaries by half, we can not only address the shortage of shelter funding but eliminate the budget shortfall of MUNI as well. There are vacant buildings in San Francisco that most likely can be easily converted into homeless shelters, and the cuts to SFRA’s staff salary funding can be diverted into rehabilitation of structurally-sound vacant buildings to house the most vulnerable San Franciscans.

Finally, the Mayor’s Republican approach and his adherence to the Republican culture of corruption cannot and will not be tolerated. I thought he sank to the lowest he could possibly sink when he vetoed Sup. Daly’s protections against Ellis Act evictions, but I was incorrect; Newsom sinks to his lowest with his Republican-style attacks on the most vulnerable San Franciscans, the homeless, with his sick mindset of closing shelters in our city.

Tonight, shed a tear for our most vulnerable fellow human beings. Tomorrow, with renewed vigor, continue the fight for social justice with undying militancy.

Ed note: Guest Editorials reflect the opinion of the author and are not necessarily the opinions of Beyond Chron. We will have an alternative perspective on the shelter vs. housing issue next week.