Grey Gardens – It Was Quite a Party When Everyone was Rich and Gay; I Feel a Thong Coming On; Friends are Forever 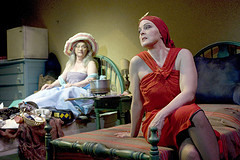 Grey Gardens, the super hit on Broadway is now playing at TheatreWorks in Mountain View. This is a now and then true story of Edith Bouvier Beale and her daughter Edie. Referred to as big Edie and little Edie in the musical play. Big Edie was the Aunt of Jacqueline Kennedy Onassis.

The musical starts out in 1973 (Prologue) and goes back to 1941 in Act 1 and ends up back in 1973 again. Although the story pretty much follows the lives of Big Edie and Little Edie, there are some parts of it that may or may not be true. Little Edie in the play is shown dating Joe Kennedy, who was at the time being groomed by his father to pursue a political career. Not only were they dating — a wedding was planned. But her Mother, big Edie told Joe about the time that Little Edie went swimming in a public pool. She was wearing a skintight swimming suit and when she dived into the pool the seams spilt and she was completely nude. No one offered her a towel, so she got out of the pool and walked past a row of young men, who were of course, delighted. When Joe Kennedy heard this – he calls off the pre-nuptial reception. — Never to see Little Edie again. He told her before leaving that his father told him never to get involved in any scandals. And being nude in those days in public was certainly scandalous.

Years later when little Edie was asked about this she swore that it was true, even though no records were ever found to substantiate this event. But, as is pointed out in the mesmerizing drama – big Edie always messed around with her daughter’s beaus. There was a Getty Boy and many others that Mother Dearest managed to screw and ruin her daughter’s relationships.

They live in a 28-room mansion. The drunken father got a quickie Mexican divorce. He left them the house – but very little to live on. The house began to fall into decaying elegance. They sold off most of their possessions to buy food. As big Edie got older (she has some 30 cats living in the house) – the mother and daughter sometimes resorted to eating cat food.

It made the local papers. The neighbors complained about the Mess around the house in East Hampton, New York. The embarrassment prompted Jackie Kennedy, their most famous relative to finally come through with some help. She put up $32,000 dollars to repair the house, trim the gardens and put in a new heating system. That is the reality – which is not touched on in the musical. But, it seems Jackie didn’t arrange for a monthly stipend for them to live off of.

In the musical we see two eccentric people living in squalor, junk is everywhere and gone are the fancy parties in this great mansion. There is a love hate relationship between the two. Little Edie talks about a producer in New York that wants to put her in a play. Her mother (big Edie) stays in bed most of the time – and little Edie has to take care of her reluctantly. The music is mostly forgettable, but does have some endearing qualities.

Grey Gardens is smartly staged at TheatreWorks. Edith (Beth Glover) sings “The Girl Who Has Everything” with great gusto. She has a terrific singing voice. In fact, I ran into a retired actress at the Musical, who had seen Grey Gardens in New York. She felt that as good as Christine Ebersol was in the role – Glover seemed to really flush out the quirky charm and humor.

Nicholas Galbraith gives a completely naturalistic performance as Joe Kennedy. Little Edie (1941) is bright, vivacious and really brings out the realities of the socialite in those days. She couldn’t have been better.

Dale Soules (Edith Bouvier Beale in 1973) is really terrific. Michael Winther as the Gay Piano playing friend of Big Edie gives a superb performance. The rest of the family refers to him as the eunuch. The rich used to love having a court jester around.

While not the perfect musical – there is much to like about Grey Gardens. It’s an extraordinary story and is hugely entertaining.

ALSO SPECIAL: I FEEL A THONG COMING ON!

Actually, in this HOT evening of entertainment you get A Thong and a Song. Tom Orr is the star of this delectable show that changes the words of well-known show and pop tunes. Are his lyrics provocative? Well yes. For instance there is ‘The Filthy Medley’ and instead of “People who need people” it becomes “People who use peep holes.” Now if you don’t know what that means, then this extremely low-down sophisticated show is certainly not for you.

Not only is Orr sexy (he goes from being a sexy stud to an equally sexy female in a matter of seconds) he sings “I’m strictly an e-mail female” (I Enjoy Being a Girl.)

Loved this. “Now that California has passed the Gay Marriage law. I’m going to wait for the law to accommodate the 3-way!” Orr – throws this out. “Kevin Federline should be bitch slapped!”

There are so many rapid-fire delicious lyrics that you barely have time to catch your breath. With his accompanist, Scrumbly Goldwyn he sings “Thoroughly Bottom Billy” – changed lyrics from “Thoroughly Modern Millie.”

I could go on an on, but I don’t want to give away too much of the show. Believe me – there is nothing yesterday about “Thong”. It’s like nothing you’ve ever seen and heard before. It’s a Mindblower – even if the mind is below the belt. You know, that little guy down there? Orr swings, and apparently both ways. Totally – hilarious! (WARNING NUDITY). Now, that’ll sell more tickets!

AT THE NEW CONSERVATORY CENTER

This is a comedy that reminds of “Boys In The Band” – only Author Tom Kelly has given us more of a lighthearted look at friendship. Is it definitely forever, or maybe? Friendships are necessary and sometimes, just like families, but they can become volatile.

In this play there are three gay male couples that go through life jumping through all the pitfalls of friendship. And those pitfalls would be: Love, infidelity and fidelity. I’m sure that you have had a friend along the way that ended up sleeping with your boyfriend. Don’t you just want to kill him? O.K. maybe you don’t – but it will take a lot of forgiveness to forget about this indiscretion.

There are some really great witty lines in the show. – “I’m gonna bang you like a Salvation Army Tambourine.” Sounds like fun, No? And of course in any friendship there is always the ‘bitchy’ friend. “Preparation ‘H’ works wonders for those eye wrinkles.” The friend Steve replies: “I thought it was just for Assholes.” One couple on the verge of breaking up sez: “We only have a ‘Domestic’– thank God we didn’t get married.”

And of course there is always one of your friends that can’t seem to get enough sex. If it moves, he will go after it. He pleads with his friends that are deriding him for his loose ways. “Is it my fault I just like to spread a little joy?”

Kelly, made some made some deep, cuts in the script just before the opening. The tightening up here and there worked. The audience reaction liked what they were hearing.

The wonderful ensemble of talent is Dann Howard, Christopher M. Nelson, Gerrad Bohl, Brian Patterson, Leo Lawhorn, and Robert McDiarmid. Ben Randle is the director who got the most from his players. Oh, and by the way Dann Howard plays one of the nastiest dinner dates since King Kong!

At The New Conservatory Theatre Center