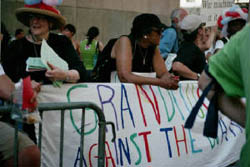 Hundreds of grandmothers converged on downtown Oakland’s Armed Forces Recruitment Center in a Valentine’s Day-themed protest against the war in Iraq Tuesday. As part of the event, which was organized by Grandmother’s Against the War, several dozen “grandmothers”—a group which actually included several men and younger women—attempted to enlist in the military. Organizers said that the purpose of the protest was to criticize both the recruitment of young soldiers and the continued American presence in Iraq.

“We grandmothers have had long, full lives,” the grandmothers read from a statement. “Our young men and women deserve the same. We are prepared to take their place and by that action to help bring an end to this destructive occupation.”

The colorful event was modeled after a similar protest in New York in October and coincided with actions in many cities across the country on Valentine’s Day. Oakland police estimated that about 200 people attended the demonstration, which closed one block of Broadway Avenue for about an hour. Demonstrators lined the sidewalk in front of the recruitment center, holding posters and singing folks songs. In addition, a contingent from Women in Black, a sponsor of the event, stood in silence with two black human figures as is their custom.

The recruitment center locked its doors prior to the protest, according to organizer Marge Lasky. But she added that the protest achieved its purpose though no participants actually enlisted in the military.

“The idea is symbolic: to take the place of the kids,” Lasky said. “We also want to say to kids, ‘Wake up and see what the future holds for you.’”

80-year-old Hal Carlstad also made light of a political headline of the day in his appeal to join the service.

“I’m a much better shot than Dick Cheney,” he joked.