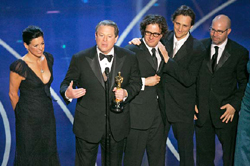 EDITOR’S NOTE: This was featured in yesterday’s Diary Section at Daily Kos, by frequent contributor JekyllnHyde.

In an unprecedented move, the Supreme Court of the United States intervened to revoke the Academy Award won by “An Inconvenient Truth” at the 79th Annual Academy Awards held at the Kodak Theatre at Hollywood & Highland Center, in Los Angeles, California. Responding to a case filed this morning in the United States Court of Appeals for the Ninth Circuit, Exxon v Guggenheim, David, Gore et al, and moving at lightning speed through the legal system all the way up to the highest court of the land, a spokesman issued this stunning statement:

“After reviewing all the overseas ballots cast for this documentary, we have concluded that it is unclear if all of them were legitimate. Therefore, until such time this case is resolved in our legal system, we have decided that the Academy of Motion Pictures, Arts, and Sciences acted in haste. Their judgments, based on the compelling arguments made in Exxon v Guggenheim, David, Gore et al were, to say the least, unconvincing. Oral Arguments will be heard early this afternoon.”

Update #1: A report filed by the country’s most respected news organization, filed by Faux News’ Senior Entertainment Reporter John Ellis, was just posted on the network’s web site and described the chaotic scene outside the US Supreme Court:

A throng of angry crowds lined up outside the Supreme Court of the United States, demanding that justice be served and given the immense importance of this case, emotions ran high on both sides of the case.

As bleary-eyed lawyers from both sides hurried inside to present their case, I encountered the movie’s co-producer, Joe Lieberman. Surrounded by placard-waving protesters in Brooks Brother attire proclaiming him as ‘Sore Loserman,’ here’s what he said,” While I am convinced that we won this award fair and square, it seems like a few overseas ballots were indeed late in arriving. Even so, it is our patriotic duty to have a full and fair recount. That would be in the best traditions of this country’s legal system.”

Update #2 – The network of choice, CNN, interviewed many amongst the angry mob as well as prominent players involved in this landmark case. Here are a few choice quotes:

• “Not only was this award stolen, my client, Exxon, has determined that Global Warming is the worst hoax perpretated by anyone on the patriotic citizens of this country. This will not stand.” – Senior Spokesman for Exxon, Jim Baker.

• “There is no way we could determine the legitimacy of these overseas ballots. I mean, how can we determine the intent of the overseas voter. They are foreigners, after all.” – Associate Justice of the US Supreme Court, Sandra Day ‘O Connor.

• “But Justice O’Connor, the bylaws of the Academy of Motion Pictures, Arts, and Sciences have in them a provision to discern the intent of the voter. It was inserted precisely for a scenario such as the one we’re confronted with today.” – David, Boies, lead lawyer for Guggenheim, David, Gore et al, responding to Justice O’Connor’s persuasive claim.

• “This injustice negates everything that we fought for in the civil rights movement. This is a modern-day lynching.” – Jesse Jackson, noted Civil Rights Leader.

Update #3 – As tension builds and the case proceeds inside the hallowed halls of the court, the Entertainment Industry’s bible, The Hotline, had this to say about Al Gore and calls by his supporters not only to to reclaim his award, his legitimate place in history, and run for President of the Academy of Motion Pictures, Arts, and Sciences

• The Left’s drama played out on the left coast as Hollywood (diCaprio, DeGeneres et al) virtually begged Al Gore to run. Sure they raised money with Barack and Hillary. But doubts remain. Besides, only an Oscar winner can truly be one of them. (Note how Gore didn’t go totally native in his carefully constructed quotes.)

• Their doubts are distinct. But from FL to L.A., it’s clear this incomplete script is poised for a few more plot twists.