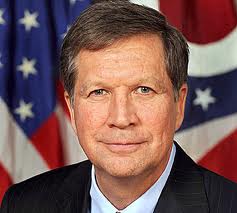 Remember those who urged consumers to heavily borrow for new homes just before the 2008 housing bubble burst? Such confidence was promoted as redefining economic reality, a nonsensical theory with destructive consequences. Now the Republican Party has borrowed this idea that a strong sales pitch changes facts on the ground by claiming “momentum” for Mitt Romney. It’s a “Mitt-mentum” not found in recent swing state polls or in early voting trends, or anywhere outside the GOP spin machine. It’s also another example of what Romney means when he says he wants to bring private-sector business tactics to the White House.

Kasich’s reliance on the Romney campaign’s internal polls over the many independent polls showing Obama still in the lead in Ohio was neither a gaffe nor an accident. In fact, Kasich’s appearance on the national Sunday talk show was aimed at building “Mitt-mentum” in the absence of such a trend in the real Ohio world.

It’s a reality-defying sales pitch that has long been part of American go-go capitalism. Romney and Kasich would describe it as central to our entrepreneurial spirit.

But as millions of Americans victimized by the housing bubble and other investment scams learned starting in 2007, there is a fine line between the entrepreneurial spirit that creates jobs and boosts innovation and reality-ignoring, job-killing hucksterism.

Mitt Romney and today’s Republican Party are relying on the latter. That’s why they are promoting an economic plan they claim cuts taxes while reducing deficits, and an energy plan that ignores climate change. This insistence that what one says makes it true goes to the heart of Romney’s repeated insistence that he, not President Obama, was the one fighting to save the auto industry, his “Let Detroit Go Bankrupt” editorial notwithstanding.

Once you believe your sales pitch can shape and even determine reality, nothing is off limits, including having Governor Kasich and others go on national talk shows to promote “Mitt-mentum” despite no evidence for this in the past two weeks of polling.

Hucksterism is nothing new in U. S. politics. In 1968 we learned how the new era of advertising enabled presidential candidates like Richard Nixon to be sold to voters like packages of cigarettes and other consumer products.

But as we learned in law school contracts class, there is a difference between aggressive “puffing” and lying. Mitt Romney and his GOP backers have not only erased this distinction, but taken the moral high ground by convincing themselves that the very fervency of their convictions makes them true.

Romney’s false insistence during the first debate that he opposed tax cuts for the wealthy was central to his success. President Obama was so taken aback that he was unable to effectively respond.

Americans learned from the housing and investment bubble that even the most confident sales pitch cannot change real estate fundamentals. And an appearance of great confidence was required at businesses like Countrywide, whose sales staff knew they were lying to borrowers but were intent on making the sale.

I think voters saw that Romney’s words were disconnected from reality during the third debate, which is why his poll numbers in Ohio and other swing states have weakened since that time. The same folks who “sold” the Iraq invasion and the housing bubble are all in on the “Mitt-mentum” theme, but this time the voters are not buying.