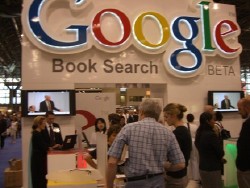 Faced with 400-plus objections from around the world, including a devastating brief by the U.S. Department of Justice, the settlement parties in the Google Books copyright case wisely asked District Court Judge Denny Chin for a second delay in the fairness hearing for consideration of their proposed deal, while they work behind the scenes with the government on revisions. The court is going ahead with a hearing on October 7, but not much of importance is expected to happen there.

This is a major victory for a makeshift coalition of Google’s competitors, information consumers, foreign governments, and authors. The latter were about an inch away from getting screwed in federal court yet again by – are you ready? – the Authors Guild.

It so happens that the oral argument at the Supreme Court in the freelance writers’ rights case, Reed Elsevier v. Muchnick, was also scheduled for October 7. That one is still on, and the elimination of the conflict is good: you don’t want Roger Mayweather’s comeback fight going head-to-head on pay-per-view with UFC 103.

Uh, that was a joke – I’m the Muchnick of Reed Elsevier v Muchnick.

But as I asserted in my September 14 Beyond Chron column, the two cases are linked. Now I would like to explain in more depth why “Google” and “Freelance” are, in practical terms, all but joined at the hip. Though they are at different procedural stages and are driven by different facts, they are also indistinguishable philosophically and in their long-term policy implications. I made these same points last week in a letter to Attorney General Eric Holder, the full text of which can be viewed at http://muchnick.net/lettertodoj.pdf.

Again, part of the story is that the Authors Guild quarterbacked both cases – a sideshow that is rapidly descending into farce. The Guild’s partners in Freelance, the National Writers Union and the American Society of Journalists and Authors, were among the people and entities filing Google objections. And not just any objections. NWU and ASJA argued that Google’s “opt-out” rather than “opt-in” algorithm “turns copyright on its head.” The objectors in Freelance have lodged the exact same criticism for more than four years.

If the Supreme Court sends Reed Elsevier v. Muchnick back to the Second Circuit Court of Appeals for review of the merits – the outcome desired by the respondent-objectors – there may well be a ruling down the road on the legality of opt-out vs. opt-in (or, as we call it, “license by default”).

Once more risking the anger of some of my writer-friends who don’t want to negotiate and are stuck in old paradigms, let me say that I personally believe default or “compulsory” licensing is very much part of the solution to the thorny problems of rights management in new technologies. But such an arrangement has to be tied to comprehensive negotiations among all the stakeholders, concluding with an industry-wide royalty system loosely modeled after the music industry’s ASCAP. As Register of Copyrights Marybeth Peters noted in her recent testimony before the House Judiciary Committee, it is questionable whether such licenses can be compelled by private litigation rather than by Congressional action. In my mind, such action would consist of sensible copyright reform, probably accompanied by antitrust waivers, to keep the information superhighway paved for all while fairly sharing revenues between publishers and authors.

We’ll have a much clearer sense of where all this is headed after the Supreme Court rules on the jurisdiction issue in Reed Elsevier v. Muchnick, either late this year or early next. In the meantime, I encourage everyone to exchange your plane tickets to New York on October 7 and, instead, visit our beautiful nation’s capital.

Irvin Muchnick’s “Chris & Nancy: The True Story of the Benoit Murder-Suicide and Pro Wrestling’s Cocktail of Death” (benoitbook.com) should be landing in bookstores just about the same time the Supreme Court website publishes the transcript of the oral argument in “Reed Elsevier v. Muchnick.”