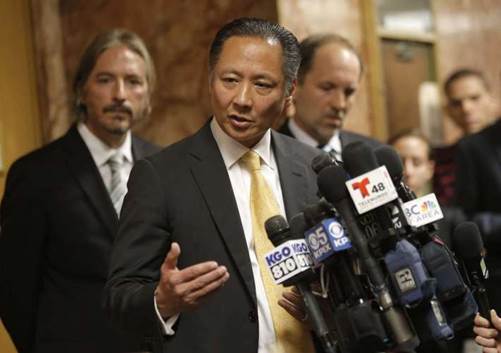 Jeff Adachi was a charismatic, high energy, and visionary social justice leader. He transformed the SF Public Defender’s office into a social movement and was among the nation’s leading criminal defense attorneys. Adachi forever changed the mission and culture of the San Francisco Public Defender’s office and left the entire city—-not just the indigent criminal defendants represented by public defender’s—in a better place.

In 2011 Adachi convinced his longtime friend and colleague Matt Gonzalez to return to the Public Defender’s office. The two ran the office as a team, with Gonzalez acting as the managing partner on the legal side. There has likely never been a public defender’s office with two such talented criminal defense attorneys as Jeff Adachi and Matt Gonzalez at the helm.

As we mourn the loss of Jeff Adachi the reality is that his death does not stop the criminal justice process. And while Gonzalez is temporarily serving as Public Defender, Mayor Breed must pick him as the permanent replacement.

Mayor Breed has done an outstanding job in making appointments. From selecting Ivy Lee to the College Board, Vallie Brown as D5 Supervisor and Faauuga Moliga and Jenny Lam to the School Board, Breed’s appointments have drawn raves.

I have no doubt that Mayor Breed will make a similar popular choice with the selection of Matt Gonzalez as Public Defender. Breed was close with Jeff Adachi, who backed her in last June’s mayoral election. She knows Adachi’s trusting relationship with Gonzalez, and the mayor has supported the way in which the Adachi/Gonzalez team has run the Public Defender’s office.

As much as I trust London Breed’s judgment in making appointments, I saw former Mayor Lee make some head scratching choices. And so not wanting to take anything for granted, I want to highlight how Matt Gonzalez will continue Jeff Adachi’s fighting legacy.

If you know Matt—and he was once President of the Board of Supervisors and became widely known—he is one of the finest public servants San Francisco has ever seen. Gonzalez’ recent winning of an acquittal in the Kate Steinle murder case also showed that, like Adachi, he is among the finest criminal defense attorneys of our time.

The attorneys in the Public Defenders office strongly support Matt. If someone else were appointed to the position, I have little doubt that the office would rally around Gonzalez and he would easily win the November election.

Jeff Adachi was someone we all saw around City Hall all the time.  The last email I sent him was on Dec. 19 after he won the acquittal of a legal aid attorney charged with murder following an altercation outside a bar on Sixth Street. Jeff personally handled the case. I wrote “Jeff, thanks to you a terrible miscarriage of justice was avoided and a progressive attorney got his life back.” Many got their lives back due to Jeff’s transformation of the office from “let’s make a deal with the DA” approach to “we’re taking this case to trial because we can win.”

Mayor Lee used to talk about the “city family.” Jeff Adachi was a key part of this. He will truly be missed.