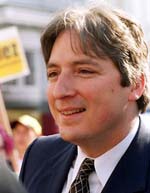 Former Supervisor Matt Gonzalez announced on January 2nd that his law office has settled a class action claim against the Marriott Hotel to enforce the City’s minimum wage ordinance. The settlement concludes sixteen months of litigation against the hotel chain for failing to pay its workers the local minimum wage – and failing to post notices at the work-site regarding the minimum wage, as required by law. Filed in October 2005 on behalf of four workers at the Marriott (and all other employees similarly situated), the complaint alleged that the hotel chain ignored the city’s minimum wage ordinance – and retaliated against the lead plaintiff, Joseph Aubrey, when he complained to management.

The parties agreed to a settlement in the amount of $1.35 million. “We appreciate Marriott’s cooperation in reaching an amicable resolution in this matter,” said Gonzalez. “This settlement affords the plaintiffs appropriate relief and serves as a reminder to employers that all workers in San Francisco must be paid the city’s minimum wage.” As part of the negotiated settlement, funds that are not distributed to employees will be contributed to the City’s Office of Labor Standards and Enforcement for enforcement of the local minimum wage ordinance. In 2003, Gonzalez championed the ballot measure that enacted the local minimum wage. To reflect the increased cost of living, the City increased the minimum wage this week to $9.14/hour.