Gingrich vs. Romney: Who Should Progressives Root For? 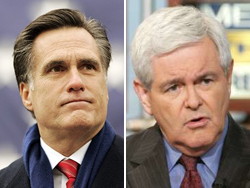 For a partisan Democrat whose only concern is the re-election of President Obama, the choice is clear: Newt Gingrich would make a far weaker Republican opponent than Mitt Romney. But for progressives with an eye on the long haul, it’s less obvious who would be the more desirable GOP nominee in 2012. After winning the White House on a platform of “hope” and “change,” Barack Obama’s message for the Left in 2012 is “fear” – fear that right-wing extremists will undo the little progress that was made. Given the unappealing choices in front of us, the question is how to use the presidential race to shift public debate and hold politicians accountable. Gingrich could end up such a disastrous nominee that he sinks the whole G.O.P. ticket – and if that results in Democrats re-taking Congress, it may be the preferred scenario. But Democrats would interpret such a win as a victory of moderation over right-wing extremism – rather than a mandate for re-shaping our politics, making the 1% pay its fair share. While he’d be harder to beat, Mitt Romney perfectly epitomizes the vulture capitalists who ruined our economy. His defeat would send a much stronger message, emboldening Obama to truly fight for the 99%.

Last week, I wrote that progressives should be thrilled Newt Gingrich won the South Carolina primary. That’s not the same, however, as wishing that he goes on to eclipse Romney and win the GOP nomination. As a partisan Democrat, I was glad because a long, nasty, drawn out fight would bloody the eventual winner – and thus help Obama get re-elected. But as a progressive, I was delighted because Romney’s wealth and tenure at Bain Capital had become a defining issue – and Gingrich’s South Carolina victory vindicated that attack.

As the race moves to Florida and beyond, the question for progressives is (a) would you rather see Gingrich crush Romney and face Obama in November, or (b) would you prefer that Romney eventually fends off Gingrich, and limps into the general election this fall?

An NBC poll last week exposed in stark terms how much weaker Newt Gingrich would be as a Republican nominee, and why no doubt the President’s advisers hope to face off against him. In a general election match-up, Obama would beat Romney by six points (49%-43%, with 8% undecided.)

But Obama would crush Gingrich by eighteen points – or 55%-37%. And in a sign of how delusional the Republican base has become, Gingrich beat Romney 2-1 among primary voters who cite “electability” as their top concern – which suggests that all the warning from GOP elites who fear a bloodbath in November are falling on deaf ears.

Should progressives gloat at how Newt Gingrich is scaring the Republican leadership – who fear a landslide loss? Robert Reich says no. In a blog post at Salon, the former Secretary of Labor wrote: “no responsible Democrat should be pleased at the prospect that Gingrich could get the GOP nomination. The future of America is too important to accept even that small risk.” Reich goes on to say he’d rather take the 49% chance of a President Romney, than a 10% chance of President Gingrich – as the stakes are too high.

Reich is essentially making a “be careful what you wish for” argument. After all, many Democrats laughed at (and Republicans feared) the prospect of Ronald Reagan winning the presidential nomination. He was simply too conservative, and surely could not beat Jimmy Carter. But I would suggest that Reich and others overestimate Gingrich’s odds at winning the White House. Unlike Reagan, whose aw-shucks charisma and optimistic demeanor masked his destructive politics, Newt Gingrich is an unlikable demagogue who will repel independent voters. His odds are not at 10% – it’s probably more like zero.

But one quote really jumped at me that drew me to the same conclusion as Reich, albeit for different reasons. “Gingrich is Goldwater,” said Peter Hart – one of the pollsters who conducted the NBC poll. As the GOP nominee, Newt Gingrich would certainly lose to Obama by a landslide. But the modern conservative movement began with Barry Goldwater’s defeat in 1964, which helped lay the groundwork for Reagan’s election 16 years later. Goldwater’s ideas were outside the mainstream then, but a presidential campaign gave him traction for a long-term strategy.

Would a Gingrich defeat signal to Republicans that they must moderate their right-wing views and work collaboratively with Obama? Not a chance. As we saw after the 2006 and 2008 elections, the Right buckles down after voters elect Democrats – and play the obstructionist game until they win the next round. The whole concept of a TEA Party (i.e., “taxed enough already”) at a time when the Obama stimulus cut taxes for 95% of Americans should prove that right-wing rage is not based on any truth or logic. And a Gingrich defeat will only embolden his true believers to keep fighting the “socialist.”

Which brings us to Mitt Romney. In a normal election cycle, progressives rooting for a former Massachusetts Governor to win the GOP nomination would seem odd. But the Occupy Movement – which brought wealth inequality into the public eye – changed that dynamic, and in many ways Romney is the perfect “bogeyman” for a general election.

It’s not just that Romney casually makes $10,000 bets with his opponent, or that his tax returns (with a 13% tax rate and Swiss bank accounts) are a poster-child of everything wrong with how the rich evade taxes, or that he talks about how he loves firing people, or his appalling tenure of “vulture capitalism” at Bain Capital where he destroyed middle-class jobs. As Associated Press reported, Romney would be one of the richest Presidents in U.S. History. How rich is he? “Add up the wealth of the last eight presidents, from Richard Nixon to Barack Obama. Then double that number.” If Romney wins the nomination, expect more stories like this in the media.

But wouldn’t Romney be a more formidable candidate against Obama – because unlike Gingrich, his demeanor won’t turn off independent voters in droves? Independents don’t like billionaires who skimp on their taxes and destroy jobs. And when more details emerge about Romney’s personal life, the average swing voters will find him almost as weird as Newt Gingrich. I’m not talking about the time he drove 13 hours to Canada with the family dog strapped to the roof. As has been reported, Romney posthumously converted his father-in-law (who was a militant atheist, by the way) into the Mormon Church. Expect more strange stories like that.

As progressives who passionately supported Obama in 2008, the last four years have been a harsh disappointment. The President caved on a public option for health care, capitulated on the Bush tax cuts for the wealthy, deported more undocumented immigrants than even George W. Bush and so on. Obama’s only message for the Left in 2012 is that the Republican alternative is even worse, and so we better get behind him.

As others have pointed out, Obama’s State of the Union Address last week was a remarkable breath of fresh air – and there’s no question we can credit the Occupy Movement for convincing the White House that taking on entrenched billionaires is good politics.

But as we move on to the general election, it would be better for the Left to have Obama run against Mitt Romney (where he would keep attacking the 1%) than Newt Gingrich (who the Obama campaign will ridicule with the latest loony idea coming out of his head.) If you liked Obama’s State of the Union Address, and hope that it translates into real political action where he actually puts up a fight, you should root for Mitt Romney.

In 2002, California Governor Gray Davis was in trouble – so he decided to influence the Republican primary, and pick his weakest opponent in the general election. The gambit worked, as right-wing conservative Bill Simon defeated moderate, pro-choice Mayor Richard Riordan. But on primary night, I had a sinking feeling that it wasn’t good news.

With Bill Simon as the nominee, Davis would not owe progressives anything after the election – all he had to do was earn our votes by scaring us about his extreme opponent. With Riordan, at least it would have forced Davis to give us a reason to support him. Davis won the general election (while many of my friends voted for the Green Party candidate.) Less than a year later, he was recalled from office.

From the perspective of a partisan Democrat, I understand that Newt Gingrich would be easier to beat. But from the lens of a progressive disillusioned with Obama, one who will still vote for him because we have no choice, but one who hopes for a brighter long-term future where we can hold politicians of both parties accountable, I’m hoping Romney gets the GOP nomination. Beating him in November would be a mandate against the 1%.