Gavin Newsom, Cory Booker and the Struggle for Urban America 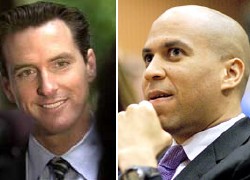 Although San Francisco and Newark, New Jersey appear to have little in common, both have young, high profile mayors trying to revive long distressed urban communities. In San Francisco, Gavin Newsom is trying to end the city’s longstanding use of the Uptown Tenderloin as a “containment zone,” ( an area where drug dealing is confined so that it does not spread to other neighborhoods), and today is launching a new transit strategy to enhance the long troubled Mid-Market area. Newark Mayor Cory Booker faces much greater challenges, but as depicted in the recently concluded five-part documentary, Brick City, Booker refuses fall prey to the skeptics who say his city’s problems are intractable. He has greatly reduced homicides in Newark and renewed hopes for the city’s revival. But despite the efforts of these and other urban mayors, the problems of the inner -city are far removed from the national political debate. Unlike the 1960’s, mayors crusading to improve urban neighborhoods are on their own, unable to secure the federal money that expedites success.

On November 12, 1965, Time magazine had a cover story about crusading New York City Mayor John Lindsay, who walked through ghettoes with his jacket off and sleeves rolled up, embodying the nation’s “can do” spirit in tackling urban poverty. But this was before the War on Poverty began to retrench in 1966, which led Time to place Lindsay on its cover nearly three years later under the heading “New York: The Breakdown of a City.” And after President Ronald Reagan slashed funding for urban America to the bone in his 1981 budget, money for Community Development Block Grants, affordable housing, inner-city job training and similar programs never returned to pre-1980 funding levels.

This historic backdrop is why I found the Sundance Channel’s recent five-part Brick City documentary on Mayor Booker’s attempt to transform Newark so intriguing. It tries to fit Booker into Lindsay’s 1965 Time magazine image despite Booker being African-American rather than upper-crust WASP, Newark not being New York City, and the federal government’s retrenchment from investment in inner-city America.

I’ll say this for Booker: no mayor has ever had two enormously popular and even fawning documentaries made about them after having served less than a full term in office. While the film, Street Fight, of his losing race against incumbent Sharpe James in 2002 preceded his mayoralty, it nonetheless revealed Booker to be the type of talented and passionate advocate for change that Newark had long needed.

Booker is shown to be an incredibly hands-on mayor (so much for the resemblance to Newsom) who has brought in the best and the brightest to undertake the Herculean task of returning Newark to a safe city for the middle and working class. But what’s striking about Brick City, which focuses on Booker’s crime reduction efforts, is the ongoing opposition to his reform efforts within much of the city’s black community.

His opponents argue that for all of his talk, and bringing in of outside experts, little on the ground has changed. And while the filmmakers go out of their way to show Booker doing everything possible to improve Newark, viewers of the series will find that this opposition critique is truer than the filmmakers recognize.

This does not detract from viewers admiration for Booker. He deserves enormous credit for directing his extraordinary talents toward improving Newark, instead of pursuing money, power, and a career that would not have subjected him to public attacks against his integrity, and even his racial identity.

But the fact remains that our federal government has not given Cory Booker the resources to succeed. And this helps explain why the African-American community in Newark is split over his record (as made clear in Brick City), as they see a city without jobs, affordable housing, quality education, and with crime down but gang violence still a major problem.

Gavin Newsom does not face anything near the challenges of Booker, but he has decided to address two of San Francisco’s longstanding pockets of economic stagnation: the Uptown Tenderloin and Mid-Market. On the latter, today
the Mayor launches the “Better Market Street Transportation Pilot Project” to improve public transit and pedestrian activity on Market between 10th and 6th Streets by limiting cars in the area.

Although there has been talk since the Willie Brown Administration of limiting traffic on Market Street, the idea went nowhere. But Newsom’s move has engendered little fuss. People might not know about the plan, or else recognize that city efforts to improve Mid-Market are long overdue.

Or it could be that Newsom’s press office has issued so many releases over the years touting the “new,” the “path breaking,” and the “innovative” that when the mayor actually does do something that fits this category — like the Market Street transit plan — few are paying attention.

Newsom’s effort to end the Uptown Tenderloin’s longstanding role as a “containment zone” for public drug dealing is much more audacious.

While mayors have long provided the Uptown Tenderloin with housing and social service funds, the prevailing attitude was shown by Mayor Willie Brown when he ignored community opposition to replacing the San Francisco Fire Department headquarters on Golden Gate Avenue — whose occupants injected money into local restaurants and businesses — with a family homeless shelter. Brown felt that this was the only community that he could force to accept such a facility without a major revolt of voters and campaign contributors, just as his police department continued the policy of seeking to “contain” public drug dealing to the Uptown Tenderloin’s borders.

Nobody anticipated that Mayor Newsom would seek to end the Uptown Tenderloin’s longstanding function as a containment zone. His action brings no campaign contributions, few votes, potentially shifts drug dealing to neighborhoods offering both money and votes, and is likely to do little to help him in his governor’s race.

The chief beneficiaries of Newsom’s strategy are the overwhelming low-income residents of the area, far too many of whom feel trapped in the subsidized housing units out of fear of going on to the streets at night.

The Uptown Tenderloin could be seen as a tiny microcosm of Newark, with problems many deem insolvable. In the 1960’s, these efforts by Newsom and Booker to improve inner city neighborhoods would be national stories; today, with attention focused on health care reform, Afghanistan, California’s budget crisis and other problems, Newsom’s efforts do not even rate much interest in San Francisco.

While President Obama’s first budget is dramatically better than those of the Bush years, and his Administration includes many who support massive new urban initiatives, money is so tight that providing the necessary resources is years away.
The question is whether this lack of federal funds will create an urban backlash that ultimately endangers the politicians eager to address inner city problems.

It is not just African-American voters in Newark who are displeased at the pace of improvements under Mayor Booker; last spring saw progressive Los Angeles Mayor Antonio Villaraigosa embarrassed by a narrow re-election victory against a virtually unknown opponent.

In the 1991 Mayor’s race, incumbent Mayor Art Agnos was defeated by conservative former police chief Frank Jordan, as many former Agnos supporters rejected him for not fulfilling an ambitious agenda conceived before the national and state economies tanked in the late 1980’s. If this can happen in San Francisco it can happen to progressives anywhere, a fact that should not be lost on the Obama Administration as it prepares his next budget and/or stimulus plan.