Full Board Gets its First Look at Transbay 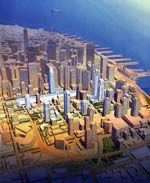 A redevelopment plan that could create a whole new mixed-use neighborhood south of the Financial District inched closer to reality yesterday as the Redevelopment Agency (RA) formally presented the Transbay Redevelopment Project to the Board of Supervisors for approval. The board put their decision off until next week’s meeting, citing the absence of Supervisors Daly and Sandoval. Although Mark Grisso, the RA’s South of Market Project Manager, cautioned that new development is meant to finance the Transbay Terminal, which is being built under state auspices by the Transbay Joint Powers Authority, he said “This is an opportunity to create a whole new neighborhood.” Public comment was heard in addition to the presentation.


The center of the project area is the decrepit 65 year-old trans-bay bus terminal, which sits atop a “blighted” area; a patchwork of state owned land, irregularly shaped lots, derelict buildings, surface parking lots and remnants of the Embarcadero freeway. Caltrans plans to demolish the current terminal and build a new terminal for a variety of transit services, including an extended Caltrain line. In the process, the state will transfer 10 acres of land to the RA at no cost, on the condition that much of the revenue go to fund the terminal. The RDA plan would create 750,000 sq. ft. of office space, 600,000 sq. ft. of retail space and 450,000 sq. ft. of housing in a “smart planning” setting, with widely spaced towers, underground parking and pedestrian friendly sidewalks. A smaller zone will be administered by the Planning Commission.

According to state laws governing the plan, 25% of units must be affordable to 60% or less of Area Median Income (AMI) and 10% must be affordable to 120% or less of AMI, making a total of 1200, or 35%, of the project’s 3400 units affordable. About 400 of those units will be included in market rate developments and the remaining 800 will be in stand-alone, all-affordable buildings in the project area and will be slated for “very-low income” tenants. The RA project will be funded by taxes on the transfered land, 20% of which will go to fund the affordable housing initiatives.

A few dozen people spoke to the board, including members of the Transbay Citizens Advisory Committee. Longtime CAC member Jim Haas said “The plan we have before us has been vetted thoroughly” and complimented the RA’s cooperation with the CAC. He also warned that the benefits for the city depend entirely on the success of the Joint-Powers sponsored terminal project saying “you cannot rely on the Joint-Powers, this is a San Francisco project.” Haas also suggested that the city should take steps to ensure that the Transbay Terminal be built, even if it meant not subsidizing any affordable housing. Several speakers presented specific requests for exemptions.

The supervisors will debate the plan next week and must either approve it outright or send it back to the Redevelopment Commission with recommendations. Though the supervisors did make any proposals at this meeting, the debate in the Land Use Committee last week suggests that lowering the for-sale affordability requirements to 100% AMI, protecting the city’s revenue stream from state encroachment and increasing board control in later stages of the development process will be on the agenda.