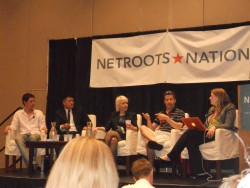 At last year’s Netroots Nation Convention in Las Vegas, Democrats still controlled both houses of Congress – and politicians reminded us what Franklin Roosevelt told activists at the start of the New Deal: “I agree with you. Now make me do it.” No one dared repeat that line again this year in Minneapolis, because now we have all learned the truth – Democrats don’t really want to “do it,” and the President actually resents pressure from the left. White House Communications Director Dan Pfeiffer’s appearance was an unmitigated disaster – and as the Huffington Post described it, this was the year the netroots “broke up” with Obama. The lesson from this Convention was not “make me do it,” but rather “do it yourself” (or as one speaker put it, “yes we can” not “yes he can.”) The netroots will push for change on their own without leaders they hope will do the right thing. Recalling six Wisconsin state senators to wrest control from Republicans is a start, and there were many DREAM Act heroes who came out of the shadows for a better future.

A Thursday afternoon called “What to Do When the President is Not That Into You” set the tone for the whole Conference, where liberal bloggers had few kind words for what Obama has done. “Our problem is we expected what he promised to be,” said John Aravosis of AMERICAblog. “It’s not just been about what we’re getting him to accomplish, but even getting him to try. We were expecting a fierce advocate.” The truth is even more depressing when you consider what Obama has done on his own, without having the excuse of Republican obstruction – a wage freeze for federal employees, lying for months the White House had “no choice” but to defend DOMA, and more deportations of undocumented immigrants than under George Bush.

“The progress that has been made,” said Aravosis, “is when we have been a royal pain in the ass. We don’t get as much as what we want because we don’t stand up to him.” Jane Hamsher of Firedoglake echoed the sentiment by saying: “looking at what we have achieved, you really need to credit people like Lt. Dan Choi [who chained himself to the White House to repeal Don’t Ask Don’t Tell.]”

Rather than appearing himself like he did at the 2007 Convention, or sending senior aide Valerie Jarrett like in 2009, President Obama sent White House Communications Director Dan Pfeiffer to Netroots Nation this year, and the results were predictable. After all, the job of a PR flak is not to “make news” – but to deflect questions and repeat their boss’ talking points.

Daily Kos blogger Kaili Jo Gray did an admirable job moderating the discussion, but the only notable moment was when he suggested Obama’s 1996 survey response in favor of gay marriage was a fake. And when it came time to talk about Obama’s capitulation on the Bush tax cuts, he re-affirmed all the worst right-wing frames. Pfeiffer’s overall message to the netroots was that the President “shares your frustration” – which, of course, sounded very Clintonian.

So where does that put us? Everyone from Howard Dean to Van Jones had the same message – that this political movement cannot be reliant on a charismatic leader, but instead on a charismatic network of activists. On Friday, Jones described how he has studied the Tea Party’s recent success – and that they are not tied to any particular individual. And how do we build that network?? By setting up an infrastructure.

Probably the most optimistic message I got this weekend was from Daily Kos founder Markos Moulitsas. “This is a long-term, nascent movement,” he explained. “We were lucky because George W. Bush existed, and we shouldn’t have taken back Congress so quickly. We don’t have the infrastructure to hold our leaders accountable. Look at how long it took on the right from Barry Goldwater in 1964 to Reagan’s victory in 1980.”

So in the short term? The netroots is focusing on local, winnable battles that will help build progressive power. Right now, Democracy for America and the Progressive Change Campaign Committee are pouring resources into Wisconsin – where they have targted six Republican state senators for a recall. Anyone can get involved – even out here in California, by going to the site and making phone calls. On Sunday after the Netroots Convention was over, a bus took a group of bloggers from Minneapolis to Wisconsin to go walk precincts (sadly, I had a plane to catch and couldn’t join them.) If we can flip control of the Wisconsin State Senate, it will help build momentum at recalling Governor Scott Walker early next year.

“Some day, a book will be written about this campaign,” said Adam Green of the PCCC. “The level of coordination [between activists] has been unprecedented.”