Fraud of the Century by Roy Morris Jr. 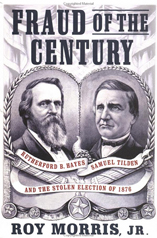 When the outcome of the 2000 Presidential election remained uncertain weeks after the votes were cast, the media described this scenario as unprecendented in American history. The subsequent machinations that put George W. Bush in the White House were typically described as unique, and this myth was reaffirmed by the Supreme Court’s holding that its ruling in Bush v. Gore created no precedent for future cases.

One reason that the truth about the stolen election of 2000 was quickly swept under the rug is that it undermines our most precious ideals. One can only wish that Roy Morris, Jr had written Fraud of the Century well before the 2000 election, as it may have influenced the media’s attempt to portray the recent Florida fiasco as an isolated event.

Now available in paperback, Morris’s book was widely reviewed when first released but failed to gain access to the media shows that discuss current political events. True, the book technically deals with history, but the similarities between Florida in 2000 and 1876 gives it great contemporary interest. Considering the media’s urging of Americans to put the stolen election of 2000 behind them, Morris’ book brings up realities about our nation that many prefer to keep hidden.

Morris begins the book with each of the two Presidential candidates, Democrat Samuel Tilden and Republican Rutherford B. Hayes, going to bed on election night assuming Tilden had easily prevailed. He then shows how a handful of Hayes partisans came up with a strategy to challenge votes cast in three key states.

Many readers will appreciate Morris’ steady focus on the election chicanery, and his limiting discussion of the broader political context of the race. He does describe how the preceding eight years of corruption under the Republican President Grant created voter discontent with the incumbent party, and how white voters in the South were already becoming the solid Democrats that they would remain for more than eighty years.

But Morris does not fully explain that while the Republicans are seen as the good guys due to their support for fair treatment of former slaves, the Party was also aligned with corporate interests whose economic policies hurt workers and farmers. In fact, the two major parties were held far more similar policy views in 1876 than they do today.

Morris pulls no punches in reciting the tawdry stealing of the Presidency. The Republican strategy was not much different than that used in 2000. In Louisiana, where Tilden clearly won handily, over 13,000 Tilden votes were voided by the Republican-controlled Commission charged with assessing voter fraud. The reason? The Commission found that Tilden’s victory margin was so large that Hayes voters had to have been intimidated from voting.Tilden votes were voided by election officers in Florida and South Carolina on similar grounds.

As with the 2000 race, the vote stealing at the state level ultimately came before the US Supreme Court. Morris reveals, as J. Anthony Lukas does in more detail in The Big Trouble, that our highest court has never been a bastion of integrity and legal scholarship.
If Americans thought Scalia and Renquist had conflicts of interest given their kids employment by GOP forces, this is the tip of the barrel compared to the Court’s ruling in the 18767 election.

Not to give away all the juicy details, but Morris demonstrates that a Supreme Court Judge’s draft opinion in favor of Tilden was subsequently rewritten to favor Hayes after the Justice received a middle of the night visit from Republican operatives. Do not expect this sordid fact to soon enter America’s history books.

Morris portrays Samuel Tilden much like Al Gore. Although urged by supporters to threaten a renewed civil war over the prospect that the presidency would be stolen from him, Tilden insisted on taking the high ground. Tilden knew the procedures set up to determine the result were corrupt, but, like Gore, allowed these illegitimate processes to be played out until his defeat was certified. Of course, as Morris points out, there was a real risk of re-igniting a civil war in 1876—Gore had no such excuse for his passivity.

In Morris’s final analysis, the standard history book line that a deal gave Hayes the Presidency in exchange for the removal of federal troops from the South and the end of Reconstruction is entirely false. He shows that no deal was necessary, as even much of the North was weary of Reconstruction. In fact, the saddest part of the book is not the theft of the election, but the realization that once the South rejoined the Union, subjugation of former slaves by the white majority could not be stopped by the democratic process.

Morris has not only written a page-turner, but he has revived a critical part of American history that many prefer to remain under the rug.