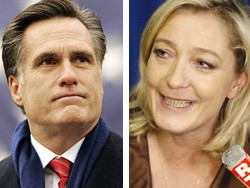 According to the U.S. media, the real story in the first round of the French election was the surprising strength of the “far-right” and “extremist” candidate Marine Le Pen. Le Pen promoted anti-immigration and law-and-order themes, and questioned France’s involvement in the European Union. Yet when Republican Presidential nominee Mitt Romney promoted the “self-deportation” of millions of undocumented immigrants, and said that Arizona’s immigration measure should be a national “model,” none of these media outlets described Romney in such negative terms. Marine Le Pen’s economic policies are far to the left of Romney and the Republican Party, and she supports abortion rights. Yet the U.S. media refuses to acknowledge that Romney and the Republican Party are “far-right” and “extreme” by both international standards and prior U.S. history.

Two themes have dominated U.S. media coverage of the French presidential race. The first is that voters chose Socialist Francois Hollande not because of his opposition to austerity and support for more progressive policies, but rather because they were in an anti-incumbent mood and wanted change. The second was that Marine Le Pen’s success shows the power of “far-right” and “extremist” elements.

The U.S. media never acknowledges that “far-right” and “extremist” elements completely control the Republican Party. To the contrary, such terms are limited to describing foreign political parties and domestic politically fringe groups like the Ku Klux Klan. Even die-hard Southern segrationists occupying the U.S. Senate and state Governor’s offices for decades were never described as “extreme.” The media does not used this term to describe anti-immigrant Republican policies little different from those promoted by Le Pen.

There are eerie parallels between Le Pen’s success and the current Republican Party. Consider France’s leading newspaper Le Monde’s editorial after the election on the significance of Le Pen’s accomplishment: “Her personality, style, and proposals have allowed the daughter of the ex-National Front leader to achieve the goal of un-demonizing the party, which she has been working toward for several years.”

“Undemonizing” is another way of saying that Le Pen has discarded the overt racism and anti-Semitism of her father and created a right-wing movement that is at least superficially more mainstream. She has followed a path set forth by Lee Atwater and picked up by Karl Rove in which extreme and right wing policies are “undemonized” and promoted as mainstream values.

And then reframed in such terms by a media world afraid that telling the truth would demonstrate “bias.”

Marine Le Pen is actually too far left for our Republican Party. She criticizes corporate power and supports abortion rights.

If a foreign political party candidate backed plans for invasive procedures against women as a condition of receiving constitutionally protected medical procedures, the American media would this as “extreme.” But when the Republican Party promotes such policies, our media calls it a “moral” issue where good people can disagree.

The U.S. media retains a remarkable ability to identify problems abroad that it ignores at home. Consider its focus on people waiting in lines in Venezuela.

On January 19, 2011, the New York Times ran a long story whose theme was “Revolutions may come and go in Venezuela, but one thing endures: long lines.” On April 20, 2012 the Times renewed this message in a piece “With Venezuelan Food Shortages, Some Blame Price Controls.”

If the Times wants to show lines, it could send photographers out to most major cities where people spend hours in line for food or shelter. And if it wants to show how many people live in a nation far wealthier than Venezuela, it will have no problem finding people in New York City picking through trashcans for food and sleeping on city sidewalks.

The U.S. media has no hesitation identifying far-right extremism and poverty abroad. Exposing the truth about our own nation’s policies is a far different matter.