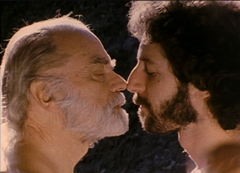 Gabe (Bill Heck) and Ernesto (Marcus DeAnda) are two blue collar gay men living in emotional limbos in rural Texas. Gabe works in construction, and maintains ties with ex-wife Shannon (Amy Seimetz) and their daughter. Despite the end of his marriage-ending relationship with a male lover, he still pines for his ex. While Shannon accepts Gabe’s help in raising their daughter, his infidelity stands as a permanent divider between them.

Ernesto works as a forklift driver. Aside from cat Shana, his other housemate is a younger ex-lover emotionally stuck in avoiding college. The person Ernesto remains closest to is a comatose ex-lover. What events will spark Gabe’s and Ernesto’s emotional healing?

The metaphorical title of Tan’s film captures both the story’s dramatic arc and its rural Texas setting. A pit stop is a place where one’s car gets repaired and refueled before continuing with a race or a journey. Images of often long empty stretches of the Texas countryside remind the viewer that a car is the transportation option that allows Texas residents to bridge the distances between human habitations.
Both Gabe and Ernesto have been damaged by the painful endings of their past relationships. Gabe hopes to have another chance with his ex-lover. Ernesto’s visits to his injured ex are a mixture of true concern and desire for some semblance of human companionship.

What makes Tan’s film work so well is how its accretion of small details helps the viewer understand the lives of these two sometimes taciturn gay men. Shannon’s hostility towards Gabe when he asks about her upcoming date serves as a boundary regarding her ex-husband’s knowledge of her private life. Or it could be a passive-aggressive reminder of her still smoldering anger regarding his infidelity. Ernesto’s reading relationship articles to his comatose ex-lover feels at times like a fumbling attempt to understand what went wrong between them.

Social homophobia and the main characters’ eventual meeting do play parts in “Pit Stop.” Refreshingly, neither familiar story trope becomes the film’s dramatic focus. The parental disowning of Ernesto’s ex-lover is mentioned in passing. Pet ownership and similar economic strata do give the viewer cues that the two men complement each other. Yet the medium for their eventual meeting is not contrived dramatic complications, but a briefly mentioned Internet communication.
Tan’s real aim is first moving Gabe and Ernesto out of their respective emotional holes. The sweetness of their eventual date reaffirms that both men are finally able to love again. And who could argue with that?

Frameline 37’s must-must-must-see film is the documentary “Big Joy: The Adventures of James Broughton.” Directors Stephen Silha, Eric Slade, and Dawn Logsdon delightfully chronicle the Bay Area avant-garde poet/filmmaker’s life through readings from Broughton’s journals (e.g. an angel’s childhood visitation) and interviews with such friends as Anna Halprin. Darker aspects of Broughton’s life, such as a tortuous childhood, don’t get whitewashed. But Broughton ultimately comes across as a joy-filled life force, a point confirmed by generous excerpts from his films.

LeeSong Hee-il’s drama “White Night” follows a man living through a proverbial long dark night of the soul on the convoluted streets of Seoul. Despite maintaining a face whose general impassivity can frustrate the viewer at times, the lead character eventually earns some semblance of viewer interest.

Airline steward Wongju Kang has returned to South Korea for the first time in two years courtesy of his airline’s stopover. Despite having a lover in Germany, he arranges a one-night stand with the motorcycle riding Taejun Lee (aka Pedometer). What Lee thinks will be a simple sexual hookup turns complicated and even frustrating courtesy of the expatriate’s behavior, a mix of desire and rejection. While the steward’s actions appear baffling, it slowly becomes clear that Kang has an agenda in mind, one tied to a past that resulted in his severing his emotional ties to South Korea.

Though the sidewalks of Seoul are generally snow free throughout most of the film, “White Night” proves an appropriate title. The snowbanks alluded to are not physical but metaphorical. Wongju has buried his feelings regarding the homophobia that drove him out of South Korea. The events of this long night could easily be described as his effort to make peace with his past.

That doesn’t mean watching LeeSong’s film is necessarily a satisfying experience. The problem is not that Wongju keeps his motivations hidden behind a generally attractive yet expressionless face, much to Taejun’s frustration. Certain types of Asian art films demand patience from the viewer as its attention to apparently innocuous details are the key to understanding its deeper meanings. LeeSong’s problem is that “White Night”’s details never go beyond surface shallowness. When Wongju leads Taejun on a long walk to a distant bathroom, there’s no sense that the walk appears to be anything more than an example of the steward’s jerky behavior.

That shallowness undercuts the plausibility of the bonding that develops between the two men. Taejun’s net surfing does admittedly lead to his understanding of one of Wongju’s motivations. But that knowledge doesn’t make the younger man’s behavior any less an exercise in emotional masochism. Despite its relatively short running time, “White Night” feels far longer and less interesting than it should be.