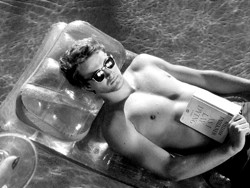 Matthew Mishory’s impressionistic biopic “Joshua Tree, 1951: A Portrait Of James Dean” offers a wonderfully sensual portrait of this cinematic icon before he achieved fame. Aspiring actor Dean (James Preston) has come to the titular national park for a short vacation with his roommate/lover (Dan Glenn), and their “chaperone” Violet (Dalilah Rain). The latter is an “aspiring starlet” whose actual profession seems to be Hollywood power player Roger’s gofer. Her blocking Dean’s relationship with his roommate fits in with Roger’s efforts to groom Dean for stardom. Then again, is the relationship between Dean and his lover doomed anyway by the former’s hunger for Hollywood success?

Mishory takes an effective non-chronological and non-standard visual approach to presenting his tale. As the film travels back and forth among the Joshua Tree trip, Dean’s lotus eating at Roger’s mansion, and student days with the roommate, the viewer feels the desert heat is melting away the characters’ self-deceptions and rationalizations to reach their emotional truths.

Most of the film’s story is told in black and white. Occasional bursts of color turn the Joshua Tree trip into the roommate’s precious last chance for capturing personal moments with Dean.

With actors, where does the onscreen persona end and the actual person begin? Mishory’s depiction of a cinema icon halfway out of his emotional chrysalis sets up that determination. Preston’s interpretation of Dean answers that question. As Dean’s unique approach to performing an acting exercise shows, his thuggish appearance is more than a pose. Yet assuming that appearance summarized Dean’s personality ignores observant eyes that paid close attention to his drama teacher’s lessons or a mind whose poolside reading was deeper than the average New York Times Best-seller.

The roommate’s cultured influence obviously connected with Dean. But his love for Dean mistakenly assumed that emotional contact entitled him to access the other levels of Dean’s personality. The intensity with which Dean intended to live his life and career had no room for the roommate’s cultured moderation. Mishory effectively shows the roommate’s loss would be cinematic eternity’s gain.

Joshua Sanchez’ “Four” adapts Christopher Shinn’s play about four lost individuals out on a suburban Fourth of July holiday. The individuals are a teenage boy uncomfortable with his gay desire, a closeted married man, a teenage girl who’s liberating herself from caring for her mother, and the girl’s gadabout white beau. While other people celebrate the holiday, these four people face personal bitter truths.

Yet “Four” eventually falls flat. Minimalist dialogue and storytelling should intrigue the viewer to imagine the details left sketchy by the film. But Sanchez’ use of these devices turns this long dark night for four souls into an agonizing endurance test.

The film’s more comic moments hype the absurdities of the Pruitt children’s situation. Bethany’s home high school “graduation ceremony” turns a supposed life milestone into an embarrassing charade. The beloved Mr. Pruitt turns out to be just as emotionally untidy as his wife.

The film’s finale offers a nice moment of visual storytelling. Yet that moment fails to redeem the emotional flabbiness of “Sassy Pants” midsection.

Despite the different musical genres involved, Andrea Meyerson’s documentary “I Stand Corrected” could be double billed with the Chely Wright documentary “Wish Me Away.” Meyerson presents transphobia in the jazz world through the story of her subject, incredibly talented transgender jazz bassist Jennifer Leitham. Pleasures in being a unique left-handed upright bass virtuoso get tempered by Leitham’s realization that she also needed to resolve her sexual dysphoric schism.

Seeing Leitham’s frenetic hand plucking of the bass will surprise jazz fans accustomed to the bass’ usual musical subordination. But the concert footage clips will push appreciation of Leitham’s performance out of the realm of novelty. Also surprising is the support given to Leitham by such jazz luminaries as Doc Severinsen. By film’s end, though, another similarity between Leitham and Wright will be revealed.

“Love and Anger” and “Empire of Evil” use familiar storytelling genres as vehicles for gleefully offending viewers.

Brian Benson’s “Love and Anger” hilariously gooses the traditional fairy tale. The familiar quest to defeat an evil witch proves less entertaining than the sights of a fetus bolo, a rain of blue giant crap, and child abuse amusing in its awfulness. Benson makes “Wonder Showzen” look like a Saturday morning cartoon.

“Empire of Evil” is late underground filmmaker George Kuchar’s final film. Made with his San Francisco Art Institute filmmaking class, it gleefully inverts the film noir staple of the reporter trying to stamp out corruption in her town. Plot, polished acting, and classy effects matter less than Kuchar’s cinematic flamenco dance on the genre’s moral underpinnings. Music cues will put viewers in the proper Pavlovian state of mind. Kuchar exits with a final yank on Hollywood’s chain.