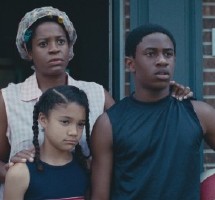 Yun Suh’s documentary “City Of Borders” offers a far different view of LGBT life in Israel than that offered by the advertisements. The titular city happens to be modern-day Jerusalem, where such barriers as Jews vs. Muslims and orthodox vs. secular divide its inhabitants. Ironically, homophobia in its various shades acts as the unifying force for the more conservative Israelis and Palestinians.

Jerusalem’s only LGBT bar, Shushan, provides a countervailing weight. Its owner, Sa’ar Netanel, wants to provide a safe space for LGBTs to come together and also be visible. The sight of Palestinian gays making a life-threatening night-time crossing through separation wall holes radically demonstrates Shushan’s necessity.

The heartbreaking power of Suh’s naturalistic documentary comes from seeing how each subject individually responds to the often contradictory social pressures exerted on them. Samira and Ravit try to balance their deep love for each other with the ever-present conflict between the Occupation and the Intifada. Sa’ar is Jerusalem’s LGBT community’s public face. But Jerusalem’s political volatility might have stumped Harvey Milk. One hopes all five of these individuals stay in the Jerusalem area and fight for LGBT rights to the bitter end. But the reality of having personal threats frequently phoned to one’s elderly mother or the lack of support or understanding from one’s immediate family makes that idealistic option seem foolish.

“City Of Borders”’ frequent shots of Jerusalem’s ancient and massive buildings symbolize the enormity of the forces arrayed against this fragile LGBT community. These shots also disturb because these structures, despite their age, still look very sound. The Shushan community is still a
vulnerable infant by comparison.

Suh’s Berlin Film Festival award-winner ultimately demonstrates the limits of personal love as a force for social change. Hatred based on massive religiously-fixated certainty proves stronger than individual love. Several subjects end up yielding in various ways to Jerusalem’s homophobes. Yet Suh refuses to succumb to despair, ending the film on a very appropriate image.

Writer/director Tina Mabry’s “Mississippi Damned” is a semi-autobiographical drama of the desire for escape and the social/emotional barriers to same. As one might guess from the title, this ensemble drama of family dysfunction goes into emotionally disturbing territory and can break the viewer’s heart on occasion.

The characters in the film are trapped in their town by both economic circumstances and personal self-deceptions. Frequent shots of the town show build a sense of unrelieved decay and hopelessness. The unemployed male characters frequently talk of their determination to look for work. But one realizes it’s less a goal than an act of face saving. More emotional energy is spent drinking or gambling.

Mabry makes clear that what stands in her three central teens’ way of leaving the town is their failure to confront their emotional unwillingness to depart this emotionally toxic area. Bull dyke Leigh can’t bring herself to make alternative plans when her dreams of a future with her girlfriend seriously fall through. Kari sacrifices her college dreams allegedly for the sake of helping her family. Even physical escape is not enough to ensure a fresh start. Promising basketball player Sammy didn’t have to return to his Mississippi birthplace if he was worried about the humiliating failure of his professional sports dreams.

Getting to the joys of Mabry’s drama takes a while. The relationships among the large number of cast members take a while to sort out, especially when one lacks an ear for Southern accents. But the eventual payoff is worth waiting for.

Despite these strengths, this film risks being overlooked by Frameline patrons. Its LGBT content is mainly limited to the Leigh storyline. More importantly, quality films with multiple black lead characters have not always received the audience support they deserved, as “Ballast”’s fate demonstrated. Don’t make that mistake with one of Frameline 33’s more powerful films.

John G. Young’s “Rivers Wash Over Me” initially feels more difficult to watch than “Mississippi Damned.” The hardships visited upon former New Yorker teen Sequan feels almost Biblical (specifically Old Testament) in the intensity of their misery. The inevitable gay bashing inflicted on Sequan by his Southern town classmates feels almost like an unsurprising part of the town’s fabric. What prove harder to take are the numerous secrets and denials infest the town like cockroaches. A familial betrayal is difficult to endure especially when it takes a particularly dark turn. The film’s visually harsh look seems oddly appropriate.

In some ways, Young’s film feels initially like a mashup of such dramatic cliches as the fish out of water and the aforementioned small town with a secret. Having the story set in a supposedly modern South where the major symbols of authority are both black doesn’t dim that familiarity. Nor does the quasi-Edenic look of the town make its social oppressiveness any less of a prison.

Derrick Middleton’s and Elizabeth Dennis’ central performances don’t quite succeed in bringing freshness to the film’s dramatic setup. One can see how their characters are oppressed in different ways by the town’s inhabitants. Yet the bond they form at first doesn’t sufficiently go beyond the social isolation/sexual interest nexus to reach some new emotional territory.

The title of Young’s film ultimately alludes to the desire of flawed people to obtain redemption for their past sins. The sequence where this act of redemption takes place is shot beautifully and poetically, with a mixture of passion and quiet joy worked in. An artfully shot tear in Dennis’ eye provides a nice visual touch. But being redeemed does not automatically guarantee a happy ending. As the film shows, it’s what one does post-redemption that matters more.