Four Fallacies of the Jungle Eviction 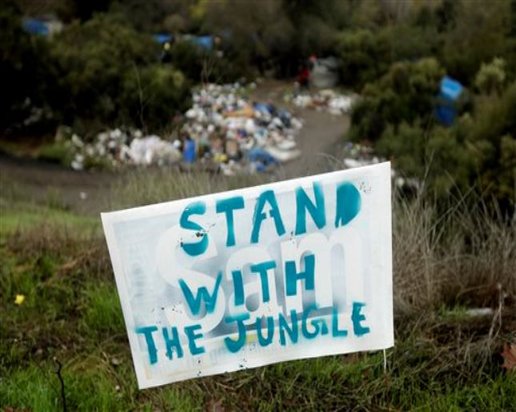 On December 4th San Jose began the eviction of what has been called America’s largest homeless encampment: 68 acres of creek-side property inhabited by some 300 men, women, and children residing in tents, shanties, and underground adobe dwellings. The city’s homeless response manager Ray Bramson justified the camp’s eviction on grounds of “environmental risks,” and its “unsafe and unsanitary conditions.” Yet, it is difficult to understand how an eviction might relieve any of these conditions.

First, the eviction will not mitigate the ongoing environmental damage to Coyote Creek by homeless habitation. Even if the city succeeds in preventing re-settlement after the “sweep” it will not resolve the pollution problem, but merely move it around. The Jungle is the largest camp in a much longer archipelago of 247 tent cities along Santa Clara’s waterways that contain 1,230 people according to a recent county census. While the $7,000 investment in an eight-foot steel fence and several boulders to seal the site may restore the natural habitat of the former campsite, it will be at the cost of increased environmental degradation further upstream where the evicted will relocate.

Second, the eviction will exacerbate rather than improve the unsanitary conditions faced by the evicted – pushing them further from clean water, recycling centers, and toilets. An obvious alternative would be for the city to provide access to toilets, clean water, and trash disposal. In November Jungle residents protested for better sanitary provisions, in an event eerily similar to those occurring in the favelas of Rio and slums of Mumbai, shouting “No Potty, No Peace” in front of the three port-a-potties provided by the city. Not only was the 1/100 person to toilet ratio grossly inadequate, they were only open between 8am-4pm. After hours, residents were encouraged to use city-provided sanitary bags. When a United Nation’s Special Rapporteur on Human Rights visited Sacramento’s Tent City and discovered similar conditions the city was found in blatant violation of the Universal Declaration on Human Rights, for denying access to safe water and its policy of evictions. Far from a solution to unsanitary conditions, San Jose’s evictions are likely in violation of international law.

Third, eviction will only increase the insecurity and violence experienced by the evicted. From the interviews I’ve conducted with residents of twelve large encampments across the west coast, the primary reason the homeless “chose” to live in such congregate settings as opposed their limited alternatives is the “safety in numbers” from attacks by other homeless people, pestering by police, and harassment of the housed who all too frequently exploit, rob, rape, or beat-up the un-housed. Yes, the Jungle was a violent and dangerous place. The sad reality is that it was likely safer than the places the evicted will be spending the coming nights.

City officials will refute the critiques leveled above by highlighting their “housing first approach” to eviction, noting the 144 Jungle residents who have been successfully housed with two-year rental subsidies, the 60 who have vouchers in hand, and the opening of 250 winter shelter beds. This incomplete excuse is the fourth fallacy of the Jungles eviction. The claim that the provision of the regularly scheduled 250 temporary shelter beds is an ample response to a permanent eviction in a city with more than 5,000 unsheltered individuals is an insult to citizen’s intelligence. The fact that 60 voucher holders, more than one-third of recipients, could not find housing even with government guaranteed rent is an embarrassing indictment to city, state, and federal policies that subsidize wealthier homeowners at the expense of poorer renters.

Furthermore, as other cities such as L.A. and San Francisco move towards coordinated assessments to distribute limited housing to those most in need, one must wonder if San Jose’s blanket-provision of vouchers to Jungle residents is the most efficient and just use of resources or merely a strategy to reduce the Public Relations bruising of the eviction. Most importantly, the housing provisions did not cover all those in the Jungle. At least 50 people were evicted by police along with countless others who left beforehand in anticipation of eviction.

As San Jose captures the momentary media, it’s important to remember that there is nothing exceptional about the Jungle in its existence or its eviction. Mass homeless encampments are increasingly common fixtures of US cities and the rationales for their evictions follow nearly identical scripts. As the media has its field day with the latest expression of the pornographic poverty of squalor in the midst of opulence that the US is so prone to produce, it is important to remember that those living in the Jungle were not there “by choice,” but because they had nowhere else to go. Expelled from all other public spaces by the region’s criminalization of the poor, they have now been pushed into more remote, dangerous, and unsanitary jungles along Coyote Creek.

Author Bio: Chris Herring is PhD Candidate of Sociology at University of California Berkeley. His research focuses on homelessness and urban policy. He is the primary author of the National Coalition on Homelessness report: “Tent Cities in America: A Pacific Coast Report.”