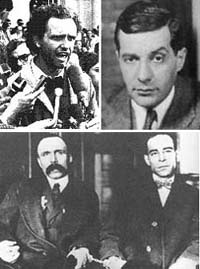 In the late 1980’s, I published an anti-Columbus op-ed in a South Philly weekly that received a lot of negative comments from readers who questioned why a “paesan” would attack their hero.

It was precisely because I was a “paesan” that I questioned why Italian/Americans are so hung up on this man who didn’t “discover” a continent that already had many thriving civilizations. Though he was from Genoa, Christopher Columbus didn’t sail for Italy. There was no “Italy” at the time the Nina, the Pinta and the Santa Maria left a Spanish port. Italy wasn’t a country until 1861.

Then there’s the problem of the genocide that followed in his path.

I understand why Italian-Americans embraced Columbus. When we arrived in this country, we weren’t exactly greeted with open arms, any more than any other immigrants. There were NINA (No Italian Need Apply) notices in store windows, as well as lynchings in the South, where we were considered nonwhite.

The bulk of Italian immigration was from the south of Italy where 1500 years of colonialism left the peasants dirt poor. Many anarchists were among those who left the poverty to seek a better life. Here in America they became involved in the labor struggle and the many worker strikes of the early 20th century.

Two of their comrades, Nicola Sacco and Bartolomeo Vanzetti, were framed for the alleged murder of two payroll clerks. During their trial, Judge Thayer referred to them as “Dagos,” a derogatory name for Italians. Though worldwide support emerged for them, Sacco and Vanzetti were found guilty and executed in 1927.

During World War II, President Roosevelt supported putting all Italian/Americans into camps, as was done with the Japanese. It ultimately didn’t happen. But thousands of Italians were relocated from their homes and even jailed for the “crime” of being “enemy aliens.”

Still, Italian-Americans continued agitating for social change. In 1942, singer Frank Sinatra recorded “The House I Live in,” a song that made the case for racial tolerance. It was written by Communist songwriter Abel Meeropol, who also penned “Strange Fruit.”

From 1935-50, Harlem Congressman Vito Marcantonio fought hard for progressive legislation (including civil rights) and was attacked vociferously for it by Joe McCarthy and his buddies. During the Civil Rights Movement, Italian Americans, such as singer Tony Bennett and Father James Groppi, joined the pickets and marches down South. Lawrence Ferlinghetti, Diane DiPrima and Gregory Corso were prominent voices among the Beat poets. Student activist Mario Savio led the Free Speech Movement at Berkeley.

I’ve been saying it since the mid-80s and it’s still true: It’s time to dump Columbus and instead celebrate the long-standing progressive tradition in the Italian-American community.