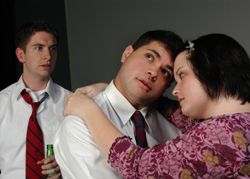 The Play “What’s Wrong With Angry” will be stirring things up on the New Conservatory Stage starting June 11. British playwright and screenwriter Patrick Wilde takes on the social taboos surrounding teen homosexuality. This is about a young teen that lives in a small English town. He is sixteen, sexy and gay. He fools his parents by telling them what they want to hear. But, at school he falls secretly in love. He wants to shout his love from the rooftops or at least from the top of the schools stairs. The play was made into the award-winning film (screenplay by Wilde, and directed by Simon Shore) titled “Get Real”. It was released in the USA in 1999. About the movie one critic said “The key to Get Real’s success is that the characters are carefully developed and their emotional difficulties are not trivialized.” That of course is the movie. We will see how the play goes. It all comes down to casting in the end – doesn’t it? This production will be directed by John Dixon.

Also coming up and the New Conservatory is the always fun evening “Ticket to the Tonys.” You can watch your favorite actors accept, Coo, and thank everyone in New York and Hollywood for adoring them. This will all be shown on the NCTC large screen. In addition – you will be regaled with live jazz, an eclectic wine bar, and “Taste of Hayes Valley,” highlighting local cuisine from Paul K. Restaurant and Michael’s Octavia Lounge, among others. A silent Auction starts the evening off at 7pm. You can bid on a Las Vegas trip, a Cold’s gym membership and a behind scenes tour of KRON-TV and even a gift basket from Yum. Or perhaps you will like a photo session with Theater photographer Lois Tema. If not, there are other treasures for you to bid on. My favorite is the dog training session with Pouch Coach. Special guest stars performing will be Terese Genecco, Spencer Day, Billy Philadelphia, Meg McKay, Richard “Scrumbly” Koldewyn and Cindy Goldfield. Online info: www.nctcsf.org. Mention beyondchron. It won’t get you better treatment – but mention it anyway. Then again it might.

A San Francisco Porn Star is about to burst (so the speak) on the scene in San Francisco again with the movie “That Man: Peter Berlin”: The documentary combines conversations with Berlin, who is now in his 60’s – but still maintains his muscled body. At least it was that way recently when I ran into him at “Max’s” in the Geary Theater district. He was on his way to the opening of “I Am My Own Wife.” In the movie you will see images of Berlin from his Glory Days. Days that inspired the famed artist Tom of Finland. Anthony Collins of Fab Magazine said about the film: “It’s worth seeing for the eye-popping archival footage alone, but the interviews also capture life at the centre of the most debauched and freewheeling moment in modern gay history.”

‘CROWNS’, the hit play from TheatreWorks in Palo Alto is movin’ on up to San Francisco at the Marines Memorial. Here is what a reader sent me. “I enjoyed the energy, the music the performers and — the hats. It wasn’t great but was quite an enjoyable experience for me. The other members of my group didn’t enjoy it as much as I did – but I love theater and loved the delightful energy.” Have an instant review you would like to pass on about a show. Send it – and we will print it. But – keep it short.

TOO BAD NEWS: BILLY DEE WILLIAMS WITHDRAWS FROM “THE MAMBO KINGS”. — DUE TO AN AGGRAVATED HIP CONDITION. We will announce his replacement next time. Mambo Kings” is Broadway Bound. However, unlike “Lennon” that has been scratched from its Broadway run – Kings has all the ingredients to make it. The musical follows the journey of the Castillo brothers from Havana in the early 50’s. To the stages of the grand dance clubs in New York. Once there they lead the onstage big band and follow their women in a sensual dance of romance and passion, all set to a sizzling Latin score. The Mambo Kings were looking for the American Dream. And this musical may just be it. At the Golden Gate theatre starting May 24.

OPERA, ORPERA – WHO’S GOT THE OPERA? Under the Umbrella name of “Gamble of Love” the San Francisco Opera is bringing a summer festival to the City with these fun Operas. “The Queen of Spades” on June 12, “The Pearl Fishers” on June 14, and “Cosi Fan Tutte” on June 24. The Opera Company also will have a new Director of Communications starting on July 6. See the inside stuff you find in this column!

I’LL BET YOU DID NOT KNOW THAT JUNE WAS NATIONAL ACCORDION AWARENESS MONTH, DID YOU? Well – June is – and The Cannery at Del Monte Square in SF is hosting the 15th annual San Fran Accordion Festival. And it’s free and open to the public. It’s Sunday June 5, from 12 noon – 6pm. You’ll get to hear Steve Shen – Chinese Accordion soloist/vocalist, The Highgates – Traditional Irish Music, Simka – Klezmer Music, Conjunto Romer, Big Lou’s Polka Casserole, San Franciso’s Main Squeeze Finals and Bella Chiao. Don’t laugh. Guitarist Nils Lofgren started on the accordion, Billy Joel and Barry Manilow also play the accordion, and Actress Lucy Liu plays the accordion.even Counting Crows use accordion a lot. The Hit show “Forever Tango” featured two bandoneonists. And wouldn’t you know – China is the largest manufacturer and exporter of accordions in the world. Squeeze on that!

LOCAL PRODUCER RECEIVES MULTIPLE TONY NOMINATIONS. San Francisco producer Carle Shorenstein Hays received nominations for all three of the Shows she produced on Broadway this season. They are “Doubt” – the new play by John Patrick Shanley. It has received 8 Tony Award nominations, including Best Play – that is more than any other play on Broadway. In addition Shorenstein Hays recent production of August Wilson’s play “Gem of the Ocean” received 5 Tony Award nominations, including Best Play. The San Francisco Producer is also involved with the blockbuster hit “Julius Caesar” starring Denzel Washington. At Broadway’s Belasco Theatre the play had the highest grossing week ever — $625,292 for the week ending May 8. It’s been a good season for Shorenstein Hays. After the Tony nominations for this season were announced – she said: “I am thrilled that new works by important playwrights like John Patrick Shanley and August Wilson have received the recognition they so deserve.”

On the subject of Shakespeare – locally you can see a super performance of “Othello”, directed by Sean Daniels on June 4 at Bruns Memorial Amphitheater in Orinda. There’s nothing like Shakespeare under the stars. Check it out. calshakes.org.