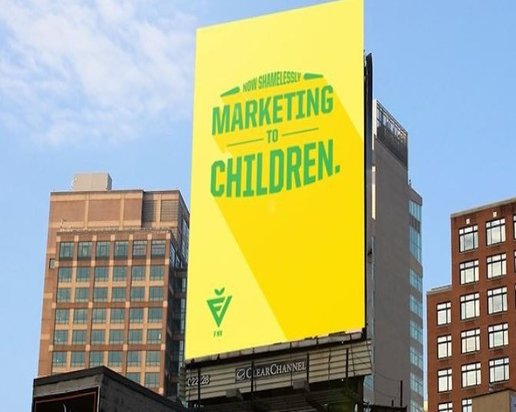 The big announcement from the recent Partnership for a Healthier America Summit was a marketing campaign for fruits and vegetables called “FNV.” It was celebrated by First Lady Michelle Obama, who enlisted the help of celebrities to promote it. It also received support from children’s health advocates including Bettina Siegel of The Lunch Tray, who wrote, “Celebrities Marketing Vegetables to My Kids? BRING. IT. ON.”

I’ve written before about the problems with marketing food to children, so my reaction could be summed up in one word–dismay. As I took a closer look at the details of FNV, what I found may even give pause to those who support the marketing of food to children.

My experience with the National Parent Teacher Association taking funding from the Healthy Weight Commitment Foundation (HWCF) trained me to take a closer look at where the money comes from and why.  For HWCF, some of the the names behind it were Coca-Cola, PepsiCo, General Mills, Hershey’s, Mars, and Nestlé.

For FNV, the Produce Marketing Association represents names like Bayer Crop Science, Monsanto, and Sunkist. These corporations are associated with controversies over bees and neonicotinoids, monarch butterflies and glyphosate, and kids and soda.

When FNV uses the phrases “prepare to be marketed to” and “shamelessly marketing to kids” it makes my skin crawl, but they elicit a completely different response in others whose opinions I respect.  Would these health advocates have been as thrilled with the FNV campaign if Coca-Cola was one of the founding supporters instead of Bolthouse Farms (a juice company)?

As reporter Eliza Barclay put it, “When it comes to choosing between sodas and juices in the beverage aisle, the juice industry has long benefited from a health halo.”

Is the health halo of juice also at play here?

Knowing people who have Type 2 diabetes, yet continue to drink lots of juice, I’m skeptical about why Bolthouse Farms is interested in helping foot the bill for this ad campaign. Shouldn’t we be asking the same questions we’d ask if a soda company was involved?

The Center for Science in the Public Interest has published a report “Selfish Giving: How the Soda Industry Uses Philanthropy to Sweeten its Profits”.  It includes important questions organizations should ask before accepting a sponsorship. Some of these are:

“Can we stand behind the products, services and positions taken by the partner?”

“Why does the partner want to work with us?”

“Does the proposed partner hope to use our organization’s name or its relationship with us to advance its public image, public policy agenda, or its marketing?”

“Does the proposed partner expect that a relationship with us will help secure our support or our silence on activities or issues on which we do not agree? This is a strategy sometimes used by corporations attempting implicitly to “buy the silence” of potential critics.”

Did fans of the FNV campaign consider these kinds of questions in terms of FNV and their sponsors?  When I did, the answers were troubling.

I can’t stand behind Bolthouse Farms’ juice, coffee, and tea products because they are too high in sugar.  I want to see a reduction in juice consumption, so I have a fundamental disagreement with the companies that promote it.  The controversies with Bayer Crop Sciences, Monsanto, and Sunkist also make me want to keep my distance.

Will FNV be an “in” for juice marketing the way Fuel Up to Play 60 (FUTP60) became an “in” for dairy junk food?  FUTP60 is a school health and wellness program founded by the National Dairy Council and the National Football League.  It promotes chocolate milk consumption to children and as registered dietitian Andy Bellatti put it, “Fuel Up to Play 60 is a marketing campaign hiding behind a veneer of nutrition science.”

I’m sure many of the health advocates who initially supported FUTP60 did so because they wanted to promote health and wellness, not chocolate milk.  There are many parents like me who don’t want their children getting chocolate milk marketing at school, but once FUTP60 gets into a school, it’s nearly impossible to get it out.  Will we see a similar thing happen with FNV?

Juice is considered a form of fruit for USDA school meals and half of the weekly fruit offering can be in the form of juice.  Health experts in the United Kingdom have already sounded the alarm on children having so much juice and Katharine Jenner, campaign director of Action on Sugar, said: “Juice should be an occasional treat, not an everyday drink. These processed drinks are laden with sugar and calories and do not have the nutritional benefits of fresh fruit and vegetables.”

The new World Health Organization (WHO) guidelines include fruit juices as part of the free sugars to limit to less than 10% of daily total energy intake.  Even with the WHO’s call to slash sugar consumption by two-thirds, I suspect that Bolthouse Farms’ and PMA’s support of FNV will make it even more difficult to take on the issue of juice in school meals.

When our kids are older, will they care whether their Type 2 diabetes came from soda marketed by Coca-Cola or juice marketed by Bolthouse Farms?

A great deal has been written about why there should be no food marketing to children and I agree with Dr. Marion Nestle when she says, “Food marketing to kids is flat-out unethical and should stop.”

She supports FNV because “it’s not aimed at young children”, but a spokeswoman for the ad agency behind the campaign mentioned it will include “sponsorships of youth sports leagues and teams.”  John Cena is one of the celebrities used in the FNV ads and because of his appeal to children, he also appears in commercials for Fruity Pebbles cereal on Cartoon Network.  Are children expected to make the distinction to trust him when he is marketing FNV but not to trust him when he is marketing Fruity Pebbles?

While increasing fruit and vegetable consumption is an important goal, it should not come at the cost of adding more marketing to children’s lives when they already face too much of it.  Children need to be able to hear their own internal hunger cues, but those are being drowned out by the din of excessive marketing.  One of the things I used to love about fruits and vegetables is that they weren’t a brand, but now children are losing that freedom from marketing as well.

FNV was presented as a way to fight back against junk food marketing, but it sends a defeatist message that it’s too difficult to do the things that will really make a difference in ending junk food marketing to children.  Instead of shrugging our shoulders and saying, “If you can’t beat them, join them,” let’s raise hell and tell the marketers to back off our kids.

Tomorrow in BEYOND CHRON: Bettina Elias Siegel of The Lunch Tray responds.