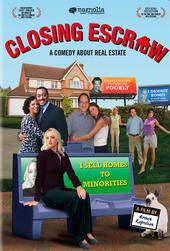 I like to support Indie films because they often are more genuine and heartfelt, and sometimes hilarious and brilliant. “Closing Escrow” starts out with a knockout premise. The first half of the film that makes fun of the Real Estate Biz is sassy and fun. I was having a great time. Like the movie “Best In Show,” it takes an industry and pulls out all the non-stop excesses.

Armen Kaprelian’s movie keeps you busy doubling up with laughter at all the absurdities of the Real Estate Business. It seems that some of the dialogue was actually improvised. There is an uptight, politically correct agent who is working to find a home for an African American couple. She is obviously a Republican Agent. Oh, they don’t say that – but you can tell by the way she dresses and the sly racist comments she throws out.

Then there is the Real Estate Neighbor who works his butt off to find a house for his neighbor, only to get shafted by them in the end when they decide to keep the house that they now live in. After seeing what was on the market they got the idea to incorporate the same décor into their house. And to make matters even worse – he tells the R.E. neighbor – “I’ve enrolled in Real Estate School.” That of course does not sit well with his once friendly neighbor.

As a ‘Mockumentary’ this film can give you cramps from all the laughter, at least halfway through. Then, suddenly the movie becomes way over the top. Along comes a crazy Agent who takes a buzz saw to homes to destroy the looks, so that the owners will take a lower bid. It’s downhill Animal House from then on. The laughs become less and less frequent, until it spirals out of control into boredom.

I still would recommend the film though, just to enjoy the premise in the first half. It probably won’t stay on movie screens for long – but will surely be on D.V.D. There are lots of grins here, so I wouldn’t pass it up. The acting is some of the best you will see on the screen.

IT’S ABOUT DAMN TIME! The New Conservatory Theatre Center present on Sept. 21 as part of their Summer Cabaret Series Amanda King in ‘It’s About Damn Time’. You may remember King in the world premiere of Terrance McNally’s ‘Crucifixion’ in 2005 at NCTC. She’s a tart and sassy entertainer and a dynamic singer. If it were possible – she’d be the love child of Ann Margaret and Bette Midler.

ANNIE’S GOT A GUN! Broadway by the Bay continues it’s 42nd season with the always fun “Annie Get Your Gun’. The great thing about Broadway by the Bay is that you get to see high quality Broadway Shows at family prices. And what about those tunes in “Annie”? Remember, “Anything You Can do,” “Doin’ what comes Naturally” and “There’s No Business Like Show Business.” You’ll here all these Berlin Classics in this show. Alex Perez, who also directed the award-winning production of Miss Saigon, will direct ‘Annie’. Where to go: Broadway By the Bay — San Mateo Performing Arts Center, 600 Delaware, San Mateo.

CIRCO ZERO…Culturevulture.net sez: “funny, quirky, disturbing, beautiful.” Called ‘Sol Niger’ (Latin for black sun and refers to a solar eclipse) is a new work of contemporary Circus and Performance. Runs: 9/20 – 29. Deal: on the 20th and 26th…pay what you wish. Now that’s a real Dealie.

SHAWS ‘HEARTBREAK HOUSE’: Award winning Les Waters will direct “Heartbreak House” at the Berkeley Rep Roda Theatre. In the Reps hands you can expect unbridled wit and plenty of freethinking. As they say: “If ever there was a playwright that belongs in Berkeley its George Bernard Shaw.” Runs: Aug. 32 – Oct 14.

GOLDA’S BALCONY will be at TheatreWorks in Mountain View Center for the Performing Arts. Camille Saviola stars as the strong-willed Golda Meir. A stunning and revealing play. Runs: Oct 3 – 28, 2007.

A BLOODY GOOD TIME AT A.C.T. The piercing whistle and Sweeny Todd (The Demon Barber) is back in San Francisco on the American Theatre Conservatory Stage. David Hess is Sweeney and Broadway legend Judy Kaye plays Mrs. Lovett who grinds up the victims and makes them into little pies. “Have A Little Priest” – she happily sings. This musical is surely one of Sondheim’s best and most tuneful musicals. You will always remember the song “Johanna.” John Doyle’s Broadway revision of the musical is as sharp as one of the Demon Barbers razors. Runs: Aug. 30 – Sept. 30. Thurs. Sept. 6 at 8pm is a “Bring What You Can/Pay What you wish night”. Note: Patrons can pay any amount for tickets when they bring a donation of children’s books, diapers. Or coffee beans to benefit Raphael House, a shelter and support program for homeless families in San Francisco’s Tenderloin District. Tix go on sale at 6pm day of performance.

FLY INTO SPACE WITH BILL PULLMAN: Expedition 6 is a World Premiere Theatre Event that takes place Sept 8 – Oct 7 at the Magic Theatre. Pullman uses a company of eight actors, movement, live music, and low-flying trapezes in this stylized new work based on writings by astronauts. www.MagicTheatre.org.

SIX DEGREES OF SEPARATATION: Bill English directs this famous, successful Broadway play at The SF Playhouse on Sutter @ Powell. The story is this intriguing play is that a young African-American man gains access to the homes of upper class New Yorkers by pretending to be the son of actor Sidney Poitier. It’s easy to convince people that you are someone that you are not. It happens everyday. Everyone is an actor. It’s a great commentary on what drives people. And we all know what that is…money, fame, social standing, comfort and a human connection. RUNS: SEPT. 22 – THROUGH NOVEMBER 17. www.sfplayhouse.org.

UPCOMING ‘BEST OF BROADWAY SHOWS: “The Color Purple”, “A Midsummer Night’s Dream”, “The Drowsy Chaperone”, “And The Wiz”. A Fifth Show is yet to be revealed. www.shnsf.com.

DAVID MAMET PLAY TO OPEN AT OFF-MARKET STREET THEATRE: The Custom Made Theatre Company is presenting the Mamet play “The Old Neighborhood” at 965 Market St., Suite 409. The story is about Bobby Gould who returns to his old Chicago neighborhood to try to connect with his old buddies, and a former lover. But, can we ever go home again? It’s not easy, as you will find out as you follow Bobby to the old hangouts. RUNS: Sept. 8 thru Oct. 27.

Like “Peter Pan” discovered – there is a whole new world out there. And you aint gonna be a part of it if you just sit and mulch in front of that T.V. Get Up! Get Out! Its good for ya! There…don’t you feel better now?

Now that I have given you the secret to non-aging…let me know how it’s working for you: leehartgraveshow@yahoo.com.