Five Singers ‘Put it Together’ in Sondheim Show, Singer Shawn Ryan Makes Round Two on America Has Talent 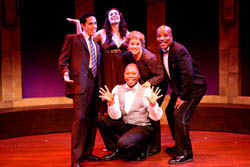 Stephen Sondheim, the witty tunesmith, actually put “Putting it Together” himself by using songs from his stage musicals like Company, Follies and Sunday in the Park with George and others to create a revue about a middle aged couple who’s marriage is ‘spent’. They invite a younger couple and another young man to a party in their ritzy Manhattan digs. Sondheim’s songs about love, marriage and relationships bring out the biting realism of relationships in general. Sondheim is hailed as ‘the intelligent writer of music’ – and in this revue his brilliance shines brightly and rather darkly as this story revolves into ‘not a happy party’. The wife sings to her husband in one song “Who can contend with an endless erection/That falls to its knees when it sees its reflection?” The husband tells the young man that “Marriage is where it’s been/but it isn’t where it’s at.” So, with song and a little dance, the older couple tell each other in cryptic ways what to do: “See a shrink”, “Get a Dog” “Adopt a child”. Near the end of the first act the wife sings the fabulous “Could I Leave You.” (Follies). Here is a snippet from the hilarious lyrics. “Could I Leave You? Could I bury my rage/With a boy half your age/in the grass? Bet your ass!”

I like most of Sondheim’s shows and his music…but this revue is lacking something. It’s not the cast – or the production. No, I think that the revue would benefit more with an orchestra – than just with a piano. It definitely would give it the sound the way that they were presented in the original musicals that Sondheim took them from. Also, the show has been around for years, even starring big names like Carole Burnett and has been a critical success – but not a big money maker. What I would like to see is a new “Putting It Together” (Like New Faces did). Let’s see a “Putting it Together – 2007” using songs from more recent shows like “Sweeney Todd”, “Passion”, “Into the Woods”, and even from some of his failed shows. That’s my wish.

The most dynamic performer was Brian Yates Sharber. He keeps the show from becoming overly dreary. He keeps the ‘Puttz’ up there. Do yourself a favor and get hooked on Sharber and your summer will look better.

The young couple are sweet. Jeff Leibow, the young good-looking lad is without a doubt Mr. McDreamy. It’s those Bing Crosby eyes. Who wouldn’t fall in love with him? He has great confidence on the stage and glides in and out of despair and happiness with little effort. Leibow makes this tale relatable. Kate Del Castillo is gorgeous and is a good actress – but falls short on some of the songs. They need to be punched up.

My Fav is Mary Pat Green, the jaded older woman in the marriage that has seen its day and then some. She is a delight with “Should I Leave You” and “Like it was”. However, I did feel that her “The Ladies Who Lunch” from Company could have used a little more oomph.

The multi-functional set by Bill English is intriguing. It is the best I have ever seen in this revue. Michael Palumbo’s lighting got the mood down to a tea. Bree Hylkema’s Costumes put us in the right time zone and the scenic design by Lauren English was great. “Putting” is smartly directed by Diana Shuster and Music Director David Dobrusky has the talent of twenty pianos. All in all it was a very rewarding evening in the theater. I know what you want to ask me, so I’ll form it as a Sondheim type question. “Should I go?” – “YOU BET YOUR ASS!”

AT THE PLAYHOUSE AT 533 SUTTER STREET (at Powell)

Well, Shawn Ryan made it. He will be on round two on July 12th on ‘American has Talent’ (the results will be on July 13). I watched two hours on the 28th to see Ryan do his bit. Never did see him. But at the end they flashed at the bottom of the screen pictures will a voice-over naming those that also made the cut…and they named Ryan. However, if you can’t wait to see him on the show – you can see him singing his song with Kelly Park on the piano on the Web. To view it go to www. shawn-ryan.com. The clip is quite nice and you get to hear the judges comments. Will he win the competition for a million bucks. I predict that the competition is too heavy. For instance there is that little African American girl – who did a bang up job on “I’m Not Leaving” (originally sung by Patti Labelle) from ‘Dream Girls’. And there was also another African American Girl who sang a Whitney Houston song that blew the audience away. My bet it that is the Mil will go to the 11-year old. There is an old saying in show biz. Never go on a talent show with children. They always win. But back to Shawn Ryan. He swears that NBC told him that he will be shown on T.V. on July 12th. As far as ‘America Has Talent” – my view is that it is just a glitzy “Gong Show”. Better yes — and the addition of Brandi as one of the judges was a wise choice. Oh yes, like American Idol that have a Brit on the show with a sharp tongue. Could that have anything to do with the fact the Simon Cowell is one of the producers? You think? I’ll be Dianne Feinstein here for a moment…”Having said that….Yada…yada…yada..I liked this show much more than Idol.”

Ennio creates over fifty characters by using paper. He is a fast change artist that thrills with each costume change.

THE DEVIL WEARS PRADA: Meryl Streep says she didn’t base her character on a famous Vogue Editor. She sez “I based it on men”. So, you see…Men are the Devil. But, do they wear Prada?

The Berkeley Rep is bringing back the extraordinary talent ENNIO to the Roda Stage. Who is Ennio and who has he been? Well on stage this great talent has been Aretha Franklin, Britney Spears, Diana Ross, Marilyn Monroe, Snow White and hundreds of other Celebs. His quick Change characters on stage with costumes made from paper are truly mind blowing. He’s a live Paper Doll. Do I hear the Mills Brothers singing in the background? Or, have I lost it again? Think it over – you’ll get it. The show starts in July and is bound to sell out fast. Tix at Berkeley Rep.org

HEY…HOW ABOUT SOME FREE STUFF TO SEE? You can go to the Stern Grove Festival to see some amazing free shows…The Fillmore Street Jazz Festival gets more than 90,000 visitors a year…and then there is the Precita park Urban Youth Arts Festival featuring musical performances, mural painting and traditional visual arts. And…how about some ‘Jewels in the Square’ – they present free entertainment ranging from barbershop quartets to punk-rockers every Wed. and Sun. in Union Square (some call it Nintendo Square). Now in its 30th season ‘People in the Plaza’ give free summer concerts showcasing Bay Area Musicians around Market Street in 90 concerts between July and Sept.. Yerba Buena Gardens Festival has over 100 artistic, cultural and community events going on. There is also the San Francisco Theatre Festival. the City’s largest one-day theatre event. It is run entirely by volunteers. FREE IS ALWAYS BEST. Look for these and other Free events around the City. Or go to SFARTS.org. Thank you for asking. Buzzin aims to please.

SHOCKING! Well, not so shocking. Demi Moore did it first. You know, being photographed nude for the cover of a famous Mag while she was pregnant. Well guess what? Britney Spears will appear in the August Issue of Harpers Bizarre (cover your eyes) Nude and Pregnant. Oh, my god…how original. Now that’s Bizarre! No…I won’t Buzz Off.

Or…maybe I will – it’s the end of the Column.

TALK TO ME AT: buzzblogpost@yahoo.com

SEND ME YOUR PRESS STUFF: buzztatler@aol.com

PODCAST ME, BLOG ME, MP3 ME, ITUNE ME (but don’t try anything else) AT web.mac.com/buzzmixer or CLICK HERE: