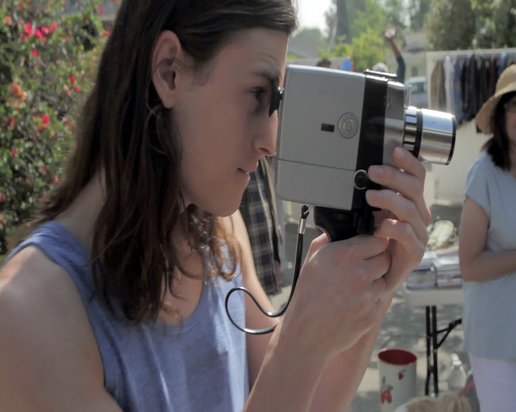 Home movies have gone from kitsch to chronicles of minority cultures not accorded places in the history books.  For the protagonist of Michael J. Saul’s “The Surface,” these movies turn out to be a key for him to connect to the world.  This feat is especially impressive given that the family members captured in the home movies aren’t even his.

What hold do a stranger’s home movies have over college student Evan (Harry Hains)?  He has an apparently stable life as the lover of the wealthy Chris and the company of good friends.  But that surface stability turns out to be far from solid.  Evan and Chris’ relationship has become unsatisfying and not the pairing of two equals.  The friends in question are mainly Chris’ friends.

Seeing the 8mm footage of two boys swimming and playing together opens for Evan a vision of a life he feels he’s never had.  Abandoned by both his birth parents, “The Surface”’s protagonist has been bounced from one foster home to another, never shaking the sense of being a permanent outsider.  His gayness only serves to underscore his emotional alienation.

What makes Evan’s reaction to seeing the home movies remarkable is the lack of calculation in his discovery.  The garage sale visit that leads to the discovery of the old 8mm camera is made on impulse.  The visual imperfections of the old film images make the moments captured and preserved feel more precious and alive than something caught in an iPhone’s chilly precision.

The sense of preciousness and life that Evan soon develops affects how he views the world.  The pre-8mm camera Evan comes off as moody and distant, leaving no clues on how he can establish a sense of being present in the world.  After using the 8mm camera has taught him to see the world anew, he begins noticing and appreciating the sight of flowers in bloom or the nocturnal beauty of light fixtures attached to trees.  His filming of Peter, the son of the man who sold Evan the used camera, becomes a sign of his awakening appreciation of others.

Evan’s relationship with Peter winds up being emotionally fraught for both parties.  For the older Peter, it’s atonement for a missed opportunity with a gay childhood friend.  For the far younger Evan, it’s a chance to bond with an emotional equal who’s rediscovered the preciousness of lost moments.

Saul doesn’t directly explain the meaning of his film’s title.  One guess may be that “The Surface” alludes to Evan’s lack of perspective on his life.  Swimming, especially when his whole body is submerged, provides the young man with the comfort of a watery cocoon.  Breaking the water’s surface allows Evan the virtues of air and an outside perspective.  Another previously mentioned guess would treat the title as an allusion to the facile happiness that conceals the true discontent that lives in Evan’s heart.  Whatever interpretation proves accurate, this small cinematic gem’s visual and emotional truths make it well worth a time out from the Pink Party.

2015 Frameline Award Recipient Jeffrey Schwarz’ delightfully entertaining documentary “Tab Hunter Confidential” frees its subject from the corn-fed cleanliness straitjacket.  The closeted 1950s Hollywood superstar reflects honestly and genially on his amazing life.  The gems to be gleaned from this film include shots of Hunter’s frequently shirtless film appearances and his tortured romance with equally closeted actor Anthony Perkins.  By film’s end, viewers can see Hunter has no regrets for trading Hollywood celebrity for the happiness of a grounded life.

Ellen Brodsky’s documentary “The Year We Thought About Love” follows Boston’s True Colors: Out Youth Theater’s efforts to create a play dramatizing love by drawing on the troupe members’ personal experiences.  The eventful eight-month play gestation period winds up including handling losing actors and facing the emotional scars of the Boston Marathon bombing.  Troupe members include the charismatic gay Haitian Giftson and the transwoman Alyssa.  But the worthwhile end result helps straight kids push past ignorance and homophobic stereotypes.

A series of photographs capturing a life opens the drama “Carmin Tropical.”  But what begins as a blossoming life memorialized on film ends as a transphobic murder mystery.  Yet as Rigoberto Perezcano’s gripping drama unfolds, its tale of a patiently unraveled act of violence turns into a very human tragedy.

Daniela, a muxe (transwoman), has been brutally murdered.  Transwoman Mabel, her best friend, travels back to her old hometown of Juchitan to learn the truth about Daniela’s death.  She becomes re-acquainted with the friends she left behind and the relatives left bereft by Daniela’s murder.  But old ghosts and sins from Mabel’s own past soon start making appearances.

Betrayal winds up revealed as part of Mabel’s past.  Her years-long absence from her Juchitan friends’ lives was marked by her disappearance without even a goodbye.  Ironically, the reason for Mabel’s disappearance winds up being a source of betrayal against her in turn.

Personal guilt seems a major motivation for Mabel’s trip back to Juchitan.  Solving her old friend’s murder might help Mabel atone for not getting back in touch with her friends after things didn’t work out.  Visits to Daniela’s old parents and seeing Daniela’s old room help ground Mabel and give viewers a sense of the tragedy of the muxe’s death.

Perezcano’s film leaves viewers ambivalent about Juchitan life.  Certainly the knowing one’s neighbor element looks better than the alienating environment of Mabel’s factory job.  The daytime siestas testify to a less hectic lifestyle.  Yet the club that Daniela and Mabel worked in feels more like a haven from outside hostility than a symbol of social acceptance of muxes.

Mysteries come with a promise of a return to order on solving its puzzle.  Yet the order restored in solving “Carmin Tropical”’s mystery doesn’t encourage positive feelings.