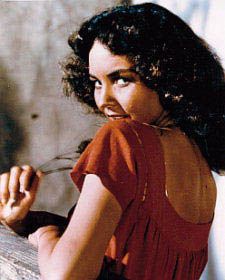 The Film Noir festival is back a new series “Misunderstood Actresses” in glorious Black and White at a new mysterious location downtown. It is so secretive that even Sam Spade wouldn’t be able to find it. This roving band of film lovers wanders like a bunch of gypsies and put up their screen and chairs wherever they can talk a Landlord in to giving them a large room suitable for a screening. This time they have found a real Jewel on Second Street near Howard. Lucky for them a dot-com company went bust. The Landlord who owns many properties in town was gracious enough to let the Film Noirettes use the room for this series.

The first showing was of Ruby Gentry. The film starred Jennifer Jones who by the time of Gentry had plenty of experience playing the lusty lady from the other side of the tracks. The townspeople thought she was a tramp (well, maybe just a little sluttish). She is sleeping with a guy from the right side of the tracks (Charleton Heston), who never intended to marry Ruby, but still wanted to see her on the side. He marries a girl who comes from money. After all a guys got to get ahead. As he says to Ruby: “I just don’t want a job Ruby, I’ve want this lifestyle in this town. I love this town. I love everything about it.”

Basically Ruby Gentry is a remake of Duel in the Sun. In that movie Gregory Peck was the rich guy and Jennifer Jones played a half breed Indian who loves Peck. He likes her body – but marries the rich girl. Ruby Gentry could have been titled “Duel in the Swamp” – because “Sun” and “Gentry” both have dangerous dual scenes near the end of the film.

This movie helped to promote the image of Jones even if the film did not do that good. It has become camp in a way. The acting is really pretty bad – but I still enjoyed seeing it.
Here are some Noir facts. Joan Fontaine turned down the role of Ruby. The score is performed solely by a harmonica. And the song “Ruby” became #1 on the Billboard Charts.
The film is set in the South, but none of the characters sound southern, except for “Ruby”, who puts on a kind of southern tramp accent. Jennifer Jones is still alive and lives in Beverly Hills and still looks good. She was married to Robert Walker. When he died she married movie tycoon Daryl Zanuck who wanted to make her a star and he did. Jennifer Jones is on the board of the Norton Simon museum in L.A. She married him when Zanuck died. Somewhere along the line she tried to commit suicide. You could say that her life was like a Film Noir movie.

The next screening will be “Experiment Perilous” – starring “Hedy Lamarr”. Once declared the most beautiful woman in the world. And she was. Lamarr had quite a life also. She was once arrested for shoplifting cosmetics in Florida. That’s Florida for you. She was also a brain. She invented an electronic gadget that helped win World War II. Experiment Perilous was made in 1944 and Lamarr plays “A wrong girl for the right side of the tracks.”

The Noir insider tells all: There is a new book out about film noir that is just chuck full of wonderful stories about film noir. You have all heard of the Film Critic Frank Rich who wrote reviews for the New York Times for years. Well, his son Nathanial rich has written this book called “San Francisco Noir”. He is currently on book tour – so look for him in SF. The big news is that he has written a piece about the San Francisco Film Noir group that makes these films flicker again. To be part of these fun evenings go to screenings@hotmail.com. It’s free, but donations are accepted.

LONDON: Billy Elliot the film is now a musical. “It seems that Elton John was so identified with Billy in the movie that he just had to write the music for it. My contact in London sez: “I loved it. It was brilliant, not a good subject one would think for a musical. It works like magic. The sets were amazing and very clever, a lot rising from under stage, a massive job to set up I would think. Brilliant dance routines both Ballet and modern, surging music. It was very movie with good musical numbers. Most not that memorable except for “Electricity” which you come out singing. The musical follows the movie script. A full house of course and a standing ovation. “WOW!” Broadway here it comes. Of course, we will see it about five years after it lands there. Unless, they try out first in San Fran. Wouldn’t that be great? I would go to London to catch it – but I won’t fly – and Wells Fargo has informed me that the Stage Coaches no longer run. I’ll wait for them to build a bridge so that I can drive.

THE KITCHENETTES NEWS: No they don’t actually do kitchens, but they do sing at the Purple Onion in a new show called New Stars of the Purple Onion. This Friday they have an open Mike, and starting May 6, they have lined up a great array of talent for their “New Stars”, Becky Jones and Brie Jones, Mark Johnson, Coley Grundman and Deborah Taboloft. It’s all live at the famed Purple Onion. Also coming soon will be the Talented Barry Lloyd (who never uses my quotes) in “Let’s Fly Away”.

There is also Comedy at the Onion. Love him. The legendary Mort Sahl returns where he started. Sahl is the first political satirist that I ever heard. He is still the greatest. “Bizarro” cartoonist Dan Piraro will perform his one-man show. That is bound to be “Beyond Bizzaro”. San Francisco has jump started the careers of many comics. Somewhere on that stage is a new TV comedy waiting to take off and it could be one of these – Brent Weinback, Matt Besser and Kasper Hauser and Clinton Jackson. Mort Sahl will be at the Onion for four shows only June, 9, 10 for this special event. Hey, he was on the cover of Time Magazine – I would think that you could drag your self away from T.V. for one nite.

FREE – LET IT BE FREE! Yep, it’s free and outdoors at Yerba Buena Gardens at Third & Mission on May 1st – 1pm til 3pm. What’s free you ask? It’s the opening of the Yerba Buena Gardens Festival with a high-energy infusion of mesmerizing dance and drums of the African Diaspora featuring Diamono Coura West African Dance Company. Reconnect Dance Ensemble, and the African Queens Youth Performance Troupe. Linda Lucero, Artistic Director of the Festival told me – “I am honored to open our season with a program celebrating dance and music of the African diaspora. Bring a blanket and a picnic basket and enjoy this free opening.” O.K. we’ll do just that.

THE THIRSTY TOUR: The power punk pop Vegas band “Thirsty” will be in San Francisco at the Hemlock Tavern at 10pm along with “Chinese Radio”. Martin Stein of the Las Vegas Weekly says this in a review. “Straddles the razor between hard rock and even harder rock.” Now that’s HARD. Thirsty is: Billy O’Malley – guitar/lead vox, Graham McLachlan – bass/vox and Corky Gainsford – drums.

Long before Dorothy drops in, two other girls meet in the Land of Oz. One is born with emerald-green skin and is misunderstood. The other is beautiful and very popular. How these two witches become friends and then enemies is a story you will never forget. One becomes the Wicked Witch of the East and the other Glinda the Good Witch. The story will consume you starting Aug. 5. At the Orpheum Theater. “Wicked” runs thru Sept. 4. I refused to play one of the monkeys when I found out that I would be killed on stage by the evil witch. Not a very attractive part.

SO – INSTEAD OF TIP-TOEING THROUGH THE TULIPS THIS SPRING – DO SOME TOE DANCING AND VISIT SOME OF THESE GREAT EVENTS.