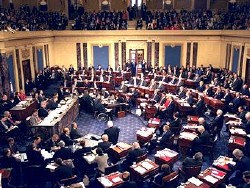 End of “Secret Holds” the One Real Victory

While the media was focused on the President’s State of the Union Address last week, one of the most crucial reforms that progressives need died quietly – with few outside of the liberal netroots paying much attention. By a slim vote of 46-49 on Thursday, the U.S. Senate defeated a proposal by Jeff Merkley (D-OR) to actually require filibusters (as opposed to mere filibuster threats) before a 60-vote threshold is needed to end debate. The only tangible victories of this “filibuster reform” were: (a) an end to “secret holds,” where Senators can anonymously threaten a filibuster that requires 60 votes to overcome, and (b) a “gentleman’s agreement” by Mitch McConnell to not push the “nuclear option” before 2015. During the first two years of the Obama Administration, the Senate became the place where progressive legislation went to die – even though Democrats had a “filibuster-proof” majority for part of this time. Now, with a Republican House and a President eager to alienate his progressive base, a Democratic Senate is our only hope at advancing good legislation – and ending “secret holds” is the first baby-step.

But rather than just being a downer about what happened, progressives should recognize first the hard-work that Daily Kos bloggers David Waldman and Chris Bowers did to advance this reform. When dealing with wonky procedural changes that are difficult to explain, it’s always hard to generate attention or media publicity – but they worked to push this change in the Senate Rules, which will pay dividends down the road. As Bowers explained in a must-read analysis at Daily Kos, the netroots did some great collaboration with offline activist groups this time. And, the newer Senate Democrats were with us on this issue.

By now, the problem is obvious to anyone paying attention. For two years, Democrats controlled the House and Senate – but very little got done. The Employee Free Choice Act died a quiet death, Climate Change Reform failed to materialize, we did not see any Comprehensive Immigration Reform – and while we did pass a version of health care reform, the Public Option died because Joe Lieberman wanted to piss off liberals. All because a Senate majority wasn’t enough – we needed “sixty votes” to override any filibuster threat. Rather than require Mitch McConnell and the Republican Senate to speak without end, these mere “filibuster threats” effectively killed all legislation.

As a result, Republicans – and conservative Democrats like Ben Nelson, Blanche Lincoln and Mary Landrieu – announced that they would simply filibuster every proposed bill until they got their away. Moreover, the Senate even had the protocol of a “secret hold” – where any right-wing Senator like Jim DeMint could anonymously hold up any bill, which requires a 60-vote majority to overrule. House Democrats began to call House Republicans the “opposition,” but refer to the U.S. Senate as the “enemy.”

So what’s the problem with changing rules – requiring these filibusters to actually be real? The Senate Rules can only be changed by a super-majority, unless passed on the first day that the Senate is in session – where it would require a simple 51-vote majority.

At Netroots Nation last summer, New Mexico Senator Tom Udall announced that he would propose a series of filibuster reforms on the first day of January in 2011 – when such changes could get a simple majority. I asked him why this wasn’t done in January 2009 (when everyone knew that Republicans would filibuster everything), and he replied: “We were under the myth that we had a filibuster-proof Senate once we got 60 votes. I remember asking about it, and was told not to worry about it because we’d have 60 votes once Al Franken got seated. Well, we found out what 60 votes got us.” In other words, we had to wait until 2011.

But even passing it on the “first day” of the new Senate was a problem. By January 5th, activists had already spent months preparing for this change – with online petitions ready to ask Democratic Senators to take a party-line vote and change the rules. But I could tell it was going to be watered down when Harry Reid and Chuck Schumer announced that filibuster reform would pass later in the month. But because the Senate did not formally adjourn until the end of January, it would still technically be on the “first day” of session.

The final “compromise” only has one major victory that progressives can be proud of – no more secret holds. But only the most rabid Tea Party Republicans opposed this (the reform passed 92-4), as allowing the obstructionists to hold up legislation anonymously violated all pretenses of democracy. As the last bastion of Democratic control, we deserved a lot better than just that.

No, the real reform we need is a requirement that Senators who wish to filibuster actually talk – as opposed to make it their “intention” to filibuster, and thus kill debate and the legislation altogether. That vote, which only managed to muster 46 Senators (all Democrats) was killed not just by Republicans – but by obstructionist Democrats. Democratic Senators Max Baucus of Montana, Mark Pryor of Arkansas, Daniel Inouye of Hawaii, Carl Levin of Michigan and California’s own Dianne Feinstein are the reason why we will continue to see mere “threats” to filibuster carry the day in the U.S. Senate – like how it obstructed our agenda in 2009.

But Chris Bowers noted a silver lining in that vote. “Among the Democrats who opposed it,” he wrote, “only Mark Pryor was first elected after 1992. As such, it is possible to make this an ongoing campaign issue, and to one day elect a Senate where a majority of Senators favor enshrining the real filibuster in the chamber’s rules.”

This reminds me of what Al Franken said at Netroots Nation last summer. The 2006 and 2008 elections produced a new crop of more progressive Democratic Senators, and they are now the “Coalition of the Impatient” who are demanding an end to business as usual in Washington. The Democratic leadership in the Senate is still used to being in the minority, that they don’t know how to govern – and are incapable of challenging Republicans and changing rules like the filibuster. And the lesson from this vote is – we need more and better Democrats to get filibuster reform.

Problem is, next time we have to make it our priority #1 in the new Senate.