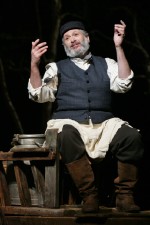 There are so many things that make this musical endearing. Here are a few: It’s epic in plot — the setting is unique and it’s all about traditional family values (that soon tumble down around them). The song “Tradition” starts off the show with a bang. The rousing joyous song revs you up for what follows. The cast and Tevye sing and whirl around the stage. Tevye narrates, sings, dances and mingles joyfully with the townspeople. The dancing seems to be a mix of Gypsy and Russian-esque. It could also be called Honky Tonk Folk. And that’s a good thing. It makes it sound very authentic …

Some people may think, “Oh, this is all about social relevance. Well – lets ask Tevye” — “It is – but on the other hand it’s not.” It is a heartwarming story about Jews in a small Russian town, who are intimated by Russian guards. They all try to make a small living. There is a poor Tailor – A Butcher and Tevye – who ekes out a small living by selling Cheese. He has a big heart and is deceived into thinking that the little village will always remain the sleepy little cozy place that it is. But Russia is about to change in horrible earth shaking ways.

The Tradition is this town is told in brilliant songs. They sing about a Matchmaker, happiness, and a fiddler on the roof, a creaky old Rabbi and Tevye’s wife Golde. The music is haunting while still fun. Composer Jerry Bock and lyricist Sheldon Hayrick have captured the drama and conflict of the story with every vibrant lyric and note.

Tevye (Harvey Feuerstein) keeps this massive musical engine going with his easygoing wisdom and humor. His raspy voice and his alternating expressions of compassion radiate over the audience. And what fun the village Matchmaker brings to the pot. She is always trying to arrange marriages for Tevye’s daughters. One of the greatest things about this musical is that Tevye, with his eye-contact with the audience, make you part of the story. We are completely absorbed. It’s like we actually live there. And it’s instant love for these people and the music.

This is probably the best “Fiddler” that I have ever seen. It is refreshed – and sounds and feels like it is brand new. They have added some things that make it seem like a whole-new show. The acting and singing couldn’t be better. It’s top-notch.

This satisfyingly rich musical is a joy from start to finish. You certainly won’t want to miss this sterling pleasure!

Here are more outstanding actors: Rena Strober (Tzeitel), James Davis (Hodel), Deborah Grausman (Chava), Kerry Alexander (Shprintze, Hannah Delmonte (Bielke), Erik Libersman (Motel, The Tailor), Colby Foytik, The Student. Arthur A. Atkinson (The Fiddler). And there are many more. Everyone on the stage is a STAR.

AT THE GOLDEN GATE THEATRE

PICTURE THIS: Two guys and a prostitute in Amsterdam. O.K – here’s the deal. The two guys go to Amsterdam to check out the sex scene. One is a real dog “He would screw anything that moves.” However, he strikes Gold when he sees a gorgeous Gal (BRITTANY K. MCGREGOR) in one of the street Windows. He pays – she ‘Tea Bags’ him. They have several sessions (3) and he pays her more to come to their room (Cheap Hotel) to satisfy his long-time Buddy Matt (DAVEED Diggs).

Steve Budd (Davis) (STEVE BUDD) is probably the worst jerk that you will ever meet. He must have invented the word Obnoxious. If I had to be alone with him for even 20 minutes I would have to go to therapy. What can I say – he is vulgar, cruel, inconsiderate — and he is married to his best friends ex-girlfriend. Now, what kind of a friend is that?

Brittany K. McGregor (Christina – the Prostitute) is like a wilting flower. She does what Davis wants her to do (screw his buddy for instance). She follows his orders – but has fallen for the creepy Davis. Christina is married (a marriage of convenience). Her husband is Gay – and he needs her as a cover. So they got married and she gets a monthly stipend.

Back to Amsterdam. The room where the boys are staying has a “Red Light” outside that softly beams into their room. It’s easy to hate Davis – who is everyone’s worst nightmare. A Frat boy who is basically brain dead. A poster boy for “Animal House”. I hated him – and you will find that you will also.

Matt his friend is another matter. He is a soulful writer, who has not had much luck with meeting women who will stick with him. He is sexy, kind – but quirky.

The boys arrive back in New York. One snowy evening Matt hears someone knocking on the door. He asks who it is. A woman’s voice gives a name that he does not recognize. “I don’t know you. What do you want” – he shouts. At first she doesn’t answer – but then says that she is looking for Davis. He opens the door – little does he know that this will lead to more nightmares for him. She has bad news for him. She needs help. He tries to help – Matt loves her, but she still loves the Jack-off.

Those must of been some Balls on Davis that she ‘Tea Bagged!”

You wonder how this is all going to end. Davis comes back into the picture. And continues to mess up Matt’s life. How much more can Matt endure. What will happen to Christina, and will Matt try suicide again? You’ll have to see it to find out. I don’t give out endings. Especially when they are this shocking. But, I will say. Keep you eye on the red dress.

This is one of the Best plays of the year! And Brian Katz has mounted an Extraordinary directing achievement. This play is one of the BEST ACTING ENSEMBLE IN AGES! . They burn up the stage — as they have an emotional meltdown. “An Absolute Can’t-Miss!”

WARNING: Contains the use of herbal (non-toxic) cigarettes, simulated drug use, nudity and strong adult language/situations. ) – O.K – NOW I know that you will want to see it!

AT THE CUSTOM MADE THEATRE

Aly Mawji and Lorri Holt in “Animals Out of Paper” at SF Playhouse. Directed by Amy Glazer.

ANIMALS OUT OF PAPER – EXPLOSIVE – SPELLBINDING

Like folds in paper – relationships always leave a mark. Ilani Andrews is a world-renowned origami artist. But she is not a happy person. Recently, her husband left her and her dog that has only three-legs bolted out the door and has not been seen since.

In her kind of unkempt apartment her doorbell rings. Someone wants to talk to her about origami. It’s raining; she does not know the person who is at her door. She tells him that she does not know him. He tells her that his name is Andy – and that he just wants to talk to her about a student that he wants Ilani to tutor. After several more rings – she finally lets him come up.

After much conversation, she agrees to meet the student. The student arrives at her home/studio. He is an annoying young man, but an origami genius. Suresh is his name – and he is a blatant troubled young man. He tells her that her studio is a mess – and that she needs to clean it up. He can’t work in all the disarray. He says all this very bluntly – not kindly.

This quirky comedy has some serious undertones. Ilani’s life is already a mess and it gets more complicated with this teenage, hip-hopping student. And Andy, the man who introduced them gets a surprise. Andy is like an origami that has been flattened by a steam Iron when he discovers that his trust has been betrayed. As Ilani says – “So much of what I am – I’ve lost.” Yep – Rajiv Joseph, the playwright, sure has a way with words.

This story unfolds with genuine poignancy. It touches in surprising ways what really matters in life: Friendship, Connection and love. Ilani says: “I hurt everyone I meet”. You know what? This is a play of rare joy. It’s a knockout hit.

Aly Mawji (the Student) has such scalding intensity. His performance is positively historic. You’re gonna fall in love with him. Lori Holt (the older woman) mesmerizes. Her first class acting engages you with every word and action. David Deblinger (The Teacher) is terrific! His performance is heartwarming and powerful.

This fast-paced, gripping and provocative play will keep you on the edge of your seat. I guarantee it! It’s one of the years best.

Amy Glazer’s directing really brings out the fullness of this powerful story.