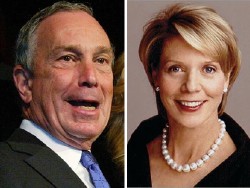 Cathleen Black has had an extraordinary career as a media executive, but it was not until New York City’s Mayor Bloomberg designated her as the city’s new public school chancellor that she became an almost household name. On November 19, three New York Times reporters teamed up for a front-page story on Black that also took up an entire inside page, as the paper elevated a story for its New York section into national news. Is Black’s appointment so critical for NYC public school kids to justify ongoing national coverage in the Times? Can she make up for the ongoing cutbacks in school funding, increased class size, and lack of demonstrated progress of the corporate-backed emphasis on school testing? Unfortunately, the media’s excessive and irrational devotion to Black and other school chiefs as saviors for the nation’s school kids ignores these realities. The truth is that neither Black, nor any other school chief, can overcome inadequate school funding by running schools like corporate turnaround specialists, and fetishizing their importance distracts from schools real needs.

Education has to be the only field where rising to the top requires no experience. Careers spent in the profit-driven corporate world are not only not disqualifying, but are now identified as the best backgrounds for public school leadership.

This bizarre phenomenon could not have emerged without the media exalting this new breed of education leader. And the harm caused by such fetishizing of school chief’s was made particularly obvious last week by two stories involving the New York City public schools.

The November 17 New York Times reported that “three years after a landmark agreement to cut class sizes in New York City’s public schools, classrooms are swelling across the city, a result of budget cuts and spending decisions that have reduced the teaching force.” The story quoted Michael Mulgrew, the president of the United Federation of Teachers, who said that class sizes rose even when the economy was strong because “It’s clear that their intention was never to lower class size. They don’t believe in it.”

In a September 27 hearing before the NYC Council Education Committee, Leonie Haimson, Executive Director of Class Size Matters, testified, “this year, with approximately 18,000 more students and 2,000 fewer teachers, many Kindergartens are at 25 students per class or higher; many 1st-3rd grades are at 32 or more, and the administration is going backwards fast on its promise to reduce class size. Class sizes have been sharply rising in recent years, with no end in sight, despite the city’s legal and moral obligations under the Contracts for Excellence to be lowering class size in all grades.”

This increased class size came under the leadership of the Bloomberg Administration’s prior chancellor, Joel Klein. Klein, like Black, came to the job with no educational experience and the media consistently touted his corporate background as just what the New York City school system needed.

While a careful Times reader might have caught the November 17 class size story, nobody could have missed its front-page story on November 19 describing Black as “the closest thing to Superman that exists.” This was one of multiple stories on Black’s selection last week that the Times saw fit for its national edition, eclipsing if not overwhelming the real world impacts of the steady increase in class size.

The media message is clear: school districts face problems that are not chiefly attributable to inadequate money, or on the increased number of students living in poverty, but rather on the lack of a “Superman” running the system. The use of that term to describe Black on the Times front page was no coincidence, but was designed to tap into the corporate-backed, anti-union Waiting for Superman movie that promotes the fetishizing of school chiefs.

Cathleen Black is a longtime media executive who has earned $4.7 million the past two years serving on corporate boards. It is reported that “her parties are legendary,” and that she “belongs to the Westchester County golf club where the initiation fee today is about $300,000.” But for all of her management skills, Black’s job at Conde Nast was recently given to a rival, and the Times reports she now has a position “with diminished responsibilities.”

In other words, Black at age 66 has her best days in the corporate world behind her and needed a new high-profile challenge. And her longtime friend Mayor Bloomberg found one, even though she fails to meet the minimum requirements and will need an “exemption from a state law that says the chancellor must hold a professional certificate in educational leadership and have at least three years of school experience.”

So at the same time the Bloomberg Administration is raising class sizes, laying off teachers and cutting funds from New York City public schools, it is moving heaven and earth to ensure that Cathleen Black, an exceptionally talented executive with absolutely no education experience, is approved as chancellor.

Joel Klein is leaving his job to join FOX News founder Rupert Murdoch’s News Corporation. Despite a record of fraudulent test score increases and no discernable improvement in schools, the Times praised him on his departure, claiming that “Mr. Klein did deliver on a central promise: to challenge orthodoxies, shake up the status quo and risk dislike in the name of progress.”

Based on that standard, we’re lucky that Bloomberg did not appoint failed Delaware Senate candidate Christine O’Donnell to head the NYC schools. She certainly was willing to “challenge orthodoxies” and “shake up the status quo,” and also needs a job.

Wouldn’t it be great if the media focused as much on the lack of school funding and laying off of teachers across the nation as it did on the appointment of new school chiefs? Or if it regularly reported on the millions of kids forced by poverty to constantly change schools, and whose educational success depends on stable housing, much smaller classes, and more individualized instruction?

But real improvements for educating low-income children cost money. A lot more than the salaries of “superstar” school chiefs.

So we have to make believe that people like Cathleen Black can make the difference, and that it’s a problem of leadership and bad teachers, not inadequate resources.

No matter how many times the “Superman” model for improving public schools fails, the media and corporate elite continue to promote it as if it had never been tried. We shouldn’t be surprised that Republicans get away with promoting tax cuts as job creators despite the Bush record, as failed strategies for our nation’s schools never go out of fashion.