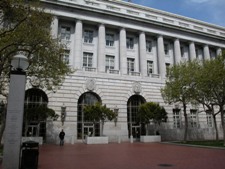 Since Twitter committed to moving to 9th and Market Streets in San Francisco, an estimated $1 billion has been invested in a stretch of the city that drew little interest for nearly fifty years. And while investment in the core problem area of 5th to 8th Streets continues—J.K. Dineen of the SF Business Times reported that the tall green building at Sixth and Market( 995 Market) sold last week for $17 million— activities around UN Plaza continue to undermine public confidence in Mid-Market’s revival. But help is soon coming, and from a very unlikely source: the federal government. While federal aid to cities has declined dramatically over the past decade, the feds have spent millions restoring its long neglected historic building at 50 UN Plaza. By no later than January 2014, 650 General Service Administration employees will be working at the site. They will be joined by a fulltime staffer to encourage positive activities in UN Plaza, and by a federal police force to monitor the area.

As I wrote in October 2010, the city cannot revive Mid-Market without making UN Plaza more desirable. People often tell me of their latest unpleasant confrontation with a belligerent alcoholic in the Plaza, adding that it discourages them from coming to the area. I also appear to be the only person who was not aware until recently of the active daily “flea market” in stolen cellphones and computers at the Plaza’s border at 7th and Market (in front of the Carl’s Jr.); if your phone is stolen in San Francisco, that is the first place you should go to buy it back.

The federal government has jurisdiction over UN Plaza, and has long ignored its problems. But this is about to change. Workers could begin moving back to 50 UN Plaza as early as this September but in no event later than January 2014 (the opening was originally anticipated for December 2012 but the new dates are now firm).

The federal police will not allow openly illegal activities in the area along McAllister bordering 50 UN Plaza. That area behind the fountain has long been a place that knowledgeable pedestrians avoid.

I have also heard that the feds are going to treat security around 50 UN Plaza as they do at the Phillip Burton Federal Building on Golden Gate and the 7th and Mission federal building. You don’t see illegal cell phone flea markets or aggressive alcoholics around either structure.

A federal police presence and 650 workers in UN Plaza will not solve all of its problems, but it should make a noticeable improvement.

The demolition at the CityPlace (now Market Street Place) shopping center site on the south side of Market between 5th and 6th has finally begun. This is a site that was approved as a condo project in the mid-1990’s and has since sat vacant for nearly two decades.

There’s still no word about prospective tenants, though the recent upheaval at JC Penney explains why reports it would be the site’s anchor tenant did not materialize. This project remains critical to the revitalization not simply of a key stretch of Market but also to the first block of Turk as it meets Mason Street, so the fact that it is finally moving forward is good news. The shopping center is now projected to open in 2015.

The 970 Market site, once owned by the developers of CityPlace and where arts groups once hoped to congregate, is in contract for sale. Owner Lone Star Hedge Fund entertained multiple offers, and I assume Biz Times reporter Dineen will be identifying the winning group any day now.

The real estate sales package for 970 Market projects two twelve story buildings for the site, one of which would also help revitalize the abandoned and shattered south side of lower Turk. A Turk Street entrance to the building—which community groups will insist upon—will go a long way toward once again making lower Turk a safe area.

There is a scaffold up and renovations have commenced at Mid-Market’s historic Eastern Outfitting building, perhaps better known locally for the “Furniture and Carpets” title on its front. And a onetime ornate office building at 973 Market that a prior owner tried to convert to condominiums prior to going belly up is finally back on track; this is the property across from the Warfield Theater that has had a scaffold up for years due to a series of lawsuits filed by a prior owner against his successors.

Angelo Sangiacomo is demolishing the last vestiges of the original Trinity Plaza (formerly the Del Webb Townhouse) as he is completing building two of the new Plaza and heading toward building three. Nearly everyone thought Sangiacomo was crazy to invest $500 million in the distressed Mid-Market area, but Twitter’s relocation has turned his 1900 unit project into a bonanza.

The new CVS on the south side of Market at 7th is under construction, and many cheer its displacing negative activities at the site. I get that point but cannot applaud the arrival of a national retail chain to a Mid-Market area that needs distinctive businesses to succeed.

The recent 30% increase in police staffing along Mid-Market has made a noticeable difference. Some believe it has shifted criminal activity into the Tenderloin but my own experience does not confirm this. In fact, due to a recent crackdown on public drug dealing along Leavenworth Street, the Tenderloin likely has less crime than before (the first block of Turk being the exception).

The long troubled Warfield Hotel at the corner of Turk and Taylor is for sale and any new owner will be a vast improvement over the longstanding ones. A responsible owner of the Warfield will not renew leases to the building’s two problem groceries in its retail spaces, which itself would improve safety on the block. And a new hotel operator will ensure decent living conditions on a regular basis, essential for attracting quality tenants.

Mid-Market remains a work in progress. But the federal government’s willingness to finally invest resources in the area is the type of unforeseen positive development that the area needs—and has long deserved.