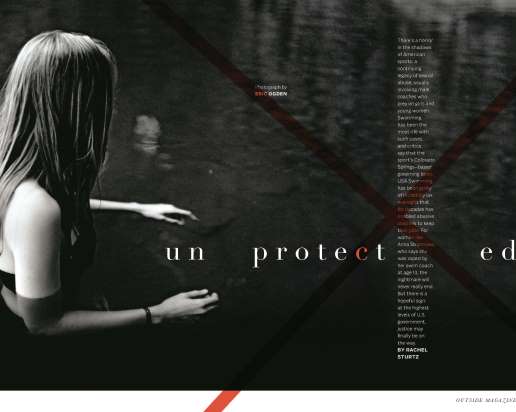 The most undercovered scandal in sports is the widespread sexual abuse of untold hundreds of early- and mid-teen female swimmers by untold scores of coaches. Money- and image-obsessed USA Swimming, the national governing body under the umbrella of the U.S. Olympic Committee, has been covering up these practices for decades. White-collar criminal accounting and oversight fixes remain a length and a half behind the public’s uninformed indifference.

That may be changing with a 15-page article by writer Rachel Sturtz in the December issue of Outside magazine, which hits newsstands today. It is the best hope in years for getting this multi-generational, Catholic Church-scale national disgrace the attention it deserves, and for spurring investigations set in motion over the summer by retiring Congressman George Miller of California’s 11th District and several offices of the Federal Bureau of Investigation.

In addition to the many past and present cases of coach abuse, there are probes of the financial manipulations of USA Swimming’s subsidiary, the “United States Sports Insurance Company,” headquartered in Barbados.

I began writing about this subject for Beyond Chron nearly three years ago. Five months ago, the New Times weeklies of South Florida published a lengthy cover story on the movements of and allegations against a long-time Fort Lauderdale area coach, Alex Pussieldi, who has fled back to his native Brazil, where he is now the face of network swimming coverage in the run-up to the 2016 Summer Olympics in Rio de Janeiro. That article, largely based on the reporting of my partner Tim Joyce and myself, coalesced with a successful public petition by celebrity open water swimmer Diana Nyad and other abuse victims to deny the scheduled International Swimming Hall of Fame Induction of Chuck Wielgus, USA Swimming’s CEO since 1997.

Nyad was molested by Hall of Fame coach Jack Nelson, who died last week at 82. Essentially unrefuted abuse allegations continue to hover over at least two other Hall of Fame coaches: Paul Bergen and Murray Stephens. (An international juniors meet, at an Oregon club run by Bergen’s son and sponsored by Nike, was named in honor of Bergen until just last year. And Stephens, who went underground two years ago and is no longer the face of the famous North Baltimore Aquatic Club, still owns its home pool complex, for which he bills it more than a half-million dollars a year in rent.)

The organizer of the anti-Wielgus petition was 1984 Olympic gold medal swimmer Nancy Hogshead-Makar, then senior director of advocacy for the Women’s Sports Foundation. The foundation refused to back a second and more ambitious petition calling for Congressional intervention. Instead, the WSF (which was founded by tennis great Billie Jean King) began negotiating with the Olympic Committee to be part of an announced new $15 million “independent” sexual abuse investigative agency. The new body would be modeled after the U.S. Anti-Doping Agency, whose media-star chief is lawyer Travis Tygart. Yet, as only Joyce and I have reported, Tygart was himself a USA Swimming counselor, for the Bryan Cave law firm, in coach abuse cover-ups in the early 2000s.

After the WSF bailed on the cause, Hogshead-Makar quit. She now heads a new advocacy group called Champion Women.

Last month Congressman Miller and his staff at the House Committee on Education and the Workforce released correspondence in which he urged the FBI to “fully investigate USA Swimming’s handling of both past and present cases of child sexual abuse.”

The San Jose Mercury News responded by running a story in which sportswriter Elliott Almond quoted an unnamed USA Swimming official saying that the FBI merely met with the organization to collaborate on further improvements in its “Safe Sport” program. In emails with me, Almond and Mercury News editors refused to say whether they were aware that the FBI office in Campbell, just outside San Jose, had subpoenaed thousands of pages of discovery documents in civil lawsuits by abuse victims in Santa Clara County. USA Swimming suppressed those documents for years, even paying more than $20,000 in court sanctions, before the California Supreme Court ordered their release.

Among the documents in the FBI’s possession are sworn statements to courts, by USA Swimming’s Wielgus, which practically define the crime of perjury. For example, Wielgus claimed that Peeping Tom videotaping of undressed athletes by some coaches were not even “on the radar screen” before 2008. At the FBI’s behest in 1998, Wielgus had directed a nationwide alert to aquatic centers to be on the lookout for John Trites, a Pennsylvania coach who went on the lam and made the Most Wanted list for that very practice. And records uncovered by Joyce and me show that USA Swimming, along with police and public officials in Florida, began covering up allegations of Alex Pussieldi’s clandestine videotapes of teen male swimmer tenants, and stash of videos of his own sex with underage boys, no later than 2004.

Almond’s Mercury News story was the most cowardly piece of journalism in the Bay Area this year. But Rachel Sturtz’s comprehensive account in Outside should help take Congressman Miller’s work with the FBI to another level.

Outside said Wielgus did not make himself available for an interview. According to USA Swimming, he was too busy dealing with the recent DUI of alcoholic gambling addict Michael Phelps.

Irvin Muchnick (http://ConcussionInc.net), is author of Concussion Inc.: The End of Football As We Know It, which will be published early in 2015.