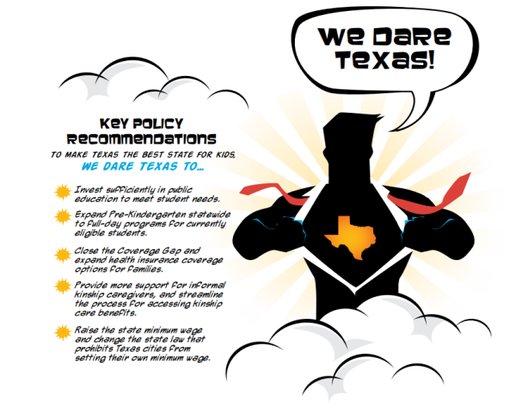 The American Dream is fading for many Latino families today and for their children tomorrow.  This is especially true in Texas where many Latinos face significant barriers to building wealth and future opportunities for their children.  As a result, over half (2.3 million) of Latino children is at risk of facing the same disadvantaged position or worse than their parents when they are adults.  Wealth means making a living wage or better, and having assets (home, saving, retirement fund, etc.) that create more choices and resources for one’s children.

The reasons for this grim future for Latino children stems from the continuing lack of upward social and economic upward mobility among Latino families.  In fact, compared to other Latino groups across the country, Latinos in Texas are worse off based on an analysis of 16 measures encompassing educational attainment, employment, poverty, earnings, the prevalence of disabilities, and insurance (Table 1).

Overall, Latinos in Texas ranked 30th in their socioeconomic well-being compared to Latinos in other states.  Texas Latinos were particularly worse off in educational attainment, earnings among workers with low levels of education, disabilities among persons 25 to 44 years of age, and insurance coverage.  Moreover, being born in the United States did not improve the standing of Latinos, as among U.S.-born Latinos they ranked nearly dead last in insurance coverage and the lack of a high school diploma.

In contrast to Latinos, Texas Whites and Blacks fare comparatively better relative to people from their own race in other states.  For example, while Latinos had an average rank of 30 on the basis of the 16 socioeconomic indicators across the 50 states and the District of Columbia, Whites and Blacks each ranked 21st.

For Latinos in Texas, the results translate into:

Indeed, the future is not promising for Latino families, particularly their children.  The causes are:

Latinos are involved in advocacy and policy efforts to address many of these issues, plus recurring voter suppression and immigration issues. Unlike before, they are occurring under an era of globalization and corrosive federalism. Globalization is the worldwide movement of goods, ideas, capital and people which has impacted the state economy, labor, jobs, and wages. Corrosive federalism is the current politically partisan federal and state conflicts over who should have policy authority regarding social welfare programs, education, healthcare, immigration, and environmental protection.

Important questions emerge from these issues. Are Latinos in an organized pro-active or reactive position in their policy involvement?  Does their involvement address structural problems that underlie most issues; e.g., conservative policy-making limiting human capital investments, regressive tax laws, or revenue and budget approaches that undercut equity and prosperity? Is there a statewide Latino policy strategy that builds ‘capacity’ to influence policy making, and involves on-going assessment of progress?

In summary, Latino’s in Texas are a proud working-class people; unfortunately, hard-working is not enough since many are far from achieving the wealth and prosperity that realize the American Dream.  It’s ironic that most of nation’s largest Latino advocacy organizations began in Texas, yet the state Latino bienestar is near the worst in the country. Without the necessary ‘political power’ to achieve meaningful policy changes Latino labor will continue to be ‘On the Cheap’, and another generation of children will not achieve economic prosperity.

Juan H. Flores is a Consultant & Advisor to the La Fe Policy Research and Education Center. He can be reached at juan@ix.netcom.com.

Rogelio Saenz  is Dean of the College of Public Policy, University of Texas at San Anotnio. He can be reached at Rogelio.Saenz@utsa.edu