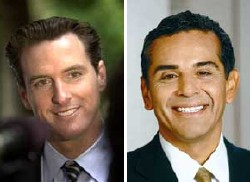 According to the SF Chronicle’s Matier & Ross, nearly all of the political experts they consulted felt that California Attorney General Jerry Brown would gain more than Gavin Newsom from the non-entry of Los Angeles Mayor Antonio Villaragosa in the 2010 Democratic race for Governor. Not to be too blunt, but this analysis is completely wrong …

Had California’s economic collapse not caused the Los Angeles economy to crater, Mayor Villaraigosa would have quickly become the front-runner in the Governor’s race. He would have won the primary and the general election going away.

Recall that prior to Los Angeles having to layoff 4,000 teachers and make far more draconian cuts to programs than in San Francisco, Villaraigosa was seen as such a strong candidate that there was talk that Newsom would switch to run for Lieutenant Governor. Even the most recent poll had Villaraigosa essentially tied with Newsom, despite the former not campaigning while the latter was a mainstay on the campaign trail.

Villaraigosa was the chief obstacle to Newsom’s candidacy. With the Latino leader out of the race, Newsom need only defeat Jerry Brown.

Unlike the challenge of beating Villaraigosa, defeating Brown is a task that Newsom can, and will, accomplish. Brown’s poll numbers reflect stronger name identification, but given his similarities with Newsom, Democratic voters will prefer the much younger version.

So Newsom is clearly the hands down winner from Villaraigosa’s non-entry.

And most folks I talk to agree.

Randy Shaw writes about the best days of Jerry Brown in his book Beyond the Fields: Cesar Chavez, the UFW and the Struggle for Justice in the 21st Century