Every Day Should Be “Bike to Work Day” 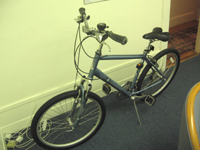 Today is “Bike to Work Day,” an annual event where the Mayor, eight Supervisors and tens of thousands of San Franciscans will highlight the importance, convenience and practicality of using the bicycle as your commute-vehicle of choice. But for me, it’s just another day – as my morning commute is a quick 10-minute bike ride downhill and my afternoon commute is a strenuous (but manageable) 20-minute ride uphill. In a City where we take global warming seriously, the distances are compact enough to make bike riding practical, and Muni service is unreliable, more people should use the bicycle as their primary form of transportation. But somehow, I’m part of an exclusive club (5%) of commuters in our supposedly enlightened community.

With a city that’s just seven miles by seven miles, why would anyone continue driving to work? Finding a parking spot is a nightmare, tolls on the bridge are going up, paying for parking gets worse, and let’s not even talk about the gas prices. And do I even need to talk about what driving a car does to the environment – even if you get a hybrid (which, let’s face it, still burns fossil fuels)? I have sometimes contemplated buying a car, but with all the financial headaches involved how could I even afford it? Paying rent in this city and paying off student loans is bad enough.

Public transportation is better for the environment, but it leaves much to be desired. Muni and BART are getting more expensive, and the service has declined. BART doesn’t go everywhere, so if you live outside of San Francisco you may have to take multiple forms of transit. And how many times have you had to wait twenty minutes for a Muni bus that’s supposed to come by “every 4-6 minutes”? How many times has the bus been so packed when it finally does arrive that the driver won’t let you on?

There’s a huge difference between being 5 minutes late for work and 35 minutes late for work. But for anyone who takes public transportation, risking that can happen all time. I live on McAllister Street, where the 5-Bus comes by. I live between Baker and Lyon (a white middle-class area) and work downtown, so even if I have to wait longer than I should for the bus to come in the morning, about 80% of the time it’s still empty enough that I can get on.

But when the bus crosses Fillmore or Webster (in a low-income African-American neighborhood), without fail it is packed to the gills. That means that all the people who are waiting at their bus stop can’t get on like I can. Which means they’re stuck having to wait for the next bus and be late for work, or else take a taxi. And they’re the ones less likely to afford a car and reliant on public transit.

I’ve been biking to work every day – not only because I enjoy it, but out of necessity. It guarantees that I make it to work on time. When my old bike got stolen four weeks ago, I had to ride Muni until I bought a new one for about three weeks. As a result, I was late to work almost every day.

Not to mention that biking is fun and keeps you in shape. During the three weeks that I didn’t bike to work every day, I put on weight and was feeling tired all the time. And while waiting for a Bus can be disempowering (you have no control when it will come, how often it stops or when you will get to your destination), biking to work gives you the same freedom and control that driving a car does. Except you’re not killing the planet.

My parents in Chicago are always incredulous as to how I can bike in San Francisco with all the hills. It’s easy. Join the San Francisco Bicycle Coalition, and you get a free map of the City – with all the streets color-coded by how steep the hill is. I became a member of the Bike Coalition when I moved to the City, and having that map was a wonderful welcome-gift to exploring San Francisco. I figured out how to go in between the hills.

“But biking’s not for everybody,” they say. If you’re elderly or physically disabled, fine. But I see a lot of people on Muni – and an inexcusable number who drive – who are perfectly capable of biking to work. It’s just a question of getting into the habit. As SFist said, “Bike to Work Day” is “a day to hop on your bike … and then gasp and flounder and struggle, because you only ride once a year.” C’mon, don’t be the butt of SFist’s jokes.

According to a poll last July, while only 5% of San Franciscans use the bicycle as their primary mode of transportation, one-third say that they would ride more if the City dedicated more bike lanes, designated more spaces for bicyclists, and improved the surface of roads. That means a small investment in our infrastructure would go a long way to getting people in a more efficient mode of transportation.

But Rob Anderson, a local blogger who is proudly “pro-car,” managed to get a court injunction to stop the City from implementing its own bicycle plan. Republican Judge James Warren (as a parting shot to the City before retiring) concluded that the City had not done its Environmental Impact Review. A law that was intended to protect the environment and measure the impact of a project was abused to prevent an eco-friendly city plan from going into effect. But activists expect this to be resolved shortly.

In the meantime, get into the habit. Take your bike to work today, and tomorrow. And make biking to work a fact of life that the City has to respond to. With more people biking to work every day, you won’t just improve your own life – but make the City far more sustainable and efficient.

And if you don’t believe me, go to Amsterdam and see what a true “bike-to-work” city is like.