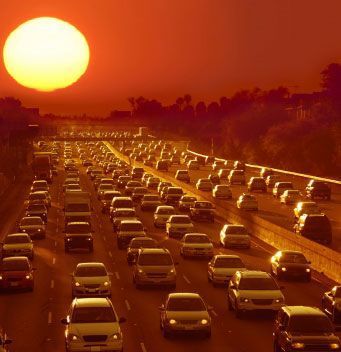 Americans favor transportation policies that would address climate change, such as increased transit and bike lanes, according to a new poll.

Last year was the third year on record that transportation has led our country in emissions. Why aren’t we talking about it?

he Transportation Research Board’s 99th Annual Meeting will be held in Washington, D.C. from Jan. 12-16, 2020. Click here for more information.

United States greenhouse gas emissions are down —but it’s not because anyone’s driving any less.

Overall carbon emissions were down two percent in 2019, but pollution from the transportation sector — the leading contributor to climate change remained basically unchanged, though no longer increasing as it has every year since 2012.

Last year was the third straight year that transportation emissions remained above power sector emissions, which have been falling, according to the Rhodium Group. Electricity and heat production had been the planet’s biggest pollution problem for more than 60 years.

Emissions did decline .3 percent last year, though that’s “essentially flat,” reported Inside Climate News — a result of minor improvements in fuel efficiency rather than Americans opting to bike, walk or use transit, added Hannah Pitt of Rhodium.

Indeed, a recent Department of Transportation report showed that Americans actually drove more between April 2018 and April 2019 than during any 12 month span on record. Another report showed that cycling and walking rates have remained stagnant for the last decade.

In a country where eight in 10 citizens believe that human activity is fueling climate change, it’s baffling to many climate advocates that reducing automobile emissions isn’t a bigger part of the conversation.

“Conversations about cultural changes to the way we live, travel, and move are buried under the auto industry’s lobby, which puts the bottom line before responding to the climate crisis,” said Monica Mohapatra of 350.org, which seeks to “end the age of fossil fuels.” “It’s imperative that Americans who understand the risk that climate change poses organize against corporations that take the responsible choice away from them.”

The automobile and oil industries are easy to blame, but elected officials are ultimately responsible for enabling an auto-centric road network that prioritizes cars over walking or biking, and continues to fund new highway construction at the expense of transit. The result is that Americans continue to kick the can of personal responsibility down the road. Indeed, if America is going to reduce its fossil fuel emissions, 20 percent of the reduction must come from trips avoided or shifted from cars to train, bus and bike, as Streetsblog reported.