The Next U.S. War Should Target Poverty 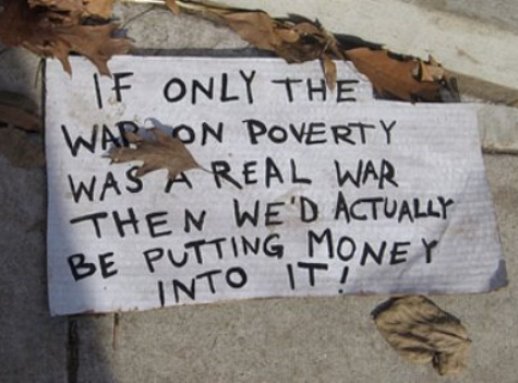 The U.S. media is eager for war. And while its target is Iraq, activists have a golden opportunity to reframe this into a debate about spending priorities. On issue after issue—education, housing, health care, transportation, student debt—the American people are being shortchanged because Beltway wisdom says that the U.S. cannot “afford” solutions. Yet if we can send hundreds of millions of additional dollars to Iraq, the money is there for tackling poverty, inequality, and key domestic needs.

Is the United States still trapped in the mindset that led Lyndon Johnson to sacrifice his War on Poverty for a war in Vietnam that he knew could not be won? President Obama is trying to change this mindset but needs activist support to resist the national media drumbeat for U.S. military action—if not in Iraq, in Africa or the Middle East.

Progressives’ biggest failure during the Clinton and Obama presidencies is the lack of increased domestic spending. Blame Congressional Republicans for much of this, but Democratic Presidents and Senators have not fought hard enough to make a difference.

As a result, funding for housing, education, and other domestic needs falls further behind while defense spending grows. We have gone from Clinton’s “peace dividend” in his 1993 budget to Obama’s accepting the skyrocketing defense spending increases in the Bush-era. Many attack Obama’s NSA and droning policies, but there is barely a protest over Democratic Party acceptance of a U.S. military budget bigger than all other nations combined.

I recently saw a story that described the cost of providing Section 8 housing subsidies to all eligible families as a “prohibitive” $60 billion. Yet that’s a fraction of the trillion dollars that went down the rabbit hole in Iraq. $60 billion is a relatively small investment to get homeless families off U.S. streets, and unlike military spending, all of this spending recirculates in the U.S. economy.

The current “debate” over how many more billions to throw away in Iraq comes as Obama and Democrats have failed to get Republicans to back a modest proposal to reduce student loan debt. While the timing isn’t ideal– Obama is waging a student loan fight when college students are out of school (!)— student debt highlights how progressives can use the drumbeat to war to mount a national campaign over funding priorities.

Instead of focusing on small scale changes that will not lift most students from crushing debt, progressives should be promoting the public funding of four years of college as we now fund high school.

What better way to engage young people in national politics than to promote a plan that puts them in the same position of young people prior to the post- 1990’s tuition explosion. And to critics claiming the U.S. cannot afford it, progressives will point to the Iraq War and other costly military endeavors to say “Yes We Can” to free tuition for all.

Democrats looking for a strategy to get young voters to the polls in November have the perfect issue. And with Republicans flooding talk shows urging new and costly military intervention, free college tuition offers Democrats a powerful counter-narrative for how the nation’s resources are best used.

While Republicans and their media allies promote a war abroad, millions of Americans are already engaged in their own war—against poverty at home. Local minimum wage campaigns are sweeping the nation, creating broad coalitions supporting this critical step in the war on poverty.

The drive to get Republican Governors to allow poor people to get federally-funded health insurance is also part of this new anti-poverty war. Yet the human costs of 21 states denying this vital coverage has gotten far less media attention that the “militants” fighting in Iraq.

This is the 50th Anniversary of the launching of the War on Poverty. Accounts of its legacy have taken on a wistful quality. While conservatives see the nation as “naïve” for thinking it could meaningfully reduce poverty, progressives see this brief period of targeting of resources to the poor as among the nation’s finest hours.

This battle over sending more billions to Iraq creates a new opportunity to reframe how the nation spends its money. And just as protesting fast food workers ignited a new movement for a higher minimum wage, the Iraq fight could show millions that the United States has plenty of money to reduce student debt and otherwise serve people’s needs—if it so chooses to use it.