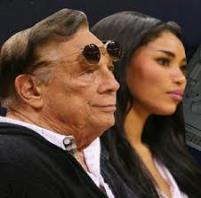 As much as we’d like to place Clippers owner Donald Sterling’s racist rants in isolation (and Commissioner Silver issued a lifetime ban on Sterling today), they followed a U.S. Supreme Court ruling upholding Michigan’s abolition of affirmative action, and its prior holding that the Voting Rights Act was no longer needed. They also emerged after FOX News praised a Nevada cattle rancher who believes slavery was good for African-Americans, and after NBA Commissioner Silver repeated his insistence that the NBA should deny a livelihood to the (overwhelming black) players under 20.

As Dean Preston wrote in our pages in 2009, “NBA: Discipline Team Owner for Housing Discrimination,” Donald Sterling is a racist who has no business owning an NBA team. Yet he was allowed to do so by the same passive approach to racial bias that has become business as usual in much of the nation, and particularly in the world of sports.

“We Are a Black League”

Charles Barkely’s response to Sterling’s comments, “We are a Black League,” was a remarkably honest statement that would never have been made by such a high-profile NBA voice only two decades ago (Barkely also called Sterling a “Jackass.”) From Lebron James to Michael Jordan to Magic Johnson, the Mount Rushmore of NBA players condemned Sterling in explicitly racial terms.

Sterling offers an easy case of racism. Less discussed in racial terms is Commissioner Adam Silver’s insistence that young basketball players not be allowed to play in the NBA until age 20. While the NBA players association would have to agree, the fact is that this age threshold would distinguish the NBA from every other professional sport.

The NBA is a “black league,” and one is hard pressed to find a non-racial explanation for an age requirement that would disproportionately and overwhelmingly impact young African-Americans.

While the NFL’s age requirement reflects the sport’s physically punishing nature, all of the arguments in favor of keeping star black basketball players in college until age 20 would similarly apply to MLB, the NHL and professional golf and tennis. Yet only the NBA is so concerned about its image as a “black league’ that it would deny young basketball stars their right to earn a living.

At his press conference responding to Sterling’s comments, Commissioner Silver highlighted how the NBA unites players of all races and nationalities. Yet he is zealously promoting age restrictions disproportionately impacting blacks. Meanwhile, the NBA has shown no sympathy for the young black college stars that make millions for their coaches and schools but go to bed hungry at night due to their lack of money.

Former Clippers General Manager Elgin Baylor has famously described Sterling’s “plantation mentality” in owing the team. Yet when disproportionately black college basketball players work for free while making millions for white coaches, white alumni, and primarily white schools—-with few even graduating—we call that offering them opportunity, rather than labeling it as racial exploitation.

Maybe Sterling’s comments will force sportswriters to spend as much time explaining why only 10% of the 128 Division 1colleges have black football coaches. While this is up from only 4% in 2004, the remarkable fact is every one of the 28 black head coaches fired or forced to resign was followed with a white coach as successor.

Even Division 1 college basketball only has 18% black head coaches. If Kentucky and UConn only had 18% black players on their teams, they would not even play in Division 1, rather than playing for the title.

The NFL and MLB also have far fewer racial minorities as head coach, despite baseball in particular drawing managers from the ranks of former players. And when we start talking about General Managers, blacks and Latinos are as represented as they are in Augusta National.

I applaud the current and former NBA players for their honesty in talking about race. But once Sterling gets his punishment, expect black representation in front-office positions and the racial dynamics of the proposed 20-year age limit to be downplayed if not ignored—after all, as Commissioner Silver put it, we’re a league where diverse races get along.