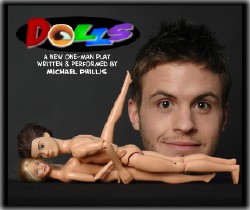 Pardon me if I gush, but Michael Phillis (Actor and Playwright) is by far one of the Bay Area’s most talented actors. His new play “Dolls” comes with lots of bite … laden with funny twists that blends humans and dolls in a rollicking tale of redemption, and a teenagers wide eyed fixation on his dolls. To him, they are real people. And you know what? … The Cool special effects made a believer out of me.

The humor is sharp and quirky. Some of the Dolls are Super-hero action figures – but even they can become obsolete in this fast moving delightful play that wanders in an out of the real world. Hey, if you really wanna have a good time – you sure can find it in Dolls with its cheeky highflying excitement as we listen to what the Dolls have to say about their lives. And they are wiser than you might think. Even Dolls have their likes and dislikes and yes, there is a class system in the Doll world, just like the human world.

Some live on the top shelf and others are relegated to the bottom drawer. But as one Doll tells us (an action figure) – it’s comfy and cozy in there and a lot of space. Because he now had a broken hand, which made him limp wristed — he was no longer a valuable action figure. His disfigurement took him out of battle, so to speak, but it didn’t shut him up.

During orientation day when a batch of new freshly-unboxed Dolls arrive (the audience) at the Teenagers home – the new Dolls are greeted by an unstable porcelain Southern belle that tells the new arrivals what they can and cannot do. You also get fashion tips from the “Fashion Dolls” (male and female). One of the Dolls says during the orientation that most of the Dolls are made in China or Taiwan, except for few that you will find on the Top Shelf. The Porcelain Doll says: “I’m known as TOP SHELF” She continues – “Today, it’s all about you, so lets start with me.” Oh, and you’ll also find a Barbie knockoff on the 3rd shelf. You see — Frank (the Teenager) is known to buy “Ben’s” (as opposed to “Ken’s”). The off Brands are cheaper.

There’s nothing like a Star on fire. And let my tell you – Michael Phillis is THAT Star. His Beam shines so far that you will follow him anywhere. “Dolls” is the season’s most enchanting surprise. This play is just hilarious and heartfelt. I never wanted it to end. I have never really seen anything quite like it.

In fact – guess what? I went home to play with my Dolls.

THE DIRECTOR ANDREW NANCE, Completely knocked this one out of the park. The pace is consistently funny! John Kelly gave us some great and unusual lighting design. And Matt Stines gives us the extremely, great stirring sounds that are enough to make you cheer. Michelle McCoskey gave the scenery lots of “Pop” with her scenic painting.

>>>More on “Dolls” in THE DAY Section

EDWARD ALBEE’S Pulitzer Prize-winning “A Delicate Balance” is setting records for advance tickets at the Custom Made Theater space @ the Off-Market Theater on Mission near 5th Street. In the play, a quite life takes an unexpected turn as the delicate balance of a family begins to unravel. MORE INFO: www.custommade.org. Starring are Jean Forsman and Dennis McIntyre. Katya Rivera directs.

GREASE IS SLIDING INTO THE GOLDEN GATE THEATRE ON MARCH 24. This time around the beloved, fun musical will also have songs from the motion picture that starred John Travolta and Olivia Newton John. This will be a first for the Broadway Production. And you Idol Fans will be thrilled to know that Taylor Hicks of Idol Fame will star as “Teen Angel” in this new production. Hicks, I’m sure you will remember was an Idol Winner a couple of seasons back. Starring with Hicks will be Eric Schneider as “Danny” and Emily Padgett as “Sandy.” You know the story. It’s about teenagers in love, who say things like: “Forget it! Forget me! I’m fed up with your kind!” What fun – I can’t wait to see it again. Love the songs – “Sandy”, “Hopelessly Devoted to you”, “Beauty School Dropout” and “You’re the One That I Want.” Be sure to “Grease” your Hair. I would, but not enough strands to make it work. INFO: www.shnsf.com.

THE SANTA ROSA 6th Street Playhouse will present a special red carpet gala event in April featuring Santa Rose native Jim Jarrett, who will perform the one-man play VINCENT, by LEONARD NIMOY. Jarrett recently returned from England where he performed Vincent to packed houses and critical acclaim in theaters in London and surrounding area. In 2008, Jarrett won as a Best Solo Performer finalist at the Edinburgh fringe Festival. The special event in Santa Rosa is called “Starry, Starry, Night” and it will be an elegant affair that features gourmet food, specialty wines, a silent auction and a specially arranged art exhibit. Proceeds benefit the 6th Street Playhouse educational programs and productions. And you can rub elbows with famed professional artists who live in the area. “Vincent” is set in a lecture hall in Paris. There are many witty asides and caustic rejoinders in this engaging play that opens up many vistas to Van Gogh. FOR INFO: www.6thstreetplayhouse.com.

THE UNIVERSITY IS NOW HOME TO THE CANADIAN CENTRE FOR THEATRE CREATION. Ian Leung, the Administrator for Theatre Creation says: “The Goals of the Centre is to bring together independent artists and Theatre Companies that will experiment with new approaches to theater-making.” The Canadian Centre has commissioned a new play by Elyne Quan, a rising Canadian playwright. The play will be staged and promoted nationally and internationally. INFO: www.ileung@alberta.ca.

YOUR SHIP HAS COME IN! — OR WILL SOON BE ARRIVING AT THE GOLDEN GATE THEATRE

FA-LASH!!! The Musical Hit ‘South Pacific’ will be docking at the Golden Gate Theatre with a big splash that will electrify the Golden Gate theatre. It might even light up the big Golden Gate sign on the building that has been dark for many years. “Nothing is better than a Dame”, as they sing in the musical and nothing is better than ‘Electric and neon lights” is what I sing every morning in the shower. South Pacific won 7 Tony Awards, including Best Musical Revival, plus many other awards. The musical will take the place of “Ever After”, which has been indefinitely postponed. “SHN is privileged to present Lincoln Center’s celebrated Tony Award-winning South Pacific” – said SHN President Carole Shorenstein Hays. This new production features a cast of 40 with whiz bang musical staging by Christopher Gattelli. An orchestra of more than 20 will perform the original orchestrations. Yep, this is not your Grandfather’s “South Pacific.” The spiffed up SP has plenty of imagination and magic to amaze and seduce. It will premiere at the Golden Gate in Sept. 2009. Info: www.shnsf.com. You won’t want to “Wash that Man Right out of YOUR Hair!”

THINGS NOT TO MISS

HE’S A ‘DOLL’! That would Michael Phillis in his one-man extravaganza at the NCTSF Theater center. Here are some reasons: Singular Energy, Joy, Acting of the highest order, never goes quite where you think it will. And finally “Dolls” is lucid and absorbing and profoundly funny and moving. WINNER! The Lee Hartgrave FAME AWARD for Best performance in a solo play in 2009.

WICKED – The Green Witch has been spotted circling the Orpheum Theatre just before sundown, and lucky me. As she made one mad swoop down to the roof of the Theatre, her Green round glasses fell right onto my fedora. Since I don’t have a broom and don’t fly anything, I had no choice but to put them on. But I will wear them and then return them to her following the opening night performance of “Wicked”. This is the musical of all musicals. I have already seen it three times. FOR MORE INFO ON TIX AND HOW TO JOIN IN THE LOTTERY FUN FOR CHEAP TIX. CHECK OUT: www.shnsf.com.