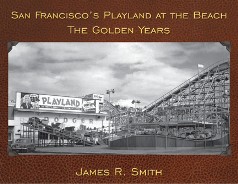 New York City has Coney Island, Chicago has Navy Pier, Los Angeles has Universal Studios and nearby Disneyland, and San Francisco has….well, until 1972 the city had Playland at the Beach. Playland was demolished to make way for new condominiums, whose subsequent mold and financial problems were seen by many as cosmic justice for the tearing down of the city’s beloved Playland. Three years ago I reviewed James Smith’s book on the early years of Playland, and he has now produced a second volume, San Francisco’s Playland At the Beach: The Golden Years. Sadly, the “golden years” were not sufficiently profitable. Children still enjoyed Playland but adult attendance fell off. It was not recognized at the time, but Playland’s demise was part of a larger decline in San Francisco’s attractions for young people, as bowling alleys, pool halls, and pinball arcades also bit the dust.

I never saw Playland in action, but always had fond feelings about it. My appreciation grew when I discovered the joys of eating an It’s It (invented in Playland), the marvels of the Musee Mechanique (now at Pier 45), and saw photos of happy crowds at the Big Dipper and other Playland attractions.

Playland evoked memories of my childhood experiences at Santa Monica Beach’s Pacific Ocean Park. POP opened in 1958 and closed in 1966, and I still have vivid memories of being at the park in 1964. Amusement park experiences have a way of lasting, and I suppose current generations of San Francisco kids get their memories from the Santa Cruz Beach Boardwalk, Disneyland and other attractions outside their home city.

Smith’s new volume shows a Playland trying to adjust to a changing world and a more modern San Francisco. In 1969, Chet Helms opened his final Family Dog concert hall at Playland. Joan Baez was the first headliner, and top acts such as Country Joe and the Fish, the Grateful Dead, Santana, Eric Burdon & War, and even the Kinks soon followed.

Reading that lineup, one would assume that the Family Dog concerts alone could have produced enough profits for Playland’s survival. ButHelms’ “business skills did not match his strength as a visionary.” The Family Dog at the Beach closed in August 1970, having barely lasted a year.

It left a legacy in photos and memories of those attending the concerts, but one wonders if real estate speculator Jeremy Ets-Hotkin could have carried out his diabolical destruction of Playland had the Family Dog survived. Its audiences could have created the mass grassroots opposition to Ets-Hotkin’s plans that never emerged at the time.

The lack of ongoing public protests either at Playland or City Hall, or a ballot initiative to prevent the demolition, demonstrates how different San Francisco was in 1972 from today. The city was comprised of many of the same people who voted to destroy the historic 4651-seat Fox Theater movie palace on Market and 9th Streets in 1963 (current site of Fox Plaza), who allowed Mayor Christopher to send the Giants to windswept Candlestick Park, and who approved Nieman Marcus demolishing the historic City of Paris building in Union Square in 1980.

San Francisco from the late 1950’s through the 1970’s suffered from a crisis of confidence. City and business leaders feared that, unless drastic action was taken, that the city’s economy would be overtaken by suburbia. These fears fueled the Redevelopment Agency’s mass leveling of SOMA’s working class community, and, joined by racism, led to its demolition of the Fillmore.

Playland’s fate was actually sealed when the Whitney family that long managed the park sold it to a bad new owner in 1968. By the time Jeremy Ets-Hotkin bought Playland in late 1971, its popularity had waned and there were disputed reports of racial conflict and even minor riots.

But Playland’s internal problems do not explain why San Francisco did not mobilize to save its lone amusement park. Other children friendly activities could have been carried out at the site, yet no alternative to Ets-Hotkin’s planned demolition emerged.

When people complain about current San Franciscans challenging land use plans, they should recall all of the terrible losses to the city caused by an unaroused citizenry of the 1950’s-1970’s. San Francisco would be far better off with an amusement park at Ocean Beach than the nondescript condos that replaced Playland; and the revival of the historic Beach Chalet and the planned youth soccer for the area shows that this western border of San Francisco is still a place people will come to for fun.

Randy Shaw is Editor of Beyond Chron. His new book is The Activist’s Handbook, Second Edition: Winning Social Change in the 21st Century