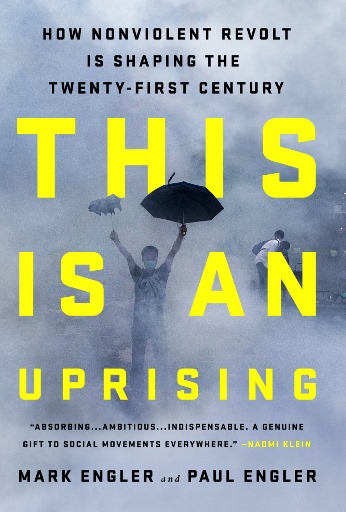 While young people are supporting Bernie Sanders’ presidential campaign, many do not see electoral politics as the surest route to progressive change. This is understandable. Popular movements around African-American and women’s’ civil rights, the Vietnam War, and the negative impacts of global free trade all emerged outside traditional political structures. Meanwhile, hopes that Barack Obama could replicate FDR’s transformative impact in the White House proved illusory. Activists increasingly believe that responding to a “rigged” system requires people taking to the streets.

Mark Engler and Paul Engler have studied mass movements around the world for some time. Their new book, This is an Uprising: How Nonviolent Revolt Is Shaping the Twenty-First Century, offers an ambitious, sweeping analysis of how uprisings do and do not bring progressive change.

In contrast to a book on 21st Century movements I reviewed last month, When We Fight, We Win, this work also looks back to older mass protests campaigns. Central to their analysis are lessons drawn from the 1960’s African-American civil rights movement, as they analyze why Albany, Georgia protests that began in late 1961 failed while Birmingham’s in 1963 were a big success.

Like my own book, The Activist’s Handbook, the Englers’ are interested in why campaigns succeed or fail. They make a very important point about defining victory in the context of anti-globalization protests in Washington, DC in April 2000 that followed the hugely successful November 1999 shutdown of the WTO meeting in Seattle in 1999.

In Seattle, activists “blockade” strategy took police by surprise. But police at the A16 protests that followed figured out how to prevent protesters from blocking entry and the meeting occurred as scheduled. The Englers note that many activists saw this as a failure when in fact the protests “brought unprecedented attention to criticisms of World Bank and IMF policy—and that in time, the wider global justice movement helped produce victories worth billions of dollars around such issues as debt cancellation in the Global South.” Despite this success, activists “absorbed the media’s negativity” and “many felt demoralized.”

One can find similar questions over what constitutes victory or defeat throughout this book. It’s a vital yet complex question. Is Egypt’s revolutionary movement a failure due to the eventual installation of a dictatorship not that different from the Mubarak regime? Or should it be seen as the authors do, which is “a perfect case study of what can be accomplished by mass mobilizations that harness the power of disruptive protest—-and of the limitations of these mobilizations.”

The authors discuss a wide range of mass movements, including activism that boosted gay marriage, increased support for funding against AIDS, and led to mass support for protecting immigrant rights. The book addresses strategies of Gandhi, Francis Fox Piven, Gene Sharp and others who lay out case studies for what makes movement strategies a success.

The book has little discussion of the movement behind #BlackRightMatter, arguably the strongest example of how a nonviolent grassroots campaign transcends electoral politics. In city after city, nonviolent protest against police violence against African-Americans has succeeded in changing public perceptions toward the status quo. From mass protests in Baltimore to the protests of Ferguson to the police shootings in Chicago and San Francisco, a strategy of disruption and mass protest is changing police-community relations.

Black Lives Matter relies on disruption, not organization building. And it is a classic example of what the authors describe as the “craft” of organizing– protests that appear “spontaneous,” “unplanned,” and “emotional” are from random and are actually carefully planned.

Of all the many subjects tackled by the authors, their strongest argument for the power of mass protest involves what happened to the U.S. immigrant rights movement. As I detail in Beyond the Fields: Cesar Chavez, the UFW and the Struggle for Justice in the 21st Century, the mass street marches for immigrant rights in 2006 was a landmark event in U.S. history. The UFW’s organizing model built immigrant rights into a mass movement that seemed to have bipartisan support for a path to citizenship for 10-12 million undocumented immigrants.

But as the Englers note, Congress stalled and then killed this path to citizenship. Instead, it took a strategy of disruption by young Dreamers to get young people a path to legalization. And while Barack Obama’s Executive Order protecting up to five million now depends on the Supreme Court’s approval, there would have been no such Order absent mass protest and disruption.

On issue after issue—immigrant rights, gay marriage, police shootings, protests against nuclear power to name but a few—the Englers show how and why mass protest prevailed over electoral politics. This is one of the many reasons why This is an Uprising is a worthwhile read for all activists, and a strong choice for book clubs and all those eager to debate how best to achieve social change.

Randy Shaw is Editor of Beyond Chron. His new book is The Tenderloin: Sex, Crime and Resistance in the Heart of San Francisco.