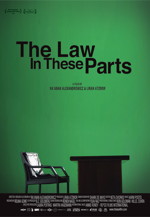 Ra’anan Alexandrowicz cleverly uses a spartan elevated desk and chair plus a projection screen to put Israel’s special laws for the Occupied Territories on implied trial. Alexandrowicz’s documentary, The Law In These Parts, interviews some of the men who interpreted the post-Six Day War laws imposed on Israel’s newly captured lands.

This supposedly arid approach leads to the devastating realization that these laws’ aspirations to justice and fair treatment were mocked by the real world effect of legally legitimizing such heinous anti-Palestinian actions as openly carrying automatic weapons on an alleged cultural tour. The prejudices and mental blindness revealed by the interviewees will not earn Alexandrowicz many fans among Jewish right-wingers dedicated to shutting down any criticism of the Israeli government.

Other things besides video cameras get broken in Emad Burnat and Guy Davidi’s powerful personal and political documentary 5 Broken Cameras. These damaged items include the innocence of Burnat’s son Gibreel and the sense that the Israeli settlement issue can be peacefully resolved. But the Israeli government’s rule of law is the most understated item broken in Burnat and Davidi’s bittersweet chronicle of Bil’s non-violent struggle against Israel’s separation barrier. Israel’s eminent domain apparently involves grabbing as much Palestinian land as possible for Jewish settlers.

Molleindustria’s Radical Games Against The Tyranny Of Entertainment repurposes videogame technology to provide sociopolitical critiques. A player wins in one game when their oil company’s stock price is kept elevated by buying off politicians and causing environmental devastation.

Jon Wright’s Grabbers enjoyably makes heavy drinking a survival tactic. This unapologetic tongue-in-cheek monster movie balances in proper measures action, humor, chills, a few memorable characters, and lots of drinking. Given that the story of an alien monster attack takes place on an isolated Irish fishing island, perhaps a viewer may be forgiven for muttering Only in Ireland.

Bishop Gene Robinson displays an admirable amount of equanimity for someone who’s upended quite a few believers’ conceptions regarding the relationship between Christianity and the LGBT community. As portrayed in Macky Alston’s endearing new documentary Love Free or Die, the New Hampshire gay bishop sees his consecration as only a matter of common sense. But what to Bishop Robinson seems merely reasonable becomes to other a cause for public disrespect and hostility. The honor of attending a once-per-decade worldwide convocation of bishops is one denied Bishop Robinson on orders of Archbishop Rowan Williams.

Alston’s portrait of Bishop Robinson’s high-profile life takes the viewer from a London AIDS hospice to Barack Obama’s presidential inauguration. Beneath Bishop Robinson’s acts lies a hope that the better angels of his church’s followers will stop seeing a contradiction between practicing Christianity and an openly LGBT life. Love Free or Die gives the viewer hope that the bishop is right.

Maria White’s short The Debutante Hunters should not surprise those familiar with fox hunting. But this portrait of several wealthy female hunters will disconcert those who think of hunting solely as a sport promoting male bloodlust. The reasons these women hunt, ranging from obtaining better-than-supermarket meat to fostering respect for nature, may make one wonder about the reasonableness of one’s anti-hunting views.

Kieran Dick’s experimental short documentary No Relation challenges the reality of what film shows them. It’s an appropriate approach given that the film’s subject, late science fiction writer Philip K. Dick, used this same approach in his fiction. Viewers may believe authors Kilgore Trout and Horselover Fat are credible authorities on Dick. But only those familiar with science fiction of the 1960s and 1970s will know why those two interviewees should be suspect. Otherwise, No Relation is a mildly interesting cinematic rabbit hole.

Sadness at Thailand’s economic inequality rather than anger at apparent child exploitation needs to be a viewer’s reaction to Todd Kellstein’s heartbreaking documentary Buffalo Girls. The film follows two 8-year-old girl Muay Thai boxers named Stam and Pet as they eventually face each other for the national Muay Thai championship. Western viewers may perceive the sport as unprotected children giving each other serious bruises and even broken bones for the adults’ amusement. Yet given Thailand’s extreme poverty, child boxing is one of the few alternatives outside of the sex trade for poor Thais to earn lots of money.

Buffalo Girls does exhilarate viewers as we see the skill and dedication of both Stam and Pet as they undergo grueling personal training. The film also makes the viewer sympathize with each girl’s motivation for fighting. However, the terrible reality is that despite the worthiness of both girls’ causes, the fight system ensures that only one fighter can prosper at the end.

Kellstein’s film would have had greater impact had it taken a few moments to establish why child boxing is considered a reasonable economic avenue in Thailand. That lack of context robs Buffalo Girls of hinting at a bigger story beyond Stam’s and Pet’s struggles.

Jason Shahinfar’s A Short Film About Ice Fishing is short enough to ease viewer unrest over the setup of its first half. The film’s ultimate entertainment comes from its milking the comic potential of burning dynamite.

Brian Knappenberger’s documentary We Are Legion: The Story of the Hacktivists utilizes a meat-and-potatoes style in informing viewers about hacktivist group Anonymous. It chronologically charts such predecessors to Anonymous as Cult of the Dead Cow. Interviews with former and present day Anonymous members put human faces on a group media hysterics have described in alarmist terms. Then again, former Anonymous members have faces courtesy of law enforcement arrests.

While law enforcement has seen Anonymous as stuck in malicious prankster mode, Knappenberger’s 101 treatment shows how the group has facilitated bigger social justice causes such as the Egyptian Revolution. Given the increasing prevalence of surveillance culture, Anonymous’ hacktivists could very well be ordinary citizens’ last best guardians for freedom of information. But it is very dubious that even the best hacktivist possesses the resources to prevail against such extra-legal entities as Mexican drug cartels.